After The Other Guys – a movie that was funny but forgettable – there were a good number of people who were hoping for either a sequel or another movie in which Will Ferrell and Mark Wahlberg teamed up to bring us a comedy. Well, that and a spin-off featuring the characters played by Samuel L. Jackson and Dwayne Johnson. The first wish has been granted with Daddy’s Home, a movie which pits Ferrell and Wahlberg against each other in an attempt to win the affections of a couple of children, all while learning what it takes to be a real parent.

The premise is this: Brad (Ferrell) has recently married Sarah (Linda Cardellini), who has two children (Scarlett Estevez and Owen Vaccaro) from a previous relationship. That relationship was to Dusty (Wahlberg), who wants back into the familial picture. Since there’s only room for one male role model, the two engage in a game of one-upmanship to prove superiority over the other. Brad is a bit of a pushover, while Dusty is the epitome of cool, so they each have different ways of going about this. That’s essentially the entire idea behind Daddy’s Home. 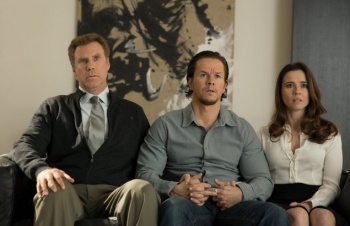 If you’re looking for a movie in which two people with good chemistry together fight it out for the admiration of a couple of kids, then you’ll be happy because that’s what you get with Daddy’s Home. The best moments come from the fights between Ferrell and Wahlberg, as the two work really well together. Wahlberg’s tough-guy, cool-dad persona is so effective because of Wahlberg’s unnaturally sincere delivery, while Ferrell is so easy to believe as the mild-mannered, play-by-the-rules guy who just wants to be loved that it’s scary. Together, they work magic. As forgettable as The Other Guys was, at least I can remember how much fun these two actors were.

The same is true of Daddy’s Home. Ferrell and Wahlberg are hysterical, and the antics they get up to are quite enjoyable, but the movie surrounding them is pretty much just fluff. Sometimes it’s funny fluff, but Daddy’s Home is the type of movie that you just won’t remember even a few days – or, with some parts, hours – later. But while you’re watching it? You’re going to laugh a good amount. It’s not the funniest film of the year, but there are a decent number of laughs scattered throughout its running time to make it worthwhile.

With enough laughs to make it worth seeing, Daddy’s Home is a film you’ll forget just a few days after you watch it, but if you’re looking to kill a couple of hours with a comedy, you can do a lot worse.

However – also like The Other Guys, actually – a lot of the film feels like it probably would have been funnier if the filmmakers had been allowed to have an R rating. There are some ideas here that are inherently funny, but they’re not allowed to be carried out to their full potential because of the restriction of a PG-13 rating. We don’t need prolonged profanity or anything, but there are a few scenes that would have been better if some F-bombs could have been dropped.

I will say that, at least for me, one of the funniest single moments of the year came from Daddy’s Home, and since it happened right at the end – literally in the last scene – it made me leave with a bigger smile than I otherwise would’ve had. The way a movie ends can color your opinion on it in its entirety, and Daddy’s Home ended fantastically. It’s a moment I don’t want to spoil – if you really want to know, you can look it up online – but it’s something that’s both funny on its own and even funnier after taking into account another comedy from earlier in the year.

Some of it doesn’t work at all. Thomas Haden Church‘s sexist and racist rants are more uncomfortable than funny. Hannibal Buress is a welcome addition to any cast, but most of his one-liners fall short. Linda Cardellini doesn’t get a whole lot to do. And the children aren’t exactly good actors, but they’re children, so that’s to be expected. We’re primarily here for Ferrell and Wahlberg shenanigans, and Ferrell and Wahlberg shenanigans are what makes the film successful.

With enough laughs to make it worth seeing, Daddy’s Home is a film you’ll forget just a few days after you watch it, but if you’re looking to kill a couple of hours with a comedy, you can do a lot worse. Ferrell and Wahlberg recapture the chemistry they shared in The Other Guys, the premise is at least somewhat interesting and leads to more than a few funny moments, and while it’s mostly just fluff, it’s entertaining fluff. It also contains one of the comedy highlights of 2015, at least for me, so that counts for something, too. Daddy’s Home is funny, even if it’s likely best used as filler between more taxing films.

Recommendation: If you want to pass the time with a comedy, Daddy’s Home is a fine option, especially if you like the leads.