Dark Ascension is looming now with the first week of previews complete. Many of the Rares and Mythic Rares of the set have been spoiled. I’d like to take this week to discuss some of the exciting new cards we’ll be seeing with the release of Dark Ascension and how they interact with Innistrad. You can check out the full official preview list here if you’re hungry for more!

First we’ll look at White with the likes of Gather the Townsfolk, Increasing Devotion and Thraben Doomsayer. Gather the Townsfolk is a Sorcery speed Raise the Alarm, which is a bit of a drop in power. With Fateful hour active, when the caster is at 5 or less life, it’s a whole lot more. Unfortunately, that seems a dangerous plan to me with the likes of Brimstone Volley being a very real threat. All three of these cards synergize very well with Champion of the Parish and Intangible Virtue from Innistrad, triggering the Champion’s Ability and getting a massive power boost from Intangible Virtue.

Loyal Cathar/Unhallowed Cathar introduces a new ‘when this creature dies’ Transform mechanic, turning a virtuous Human into a mindless Zombie after death. I can’t think of a more thematically appropriate card in the set, to be honest, and I’m hoping that he’s as good in practice as he is in style.

One of the most exciting cards in Blue for me is Secrets of the Dead. I’ve been working on a Burning Vengeance Flashback build and that seems like it may help to take the power level of that sort of deck over the top! Beguiler of Wills can be very powerful in any build that sees a few creatures on the Battlefield. She’s very susceptible to pretty much any removal like Geistflame, though, so it is going to be a challenge to keep her alive for long. Increasing Confusion looks like it continues Innistrad‘s seeming attempt to make Mill decks viable, though I’m not sure it is quite up to the requisite power level to make that happen.

Zombies are getting some more love in Black with Gravecrawler, who can be cast from your Graveyard as long as you control a Zombie. He’s already fairly efficient at 2/1 for B, so I hope to see a resurgence of Zombie decks featuring him given the prevalence of affordable Zombies in Innistrad. Of course no Zombie themed deck would be complete without a good old fashioned Zombie Apocalypse. Bringing all of your Zombies back from the Graveyard and destroying all Humans to boot, this is probably second only to the Loyal Cathar for the Horror theme.

Red’s reveals include a new Werewolf, Mondronen Shaman/Tovolar’s Magehunter, who’s a powerhouse once he Transforms since any player trying to Transform him back is going to take 4 damage from his ability. I’m pretty pleased with where they’ve taken some of the Werewolf creatures, rather than keeping with the theme of Innistrad and just making them beefier creatures with an occasional keyword ability. Moonveil Dragon is another interesting nod to Red, giving a Firebreathing effect to your whole team! Nearheath Stalker features the other new mechanic, Undying. When the creature dies, as long as it had no +1/+1 counters on it, it comes back into play with a counter. This is a great ability, but I’m not convinced it’s placed well on this Vampire as Rakish Heir and Curse of the Stalked Prey provide a kind of anti-synergy with the Undying ability.

Green’s Strangleroot Geist also features Undying. This ability is basically an improved Persist where creatures with Persist instead came back with -1/-1 counters. I’m just hoping to see some Undying creatures with ‘Enters the Battlefield’ triggers to really take advantage of it. Green also shows us a new Morbid spell, Hunger of the Howlpack, which is a permanent Giant Growth. I love Giant Growth, so making it permanent for the same cost is a little bit mind-boggling and synergizes very well with Undying, making your Strangleroot Geist 6/5 after recurring to activate Morbid! We’ve also got another Werewolf featuring a nice flip-side ability in Lambholt Elder/Silverpelt Werewolf who draws you a card each time he connects with a player in combat, though his lack of evasion makes that seem unlikely to happen very often. 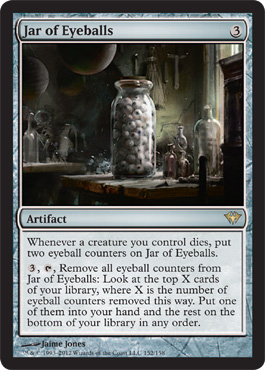 Artifacts are slim pickings so far, but those we’ve seen have really kept to the Innistrad sense of style. Jar of Eyeballs, for example, is a decent long-term draw engine and tells its own story, using the eyes of your fallen minions to let you pseudo-Scry and draw. Altar of the Lost is another card that fits nicely into the Innistrad theme, providing any color mana you need, as long as you’re using it for Flashback. That Forbidden Alchemy just got a lot easier to Flashback in UR Burning Vengeance without having to clutter up the mana base!

Finally we get to my favorite color of all; Gold! The multicolored cards are back in force with Dark Ascension, and feature powerful creatures for the major tribes. Drogskol Reaver for Spirits is a bit costly to cast, but drawing two cards and netting 6 life each time it connects with a player is very powerful. Havengul Lich lets you cast a creature from any Graveyard, and can make use of that creature’s Activated Abilities for the rest of the turn. I’m not quite as impressed with the Vampire, Falkenrath Aristocrat, though with a steady supply of Humans (say with Thraben Doomsayer) you can definitely make it work. Finally there is the pièce de résistance, Sorin, Lord of Innistrad. The only Planeswalker so far revealed for Dark Ascension, and likely the only one we’ll see, this guy generates 1/1 Lifelink Vampire tokens as his +1 ability. At -2 Loyalty he gives all your creatures a permanent +1/+0 bonus, making all his Vampire minions Child of Nights! His ultimate, at -6, gives you permanent control of three creatures and/or Planeswalkers. That’s right. He can steal Planeswalkers.

So what’s your favorite preview from Dark Ascension so far? Have you sided with the Zombies, Vampires, or Werewolves or do you prefer to cast your lot with humanity? What kind of decks do you look forward to putting together with these awesome new reveals?

Now for some Q&A! Thanks to those who submitted questions last week, and please don’t hesitate to submit your own Rules and Gameplay questions in the forums below or via PM to encaen.

A: Pariah doesn’t change the source of the damage, instead it simply changes where the damage is going. Pestilence is still the source, hence Protection from Black is going to keep the White Knight alive.

A: Before Sharuum’s ‘enters the battlefield’ Triggered Ability is put on the Stack, State-Based Actions are checked and the Legends rule puts both Sharuums into their owner’s graveyard. The Triggered Ability is now put on the stack, and Sharuum is in the Graveyard, and therefore a legal target. Targeting Sharuum brings him back to the battlefield and his Triggered Ability procs bringing the other Sharuum back. This can, if desired, create an infinite loop of Sharuums, meaning that Where Ancients Tread can deal as much damage as is needed to kill the opponent!