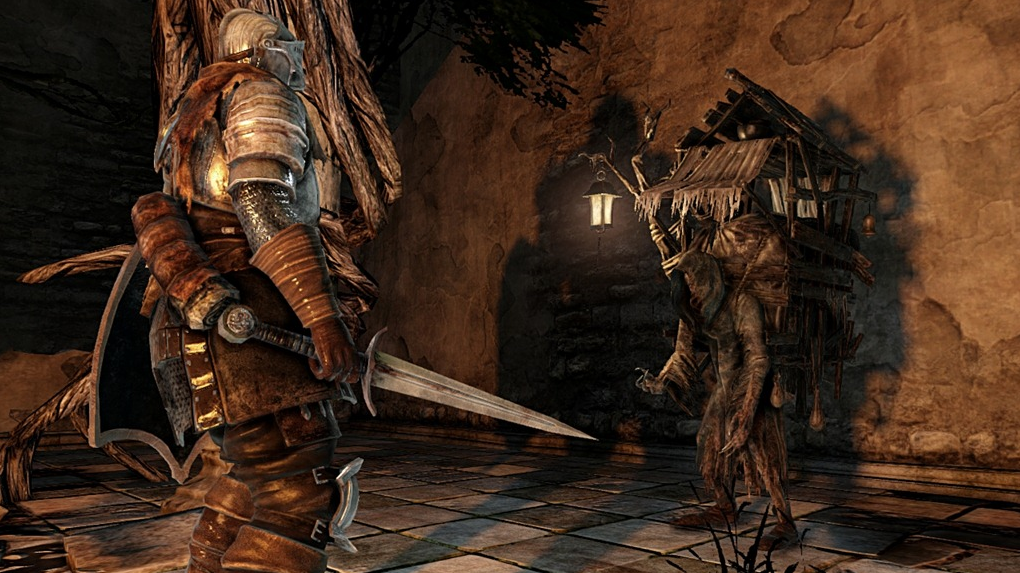 As I said in my Dark Souls 2 review, at the point when I wrote it I’d played about 30 hours, with three of the four big souls acquired and on my way to the fourth. I have now finished the whole game, it ended up at about 45-50 hours, and I have to admit, my opinions have updated a little bit, having gotten the full perspective of the experience as a whole.

For one thing, I’m surprised by the fact that, when monsters stopped spawning, I felt genuinely bad. If you’re not familiar with Dark Souls, all the monsters (except bosses) respawn whenever you die or rest at a bonfire. It’s like a reset button, and all you can do is throw yourself at a section again and again until you’re good enough to take them all on. But in Dark Souls 2, monsters stop respawning after you’ve killed them a certain number of times. I think it’s around 10 times. And first of all, one feels immediately patronized by that, or like the game has lost patience with you. “Are you still here? Christ, if I take some of these big meanies out of your path, will that help you shake a fucking leg?”

But apart from that, I’d actually feel guilty when I saw them disappear. Especially if (as was often the case) I’d been unable to recover my bloodstain the last time I died, and all the souls I had acquired from that monster’s previous incarnations were now lost, unused. I felt like a kindly and noble hunter-gatherer, who traps an animal for his dinner but then ruins it while cooking or lets it spoil. And then feels the guilt of a man who has taken life senselessly. The silence of the lonely halls as I made for the boss door for another attempt only exacerbated my despondence. 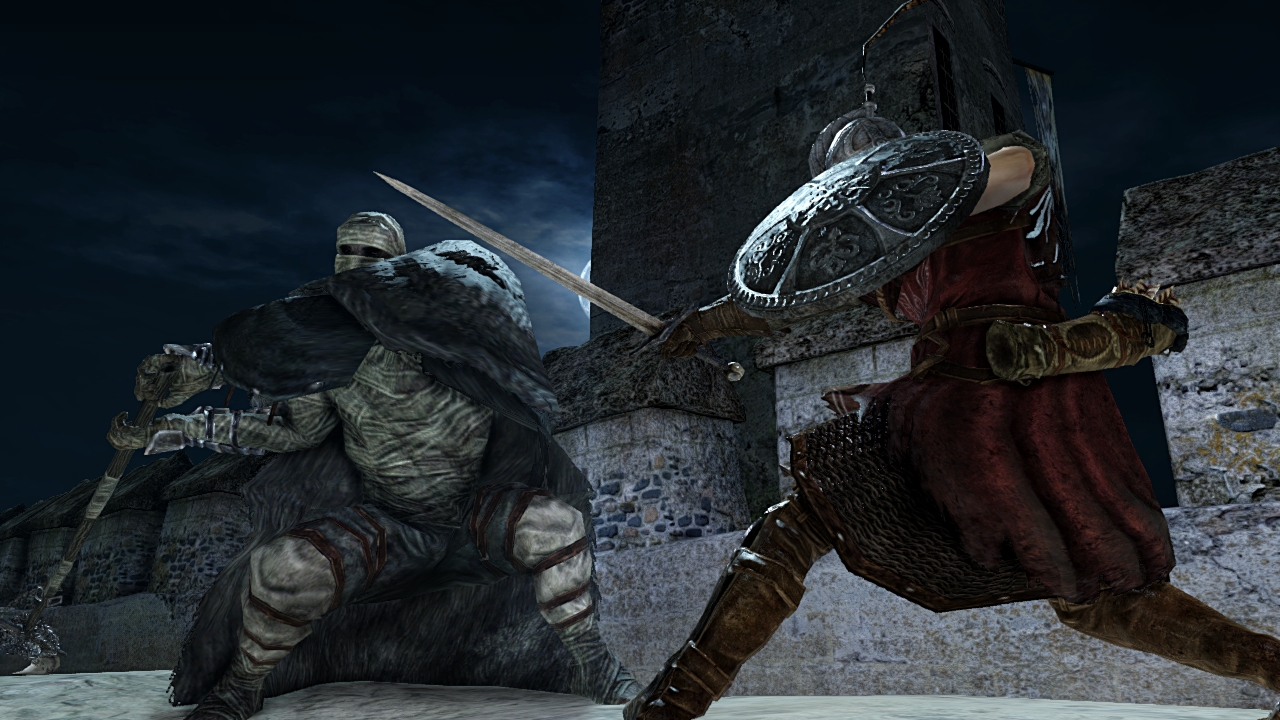 Overall, though, I find my opinion has generally worsened since I finished the game. I guess the big issue is that it’s a very sequel-y kind of sequel, if that makes sense. That should be obvious from the fact that it was called Dark Souls 2, when it was the third game after Demon’s Souls and Dark Souls. A less sequel-y game would have continued the trend and called itself something like Deadly Souls or David Soul. And would probably have been almost completely unconnected to the predecessor, like Dark Souls was to Demon’s Souls.

Y’see, Dark Souls was overtly implied to be taking place in the last days of the world. Dark Souls 2 taking place some time afterwards kind of undermines that whole thing. Maybe there was some kind of global collapse and enough time has now passed that things eventually got back on their feet – making Dark Souls 2 a sort of Renaissance to Dark Souls 1‘s Roman Empire – but that takes away from the grim hopelessness that’s kind of essential to the mood.

What illustrates this best is the comparison between the home bases in the two games – Firelink Shrine in the first game and Majula in the second. Other friendly characters would show up at Firelink and it gave the place a sort of community hub feel for the wandering Undead. Some would stay there permanently and offer various services. Others would come and go, cheerfully announcing that they were off to resume the adventure elsewhere. 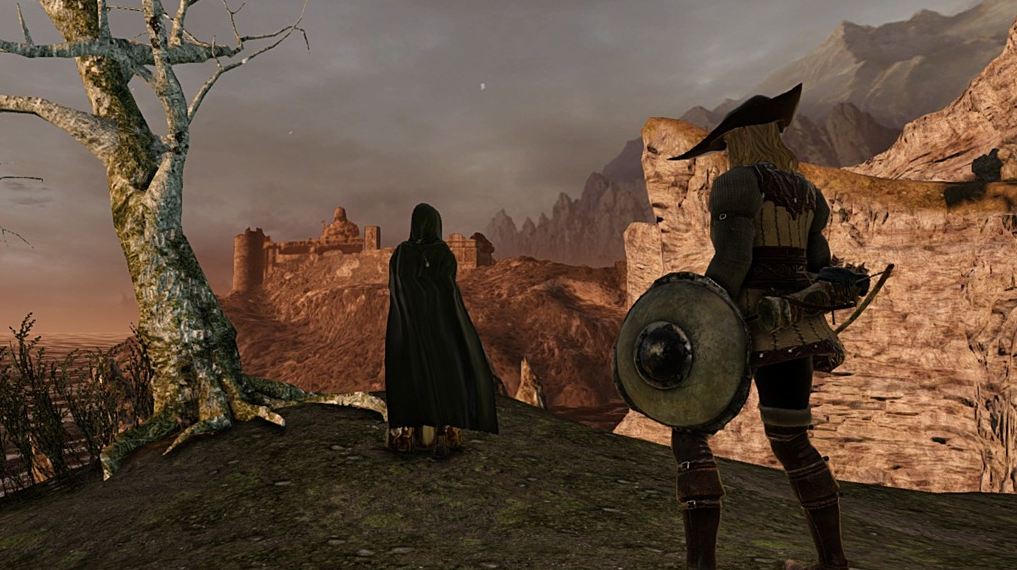 And virtually every single one of these characters you eventually find dead, or are killed by your hand when they turn Hollow. By the end of the game, you are just about the only Firelink regular still keeping the campfire warm, gloomily telling tales of your adventures to nobody. The jolly Siegmeyer lies dead in a poison pool far below, and noble Solaire has a case of the tunneling brainworms. It added to the deep sense of hopelessness that gave the game its atmosphere. Events are counting down to the end of the world, and that countdown seems to be taking the form of your list of remaining friends.

Meanwhile, Majula in Dark Souls 2 does things the other way around. It starts off fairly abandoned, but acquires merchants and random johnnies as you find them in the real world. By the very end, it’s fairly bustling. Things only started feeling lonely when a section I’d repeated too many times started despawning its monsters. I appreciate there’s no reason the game should have to pursue the same overtone of loneliness and despair as its predecessor, but once it takes that away, it doesn’t really have anything to replace it with. You finish the game, reappear back at Majula for post-ending fuckabouts mode, and it all tapers off with a whimper rather than a bang.

That’s the other thing I’m kicking myself for not noticing before reaching the end of the game – that the end of the game isn’t very good. It wasn’t massively amazing in DS1, either, the bosses all got kind of easy and the ending was a touch anti-climactic (either of them, really). But it seems like DS2 was determined to take that record and beat it, in both the easiness and anti-climax events.

The final boss in particular was almost an insult. It trudged about like a slug on a doorstep and it seemed like none of its melee attacks were able to connect with me as long as I stood right next to it. Its main thing was putting down things that inflicted the Curse effect. Now, in the first game, being Cursed was a really nasty effect you wanted very badly to avoid, but in DS2, all it does is knock a pixel or two off your maximum health. That all you got, bitch? ‘Cos I’ve got 20 Human Effigies left that will give all that health back. What’ve you got? An easily dodged melee attack and a few magic spells that telegraph like the arrival of the fucking Hindenburg.

And this may be one of those things I need to play the game a few more times to understand, but I felt pretty blindsided by the story by that point. I was laboring under the impression that I had come to the land of Drangleic to clear up my nasty case of Undead, and that the way to do that was to seek the king. But towards the end, there were a few witty conversations with people who seemed to be under the impression that I was there to REPLACE the king and take his throne, for no better reason than because that’s what you were ostensibly doing in the previous game (broadly speaking). Wait, what? Did we ever properly talk about this? I’m cool with not taking the throne, I’d just, you know, like to stop looking like someone crafted me from beef jerky and string.

So yeah, those are the updated opinions. Other than that, it’s still a perfectly fine and absorbing game that’s well worth an investment if you’re a fan of the original. Although that fast-ladder-climb does look fucking ridiculous.