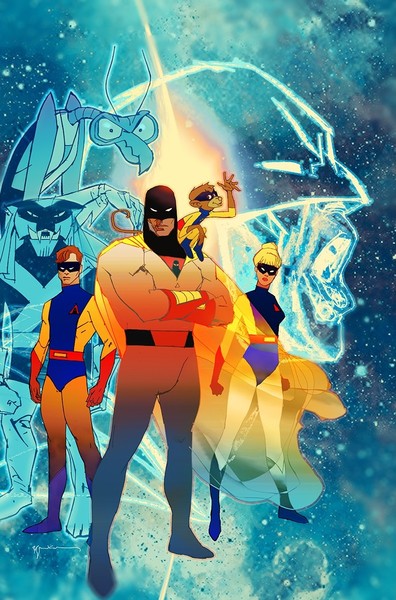 DC Entertainment is trying to put a new spin on old Hanna-Barbera cartoons for a new audience. And now they are unveiling new alternate covers for the comics debuting in May.

You remember the old Saturday morning cartoons, right? Scooby-Doo, Space Ghost, Jonny Quest, The Flintstones … yeah, those were great while eating your cereal in front of the TV. But as time marches on for that generation, some younger folks were never exposed to those Hanna-Barbera mainstays, and DC Entertainment wants to remedy that.

Coming in May, DC will be releasing new comics for Scooby-Doo and Jonny Quest / Space Ghost with Scooby Apocalypse and Future Quest. The standard covers for the comics have already been released, but DC has gone one better – er, two better – by releasing two variant covers for each comic. Two more for each will be released before the comics actually debut in May.

In case you missed the reveal back in January, Future Quest will feature stories by Jeff Parker (Batman ’66, Justice League United) with art by Evan “Doc” Shaner (Justice League: Darkseid War: Green Lantern). The two recently released variants include one by Steve Rude, offering a cool depiction of Jonny Quest and his pal Hadji, while Bill Sienkiewicz’s cover shows his rendition of Space Ghost, Jan, Jace and their mascot Blip, with enemies Brak and Zorak in the background. Future Quest is set to debut on May 18.

For Scooby Apocalypse, Scooby-Doo, Shaggy, Daphne, Velma and Fred are will be trying to solve a mystery of a nanite-infected world. Co-writers Keith Giffen (Sugar & Spike, Legends of Tomorrow anthology) and J.M. DeMatteis are handling the story, with art by Howard Porter (Superman), and the standard cover by Jim Lee. In the two variants, Howard Porter does Scooby-Doo (complete with Scooby Snack), while Neal Adams gives a new look to mystery hunter Fred Jones. Scooby Apocalypse is set to release on May 25.

“From a personal standpoint, I was always a fan of the old Hanna-Barbera characters, having grown up on them,” Dan DiDio, co-publisher of DC Entertainment, told Entertainment Weekly back in January. “I think what you find right now is there’s so much material on pop culture, and these characters resonate with so much of our fanbase. It was so fun to go out and look at them, but not just bring back versions that existed 40, 50 years ago and really look at it the way of saying, if these characters were created and interpreted today, how would they exist? So we handed off our materials to a number of top creators, and what came back was an exciting look that felt very true to the existence of the characters.”

DC is also looking at bringing a more mature twist to The Flintstones and Wacky Raceland as well.

“We didn’t want to just repeat what people saw in the past,” adds DiDio. “It’s really important for this to resonate with folks who have never even heard of the characters. If this is the first they’re seeing it, we want them to be enjoying the material. So from our standpoint, our goal is to make this exciting and accessible to all generations, whether they’re fans of the material and the characters or not.”