Almost every PC gamer owns at least one game on Steam. Some own hundreds, and others thousands. It’s easily the most popular storefront around. But despite its popularity, Steam has some issues, and 2017 is the year we’d like to see Valve address them. 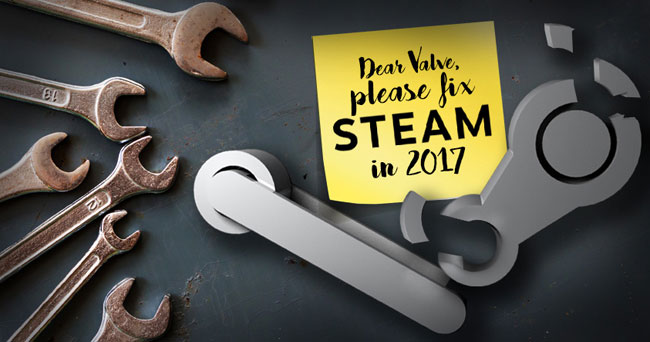 Steam has become a vital part of the PC gaming universe the past few years. The majority of PC gamers own multiple Steam games, as is evidenced by Steam’s $3.5 billion in revenues from paid games in 2016 (according to the SteamSpy annual report, which excludes DLC and free-to-play revenues). But that same report showed that while the total number of games on the service had grown dramatically, with over 4,200 new games being released last year, Steam’s revenues stayed just about the same as in 2015. How can that be, with such a huge explosion the number of games available for purchase? Well, the answer lies, at least in part, in the things that Valve needs to fix about Steam in 2017.

One of the biggest challenges Steam is facing, especially in the face of such explosive growth, is discoverability. With so many games on Steam, it’s become almost impossible for games to get noticed organically within the store. While Valve has taken steps to try and alleviate this, they’ve been only marginally effective. Finding a new game to play that you don’t already know the name of is more than a crap shoot these days – it’s reaching into the lottery bin and hoping to draw your number on the first try.

So far, Valve has implemented things like tagging, discovery queues, and a curators system in its previous attempts to address the discoverability issue. Back in September, it released an update to the way that new titles appear on the store, and revamping how its home page displays games. These are solid first steps, but Valve needs to do more, and that may involve giving much more control to its users. The Steam Store has already begin showing you games based on what you play and buy, but what if you could pick developers, genres and more that populate your front page, and still had a dedicated section devoted to showing you similar games.

Another issue that plagues discovery is Steam reviews. The system is better than it has been in the past, but it still harbors some inexplicable idiosyncrasies. For instance, any review that was written by someone who activated a Steam key, rather than purchasing the game through Steam, no longer counts toward the game’s total review score. While at first glance that sounds good, as it would keep a company from exchanging keys for good reviews to game the system, it also locks out a swath of legitimate customers from using the system. Kickstarter backers, those who buy from other sites like GreenManGaming, bundle purchasers, and retail purchasers all get hosed by this system.

It also punishes indies to a larger extent than larger companies, as they are more likely to have large numbers of fans who backed on crowdfunding sites, or acquired the game through a bundle. This can also lead to the bizarre situation where you can look at a game’s Steam page and see more positive reviews than the count shows. I’ve also had indie devs tell me that negative reviews that were removed, either by the author or by Steam, still count as a negative review on their total. Steam has had an eye on reforming the reviews system in recent updates, but it needs quite a bit more thought. The effect that reviews have on discoverability is unclear (and Valve should clear this up by explaining just how the review ranking system works), but the effect they have user perception is not. One indie dev related a story in which his game was selling 20-50 copies an hour when a user dropped its rating from “Positive” to “Mixed.” Sales dried up almost instantly, with no copies being sold until the rating went back up.

Suffice to say, fixing discoverability is a daunting task, and to fix it Valve may end up having to address another problem: what’s in its store.

Where’d all these games come from?

According to the pie chart below (originally posted to Twitter by SteamSpy), 4,207 games were released on Steam in 2016. That’s roughly 38 percent of all the games on Steam, and is a drastic increase from the 2,964 games released in 2015, and the 1,772 games added to the service in 2014. Now at first glance, that doesn’t seem like a bad thing. After all, isn’t more games always a plus? 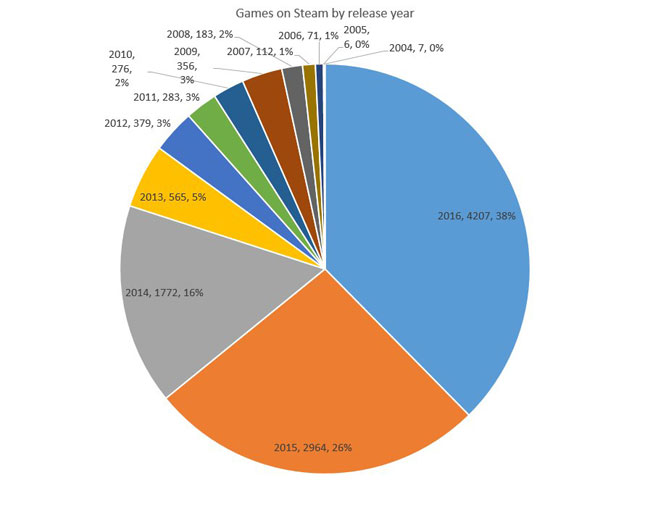 Not necessarily. We’ve all seen the stories of games like those put forth by Digital Homicide, or the Unity-store asset flips masquerading as actual games. These are a consequence of Valve loosening the restrictions for adding a game to the service, which was done in response to complaints that getting games on Steam was too difficult. As you might recall, not so long ago it was a royal pain-in-the-ass to get your game on Steam. For many indie developers, it was a nigh-impossible task. I’ve spoken with indies who told me that people would walk up to their PAX booths with money in hand, only to change their minds once they heard “It’s not on Steam.”

The sort of market power that Steam has in the PC gaming world should also bring with it some responsibility, and the big thing Valve needs to work on this year is curating Steam content. Obviously, when you’re adding over 4,000 games a year, you can’t play every one. But you can give it a cursory inspection to make sure it’s viable, legal, and not something that is a waste of time for all involved. Will it cost Valve a little cash to hire people to do this? Yes. But it would improve the quality of their store immeasurably.

Why does the Steam sale suck now?

About four times a year (Spring, Summer, Autumn, and Winter), PC gamers gear up for a Steam sale. Wallets are laid bare, savings are exhausted, and many new games are purchased. But in recent sales, the excitement seems to have faded. That’s because Valve, who had excelled in the past at making things fun, has allowed the Steam sale to become boring. The deals never change,
there’s no exciting tie-in event, and it’s only worth showing up on day one.

Valve needs to bring back that excitement. It doesn’t have to be through Flash Sales or other 90 percent-off devices, but it needs something to make people look forward to seeing the Steam sale begin again. The same old discounts, trading cards, and voting for meaningless awards aren’t getting it done. This also ties back to the previous two issues, in that it’s hard to find a deal on the game you don’t know about yet if you can’t find it in the deluge of games on the service.

So, what should Valve do about it?

In my opinion, Valve has three major tasks this year, as it relates to Steam. First, they need to continue their initiatives to improve discovery, with a major eye on giving gamers more control over what is being presented to them. Second, they need to greatly expand their efforts at curating the content that’s coming onto Steam. Finally, they need to make their sales and events attractive to users again. While some may argue that Steam is the dominant force in PC gaming and therefore doesn’t have to make changes, I’d say that it needs to up its game despite the current lack of competitors. None of these are easy tasks, but Valve has the resources to accomplish all of them, especially seeing as they probably aren’t working on Half-Life 3.