The fact that there’s no way to die in Kirby’s Epic Yarn sparks the old debate in my mind as to whether or not dying needs to be a mandatory risk in every game (save Cooking Mama, I guess, but one could argue that the look in her eyes when you fail to stir the pot on time implies your impending murder).

There have been several games that have made the connection that, what with players frequently quicksaving and autosaving, death will usually mean nothing worse than using up a few minutes of your time as you’re backtracked to a little way before your mistake. So some developers have tried to find alternatives. Prey is one example, where instead of dying you’d be teleported to a mysterious astral realm where you had to shoot bat-like things to get your health and energy back. And then there was Prince of Persia ’08, in which you’d be rescued by your nanny an instant before your death. Both these techniques were almost universally derided, by which I mean derided by me.

But why? If the only penalty for failure is a loss of time, why should either of the above methods be considered inferior to the classic death and quickload? Why do people complain about a game being unchallenging because you never die, even when virtually every game in the world supports the bull-headed trial and error response that does nothing but briefly delay you when you die, and being physically unable to continue in a game in this day and age is the exception rather than the rule?

It can’t possibly be a gameplay issue, then, because the failure models are functionally identical, really. Time loss, that’s about it. It’s got to be something about the way it’s presented, about the player’s sense of being under threat. I’ve come up with a theory to explain why gamers are rarely welcoming of alternatives to death.

First, let’s deconstruct an average death. Let’s take Call of Duty for a random example. Your avatar is running about on the battlefield trying to remember which button is for “crouch” when he fails to heed the warning given by the strawberry jam smeared on his spectacles and is fatally shot. He crumples to the ground, one arm cast limply over his head. As his vision fades and he recalls all the bad decisions that brought him to this spot, his last sight on this Earth is the enemy stronghold he was supposed to raid, its sheer distance taunting him with his failure. Then black out. Then the loading screen comes up and we pop back to what was going on five minutes ago.

Now, imagine if instead of that, when he falls to the ground, Private Protagonist’s belt-mounted patented Death-Away device kicks in and he’s jolted back onto his feet by a burst of pixie dust, needing only to run and catch up with his buddies with a slight kick to his pixie dust ration. How is this worse? Because it’s all taking place within one timeline.

When we restore the game, the knowledge that we’ve had to step back a moment in time to correct a mistake is what’s crucial to our minds, consciously or unconsciously. In terms of the many-worlds interpretation of quantum mechanics, we are stepping into a different universe where events can occur slightly differently. That death we suffered still stands back in the old timeline. In that universe, the goodies will fail, a superior officer brings tearful news of your death to your parents in what little time remains before the bad guys’ doomsday weapon detonates. We, the player, opportunistically hopping into the body of our player character’s quantum clone, are the only ones who remember the old timeline, but it will still exist somewhere, and that will weigh heavy on our minds for eternity. When we finally beat the game, we are playing as the one Gordon Freeman or Sam Fisher or Lara Croft that got enough lucky breaks to see things to the end, while the multiverse at large is riddled with the corpses of our failures. 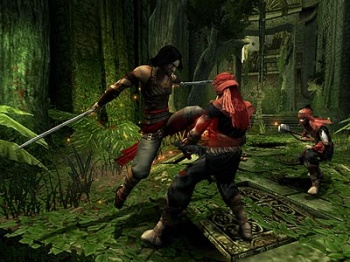 This also explains why the time-rewinding mechanic in the Prince of Persia games isn’t said to make those games unchallenging. Essentially it’s the same as death-restore, a step back to before a mistake was made. The only difference is that the player character gets to come along for the ride, not just the player. The future mistake still exists within its own timeline. This is even played with in the dialogue of the first game: after rewinding, occasionally your sidekick complains about suffering from déjà vu.

But when recovering from death occurs within the same timeline, it does feel like less of a challenge and raises several vast issues within the story. What possible hope do the villains have if the heroes are functionally and demonstrably immortal? In a standard death-restore system the villains lose because the heroes have quantum immortality and are just getting a lot of lucky breaks that couldn’t possibly be anticipated, but if the heroes have the secret of eternal life, you’d think more enemy soldiers would get demoralized and surrender. You’d think the villains would stop wasting their bullets and concentrate their efforts on perhaps capturing one of you and reverse-engineering your technology. Or at the very least offer to suck you off if you let them go.

There was a rather poorly-received movie a few years back called Next in which Nicholas Cage played a character who could predict the future. Just roll with it. Whatever the film’s merits, there’s a rather striking sequence that sticks out in my mind in which Cage needs to search a large building in a short time, and so uses his powers to essentially save scum. This is represented by showing him split into two Nicholas Cages every time he reaches a fork, until an entire army of Nicholas Cages are wandering through the halls until one of them finds whatever they’re looking for and so becomes the “true” version of Nicholas Cage. Quite a complex visual metaphor for Hollywood standards, and probably the best representation of video game death mechanics I’ve ever seen in film.

It made me wonder if there isn’t room to play around with the quantum mechanics approach to death and reloading. I had an idea for a game in which the main character is a clairvoyant trying to prevent some kind of disaster. It’d be controlled Hitman: Blood Money style and you’d have some kind of astral projection mechanic to let you map out the area and your objectives, but whenever you died it would cut to the player character back before the mission, clutching his temple and looking concerned, thus revealing that you weren’t actually playing the real world, but a prediction of a possible future that could now hopefully be avoided.

Or perhaps I’m overthinking all this. No, I guess you’re right, Nintendo, the best approach is to replace dying with making all my pocket change fly across the room.