I have no life. That should be fairly obvious from, well, everything, but despite the fact that I am literally writing this with an attractive young lady who isn’t wearing a bra clinging to my leg, I still have no life.

In videogames, that is! These days, a player character in a video game exists in a state of immortality, never dying, and ergo, never truly living. You die, you just come back to life, and when death carries no sting, we can’t be said to appreciate the life we have.

That’s why I have a grudging respect for the kind of retro games that would force you to start all the way from the beginning if you lost all your lives. Because at least that is overtly making the game into some kind of endurance challenge. You might eventually become so familiar with the first level of the game that you can get through it while knitting with your other hand, but what else were you going to do, junior, get your mum to buy you another game? Suck it up. Treasure Island Dizzy only gave you one life and you died when you touched practically anything that wasn’t a tuft of grass, and that was not a short game, but I still had a smile on my face as I played it. Well. A rictus grin, anyway.

A game that just infinitely returns you to life is valid because it keeps the flow going and maybe telling your interactive story is more important to you than making your players induce physical injury upon themselves. A game with a traditional lives system is valid because you’re focusing on creating an actual gameplay challenge, the victory for which will taste all the sweeter. But what I have absolutely no respect for is the wishy-washy in-betweeny approach that games with lives systems have these days.

For some reason it only seems to be Mario and Sonic that still does this. Maybe those two properties feel hamstrung by the need to call back to their nostalgic roots all the time, since nostalgia is the entire foundation of their mutual empires. I mean, what else are they going to use to carry their games, innovation? Actually being fun? Pff. Anyway, games like Super Mario 3D Land, New Super Mario Bros Wii, Sonic Generations, et cetera, generally all use the same basic system where you have a lives counter and if they run out then you just have to go back to the map screen and start the level again, without being able to return to a mid-level checkpoint. And that’s it. That is your punishment for squandering the precious nuggets of existence some clandestine deity granted you.

I can predict an obvious counterargument. “Doesn’t bother me! You never have to go back very far anyway! Let them have their harmless fun evoking the older days of gaming!” Which I might have said myself at one point, but playing 3D Land alongside Rayman Origins illustrated the significant problems with the system. For one, it’s very harmful to the game’s flow. Rayman never got frustrating even on those incredibly hard chase levels that require multiple trial and error attempts to get through, partly because the music is actually quite a joy to listen to, but mostly because the game doesn’t dwell on your deaths, there’s just a little plop, a quick fade to and from black and your next attempt begins. Super Meat Boy does this very well, too. 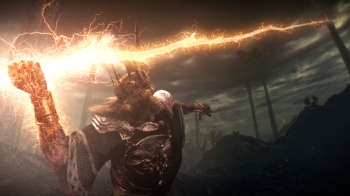 Contrariwise, after a while of playing Mario 3D Land I was growing to loathe it more and more, and Mario’s heavily exaggerated whoops of suffering as he plummets to an unclear fate started to seem like they were deliberately trying to get on my nerves. It’s not dying repeatedly in itself that’s frustrating. As I’ve said in previous columns, sudden repeated death is actually funny in a kind of self-effacing way, and more likely to drive someone to keep trying. Frustration, the kind of frustration that might cause someone to get genuinely cross and dislike the game, comes from what happens after the failure state. Frustration grows exponentially for every second or dialogue box that passes between the player character’s death and putting them back in the action, and even something as initially innocuous as “Try Again” starts to feel sarcastic and patronizing the darker one’s mood gets.

A more general game design rule would be that the player’s frustration grows exponentially for each second you take away their controls in a situation they’ve already been in countless times. That’s why those Rayman chase levels only have the introductory cutscene thing on your first attempt. So throwing in a “GAME OVER” sequence after an arbitrary number of attempts will only provoke additional fury in an already disheartening situation, and there really is no need for it. The only possible justification for a lives system I can think of is that you can have Extra Life pickups to reward the player for exploration and achievement. And that’s flimsy at best. You know what else you could reward us with? Nudie pics. That was the one thing Splatterhouse did right.

Anyway, another game I played lately was Dark Souls, which a lot of people tried to talk me into reviewing and who will now go away disappointed. Not because I’m being deliberately obstinate for once; for some reason I can’t get the online component to work, possibly because of connection issues, and apparently that’s a big part of it and any attempt to critique the rest of it would be unfair. With that said, I found Dark Souls to be an immensely irritating game in which I would have to play the same section over and over and over again – because the slightest mistake while fighting any single enemy could leave me dead in two hits – only to find that I was supposed to be going another way all along. So basically not much different to my experience with Demon’s Souls, its predecessor. If you’re going for the infinite lives constant flow approach to game design discussed above, Dark Souls is a rather neat reminder that it helps if your game actually does flow at all.

But I kept playing for a while, mindful of the exact wording of the recommendation and of the responses to my Demon’s Souls review, that the game gets good if you play it a certain amount of time and get into it. An argument I’m always suspicious of because I see myself going back to the person every few hours and them saying “No no no, you were so close to the bit where it gets good, just keep going,” until you start to think that maybe you and he liking different things in a game might be an easier explanation than a game whose creators all had some kind of biblical epiphany midway through development.

But then something odd happened. I stopped caring. I’d been ploughing away at a section of battlements with a minotaur boss at the end, getting reliably pounded into salt by the boss over and over again, getting frustrated and hasty and getting killed by minor mobs on the way to the boss, ensuring I’d never get my accumulated XP back. And I was all very pissed off, but I pushed myself to keep playing, and something seemed to snap inside my head. I felt a strange emotional numbness pass over me, all anger disappeared and I found I could play the game as long as I needed, accepting each death with a phlegmatic stoicism. My god, I thought. I’ve been broken. This must be how people who play Modern Warfare multiplayer feel all the time. Can’t say I’ll want to spend more time in this strange mindset, but at least I know what to do next time I need to work temporary office jobs.