Developed and published by SMG Studio. Released March 14, 2017. Available on PC(reviewed), PS4, and Xbox One. Review copy provided by publisher.

I played Death Squared at PAX 2016, where I played a few 2-player levels, as well as a handful of 4-player mayhem matches. It’s a remarkably simple puzzle game with some remarkably devious puzzles. The gist is that players are performing a series of tests for a GLaD0S-esque AI test administrator, with additional narrative exposition by a male human, another Portal-inspired aspect. Players aren’t humans in this game, rather they’re just colorful cubes, so the test administrator’s indifference to repeated deaths doesn’t have the same morbidity. It’s cute here, rather than a bit haunting with Portal. 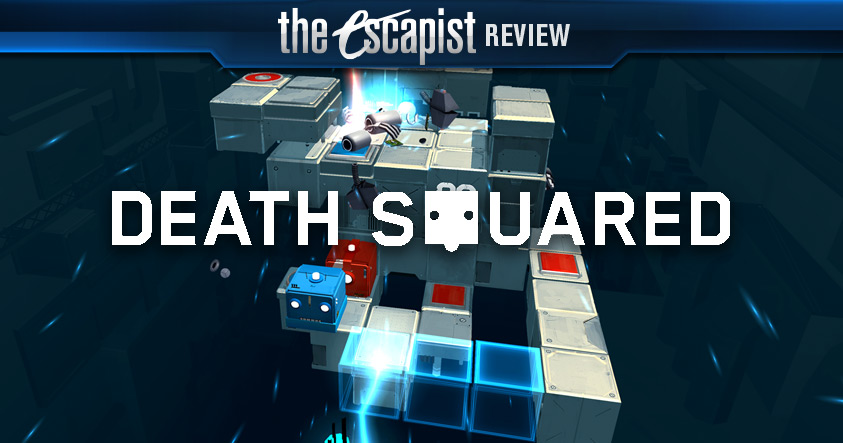 For two-player Story Mode, the narrative setup is where the Portal parallels end. The puzzles themselves are made up of stacks of cubes, and flat square platforms, with buttons, hazards, and goal markers. Your objective is to get the Red and Blue cubes to the Red and Blue goal markers, respectively. Translucent cubes in the level are only solid to the opposite color player, so a Blue player stepping onto a blue translucent cube will fall right through, while it will act as a bridge for the Red player. The buttons and goal posts in each level will usually trigger some mechanism within the puzzle. Spikes might appear from the floor, or blocks might move around, possibly knocking a player right off the map. Dying is part and parcel to the experience, but don’t let the griefer in your playgroup (We all have one.) join in the fun. That will end in violence.

I didn’t get as much time in with 4-player mode as I would have liked, as I sunk the majority of my time with the game into the 2-player Story Mode, either with a co-op buddy, or in the Lonely Co-op Setup, where one player controls both cubes. Aside from the difficulty many of us have with ambidexterity, playing solo is quite a bit easier than trying to coordinate with a friend. Sometimes, having the second brain to work out the puzzle is helpful, of course, but getting two people to synchronize their movements is a bit more difficult than just syncing up with yourself. It’s not nearly as fun, though, and it goes against the spirit of the game. But, alas, it’s local-only, and most of my gaming friends are from the internet. I do expect to have a lot of fun when the less-gaming-inclined family comes to visit, and we’re looking for something with an easy learning curve.

The puzzles themselves can range from unmistakably obvious to brain-addling confusing. Solving the puzzles in my head proved futile for the more challenging fare, so I ended up using an iterative, guess-and-check approach for some of those. Even when you do figure it out, getting the timing and coordination right, even by yourself, will take a couple more tries, at least. The puzzles can take anywhere from 30 seconds to several minutes, depending on how good you are at solving them, and then how good you are at executing the solutions. It’s usually a good idea to take a break when your partner steps on the button and kills you with spikes for the seventh consecutive time, however. That, too, will end in violence.

With dozens of puzzles in the Story Mode, and about half as many for 4-player co-op mode, Death Squared is going to offer at least eight hours of head-scratching puzzle play, but you might get six, or possibly fewer, hours, if you don’t have a full 4-player group available to you. At a price point of just $19.99, though, it’s a bit more expensive than a lot of indie titles, but it has a significant dollar-per-hour value, by comparison to many indie and AAA, alike.

Bottom Line: The local-only co-op nature, alongside the 4-or-nothing party mode will make it a bit tricky for many gamers to experience the whole game. It will be easier to recruit players, however, because of the sheer simplicity of the game’s premise.

Recommendation: Puzzle fanatics will enjoy it, even in solo mode. Players looking for some widely-appealing games to play with non-gamer family and friends will definitely find value here, and may discover they’re no longer the best player in the room.