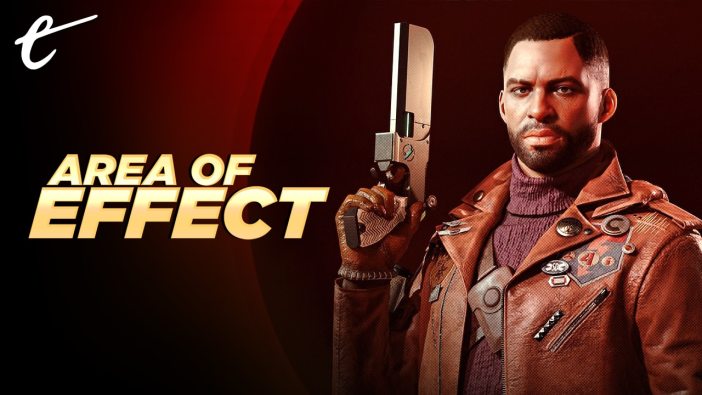 Would Twelve Minutes be any better if it took a leaf out of the Deathloop book and let you kick Willem Dafoe through a window? Maybe, but what I do know for certain is that protagonist Colt’s boot is one of the best things about Arkane Lyon’s time-bending shooter.

If you’ve yet to dive into Deathloop, which given the current glut of great titles is understandable, I’ll enlighten you. Aside from the usual range of FPS weapons and some quite esoteric variants, you have a “kick” button that does exactly what it says on the tin. The recipient of this attack will be launched a significant distance, sometimes to their doom.

It looks as daft as it sounds, but it’s so, so satisfying. I’ve become so fixated on Colt’s big boot attack that I end up using it when I know it’s not a good idea. I’ve spent a disproportionate amount of time invading other people’s games as Julianna, Colt’s nemesis, but I can’t recall every detail of Deathloop’s island topography. So when I see an NPC standing in front of a low wall, I don’t know whether they’re in front of a sheer drop or if there’s a measly half-meter drop below them. I am going to kick them regardless.

Of course, I could just snap their neck like a twig or bypass them entirely instead. Is it worth the risk of getting caught just for some fatal footwork? Absolutely. Ten seconds later I’m fleeing as every enemy in the area descends on me, with a massive grin on my face and absolutely zero regrets.

As director Dinga Bakaba explained, the kick doesn’t dominate combat in Deathloop, but its “fuck defense” origins only bolster its appeal. In fact, part of that appeal is that you’re eschewing conventional weaponry in its favor, a blend of defiance and arrogance. Yes, you’re toting a gun that can transform into another gun, but who needs that when you’ve got a well-worn pair of combat boots? And while your enemies don’t get long to think about it (multiplayer matches aside), you get the warm fuzzy glow of knowing how humiliating their respective deaths were; they didn’t even warrant a bullet. 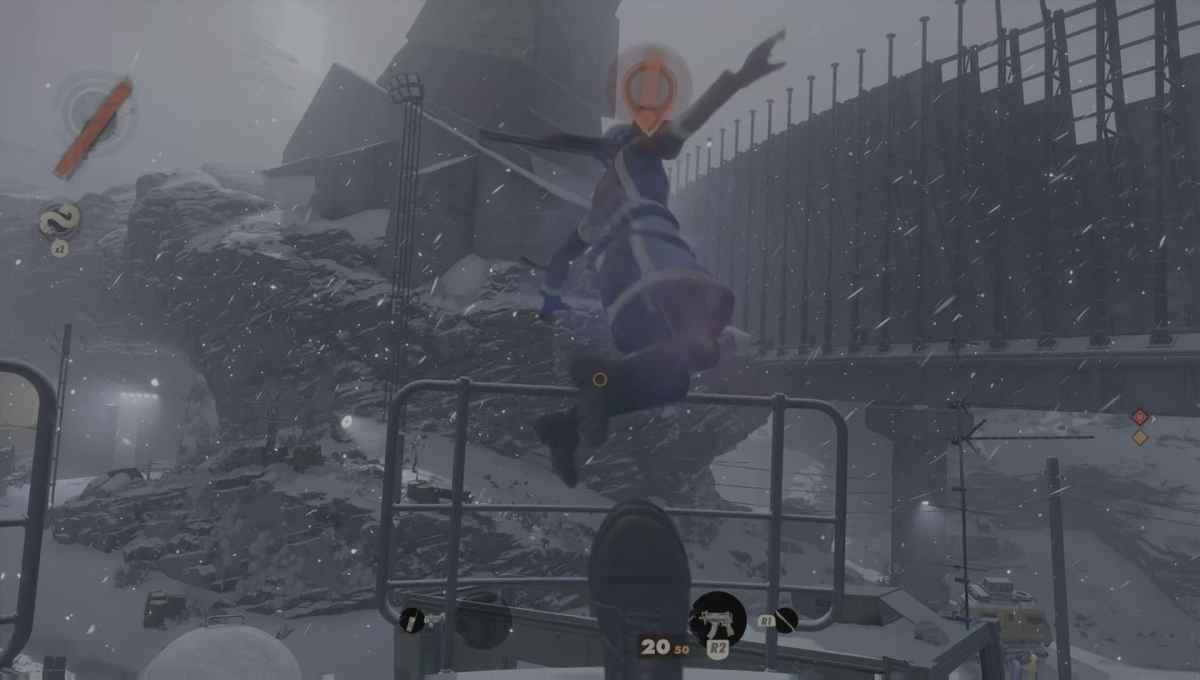 Then there’s the sheer physicality of kicking a foe, whether you’re sending them over a cliff or just doing some serious damage. There’s the crunch as your foot makes contact, the way they flail as they fly backwards, and, if you’re able to administer your boot to a group of unsuspecting foes, you get to see this pantomime repeat itself within the space of a few seconds.

The Hitman series may let you push people over railings, but with the exception of Hitman: Blood Money, the game is in charge; it decides when and where you can get your hands dirty. However, Deathloop’s Colt Kick ™ can be administered anywhere, at any time. Yes, it’s a mistake to get your boot out if you’re facing down six Uzi-wielding foes, but Deathloop lets you make that mistake.

In short, if you want to experience Deathloop at its finest, delivering some judiciously placed kicks is the way to go. However, if this is your first foray into enemy-kicking, you’ve missed out on a lot of fun. As memorable as Colt’s attack is, gaming has a history of giving enemies a boot to the head.

If you’re old enough to have played Duke Nukem 3D when it first came out, chances are you’ll have fond memories of the Mighty Foot, which, despite its grandiose name, was just Duke himself kicking enemies in the face. It was of limited use against heavily armed foes, but that didn’t stop me from trying. 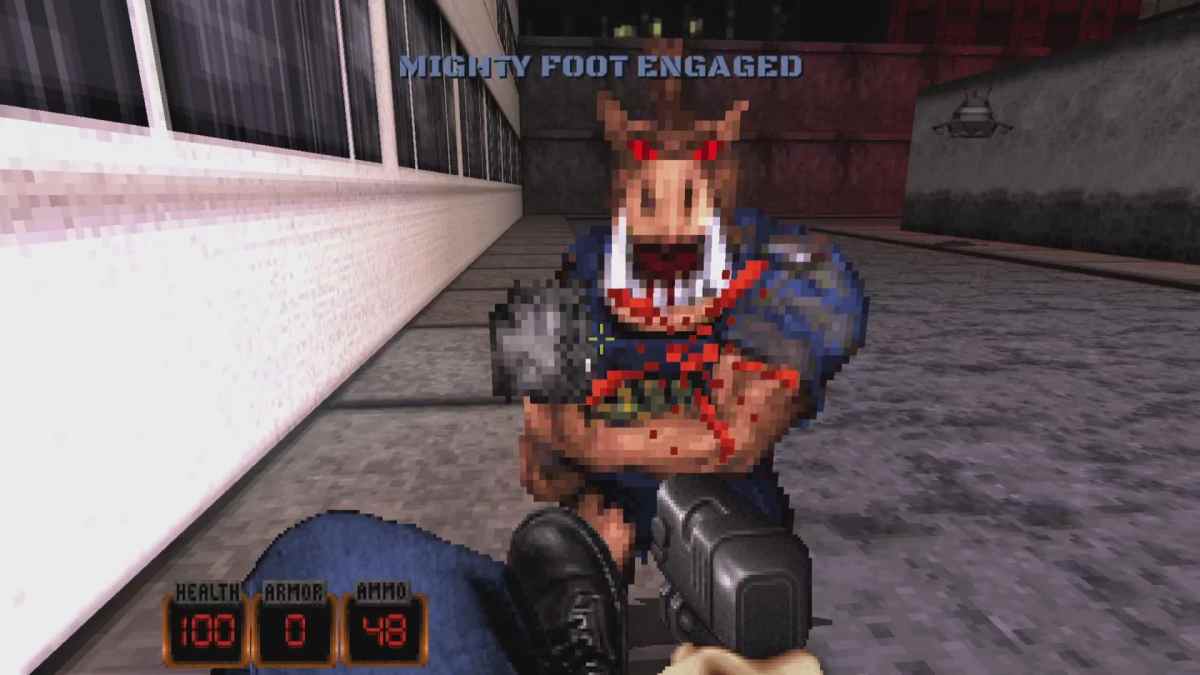 Dark Messiah of Might and Magic also made kicking a useful weapon, and while it’s not as pretty as Deathloop, having come out 15 years ago, it has the added bonus that booted enemies slam through wooden walls, shattering each plank as they go. Like Deathloop, this is a game where you’ve got a wealth of physical and magical weapons at your disposal, but that kick remains a thing of beauty.

This was before Zack Snyder’s 300 film adaptation was released, which introduced the Spartan kick/push kick to memedom. That said, 300 almost certainly had something to do with the inclusion of the aforementioned kick in Assassin’s Creed: Odyssey and, later, in Assassin’s Creed: Valhalla. You can bet that Assassin’s Creed: Infinite Barnsley or whatever the next AC title is will sport the same enemy-launching attack.

Sure, kicking your enemy into oblivion doesn’t stand up to examination. Deathloop takes some liberties with physics, and while my self-defense skills amount to running and hiding, I suspect someone trained in hand-to-hand combat could just grab the extended leg. But given that you’re dealing with low-level idiot cultists most of the time, I’ll let that last point slide.

Deathloop’s kick may not be the most powerful attack out there, but that’s not the point. It has the entertainment factor of Skyrim’s Fus Ro Dah with the bonus that it’s grounded enough that you can pretend you might be able to pull it off. So if you’re working on an FPS and looking for a weapon that won’t bore your players to tears, don’t be afraid to put the boot in.