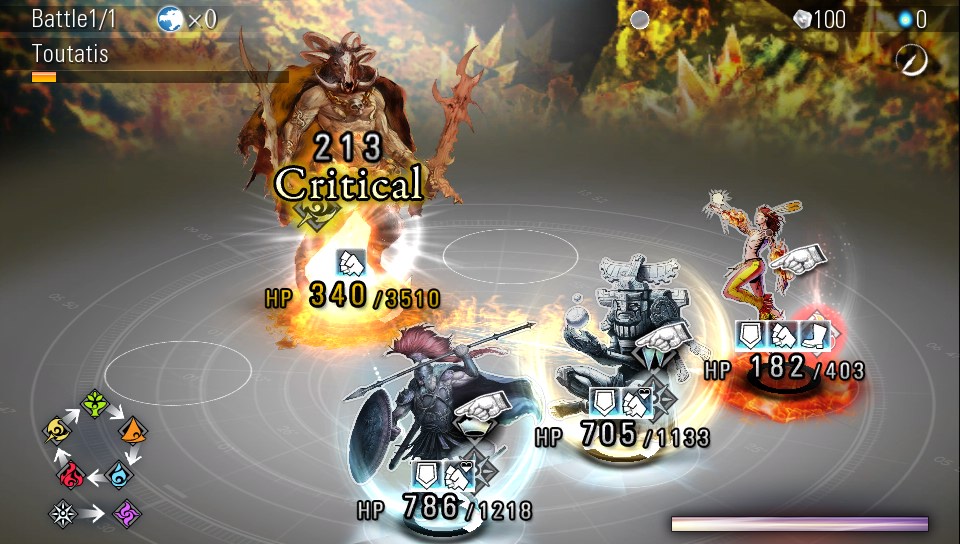 The freemium strategy game gives you a reason to take your Vita out for a walk.

Destiny of Spirits is one of the first freemium games I’ve ever heard of for the PlayStation Vita. Though the final price structure isn’t in place, it sounds as though it will be like many combat-based web and mobile games where players pay to speedup cool down times and access combat units before they’re unlocked.

I saw the game in Sony’s private press area at their E3 booth. Because the game is menu-driven and meant to be played in short increments per day, there wasn’t much to look at – but the producer walked me through the core gameplay loop.

The idea behind the game is destiny – which here means a daily fortune forecast. The game asks players to input their birthday and – based on this information – a fortune and an element is provided to the player every 24 hours. The fortune might be good (e.g. “You will have good fortune today.”) and the element is, say, Earth. Players then take their Vita with them wherever they happen to be going in real life – to school, to work, etc. Using geo-location, the game determines how far you’ve traveled, which in turn translates into the number of spirits you “discovered” while out and about. Your fortune determines how many spirits you’re likely to find and your element governs what spirit type you find most often.

Players officially obtain these found spirits in “Hunt” mode from the main menu. New spirits found by moving about are added to the player’s army. Players can also trade with others worldwide – which is a good strategy if you keep drawing bad fortunes or only one or two types of element over and over again.

Spirits in the army can be organized into parties that can be sent into battle against “evil” spirits (but not against other players). The elements determine what attacks and powers the spirits have — and the elements figure into a rock-paper-scissors hierarchy of strengths and weaknesses (wood is weak to fire, fire is weak to water, etc.). The seven elements are earth, air, fire, water, wood, dark, and light. To balance out elements, players can “rent” units from other players – which costs an in-game currency called points. The benefit in renting out your units, however, is that your units earn points for you if the renter wins their battle.

Battle itself is turn-based and involves very little activity on the part of the player once the party has been selected. Little figurines of the spirits appear on a battlefield and appear to slide toward each other one at a time while “attacking.” The spirits will attack as the default action no matter what the player does, but a power gauge fills up throughout the duration of the battle — and once it’s full, the player can press a button to activate a special attack.

Damaged units require a cooldown period to heal between battles, but if the player is impatient, they can always Hunt for more spirits or potentially speed up the cooldown with microtransations. It’s not clear if units rented out are no longer available to the player.

All in all, Destiny of Spirits is a lightweight strategy RPG that gives you something to do if you’ve got five spare minutes and you happened to be carrying your PSVita out and about. It actually seems like the kind of game that’d be better off on smartphones or tablets – particularly since it’s not a very demanding game in terms of graphics. Look for it before the end of 2013.