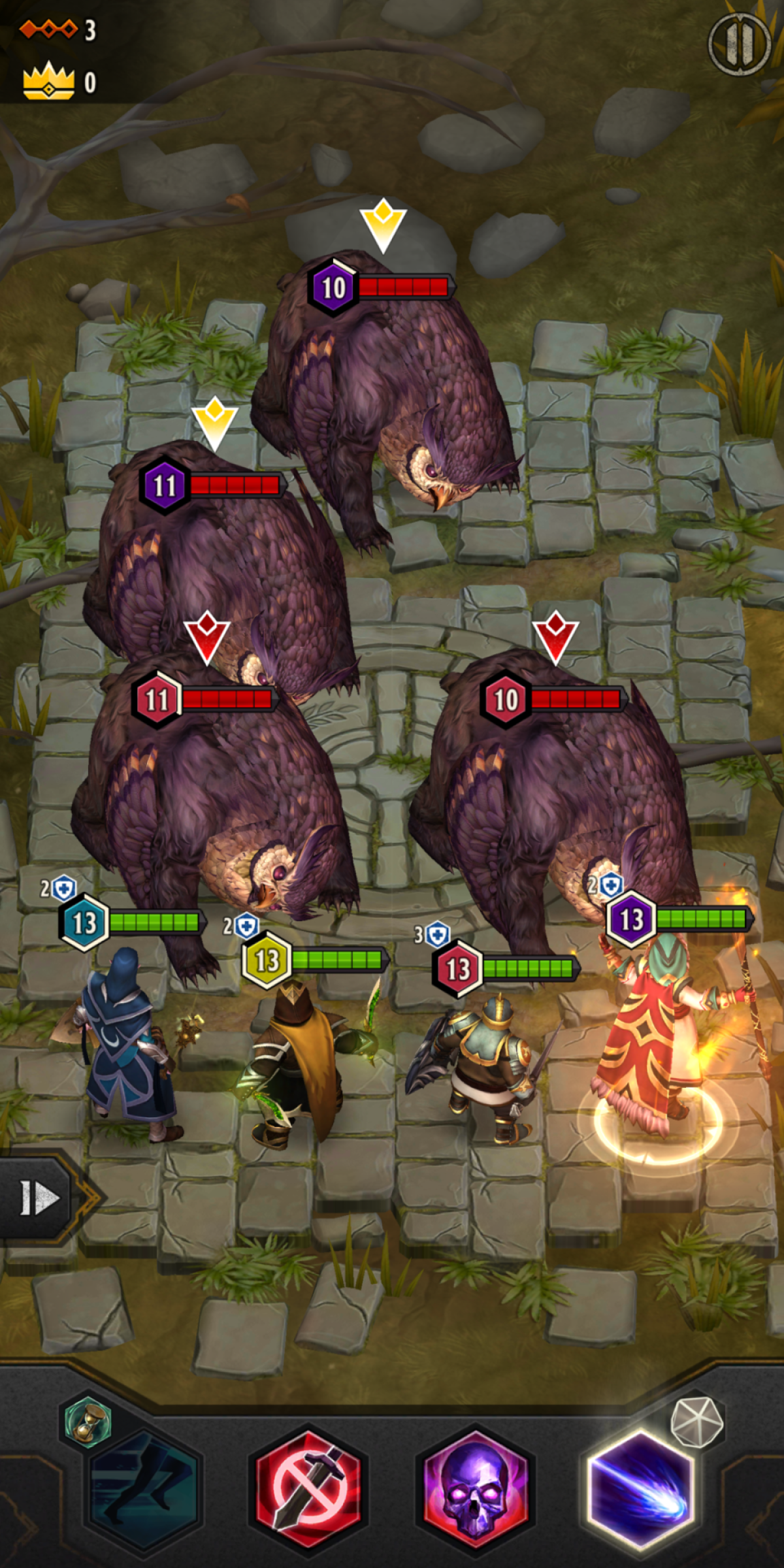 Developing Warriors of Waterdeep, an official Dungeons & Dragons mobile game, at Ludia boiled down to answering one simple question: How many owlbears is too many owlbears?

That’s not actually a simple question. It’s not even one question. First of all, what does it even mean? How many owlbears can virtually fit on a mobile phone screen? What kind of phone? Portrait or landscape? Do the owlbears show up all at once, or one at a time? Where are they – in a forest? Can we design a cool forest environment? Can you hear the owlbear screeches and see their feathers? Who are they fighting? What are their damage dice? Did the Dungeon Master give the players any clues, or was it all an ambush? What kind of heroes can stand up to owlbears? What’s the expected survival rate for halflings versus owlbears? What if they are very high-level halfling fighters, with support from clerics and wizards support?

The short answer to the question is… six.  The story of Warriors of Waterdeep is the story of how we answered that question for owlbears and then for kobolds, mind flayers, and dragons. 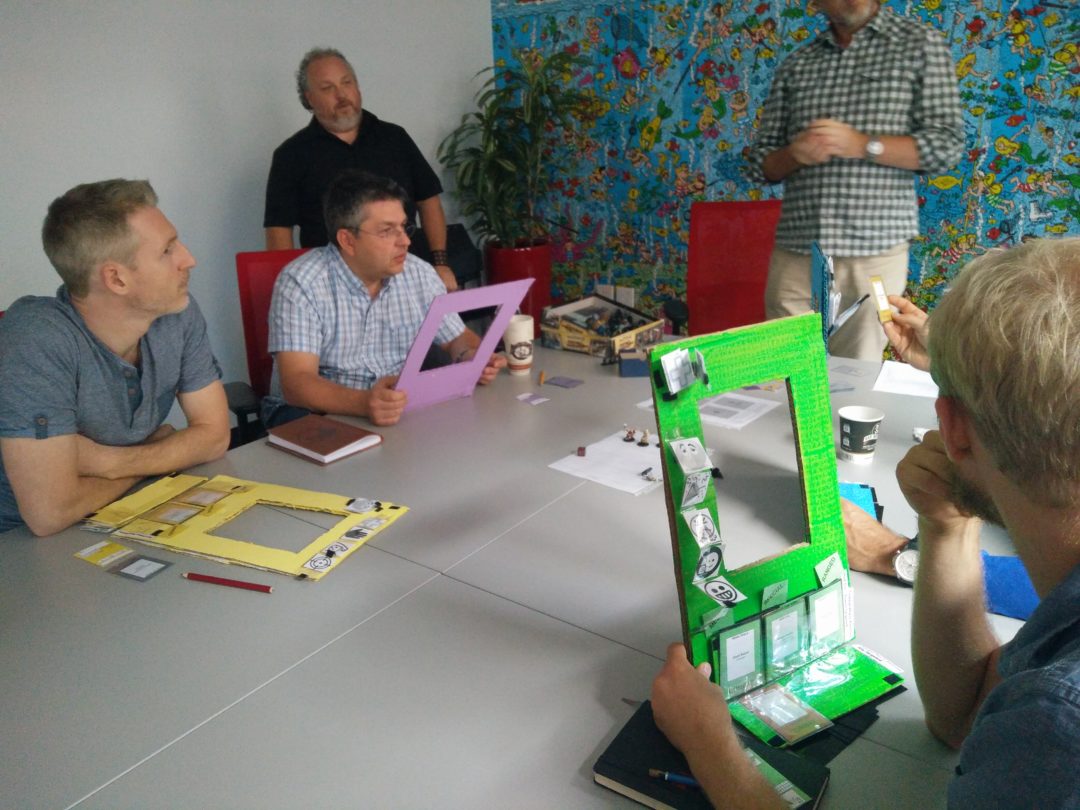 Warriors of Waterdeep didn’t start in a forest – it started at a conference room table. All the early games were played with pencil and paper. We used a series of paper prototypes – character sheets, random encounter decks, miniatures grabbed from 3rd Edition Basic Game boxed sets, and a lot of dice – to test basic game mechanics and find the fun.

The starting rules were simple: We’d have four basic heroes – fighter, cleric, wizard, and rogue – positioned at the bottom of a battle map with a random assortment of monsters arrayed before them. We’d roll initiative, choose attacks and targets, then roll attacks and damage. After clearing a room, we would choose between two decks to draw the next encounter, like picking a door to enter. Sometimes you’d find just a few owlbears. Other times, it would be a dragon.

There was a lot of room for rules experimentation and debate, like damage ranges, (Should a battle axe deal more average damage than a single owlbear bite?) initiative order (all owlbears, then heroes, or mix the order?), and even basic AI rules. (Should normal owlbears only attack randomly, and miniboss owlbears focus on the biggest threats first?) These kinds of discussions are very familiar at the D&D table, where there’s always a bit of rules lawyering and negotiating between players and the DM about how the rules should really be applied.

When we presented the latest version of the prototype to Ludia management, they also weighed in on the rules. With time in the meeting running out and only a single surviving fighter facing a wounded green dragon, the company president looked at me and said, “Wouldn’t it make more sense if my fighter drank the potion of giant’s strength and attacked in the same turn? How long should it really take to drink a potion and swing the axe?” I nodded agreement. Two dice rolls and two +6 bonuses later, the dragon lay dead, and it was time to deal out the treasure. We’d found the fun. Now we needed the owlbears. And the heroes. 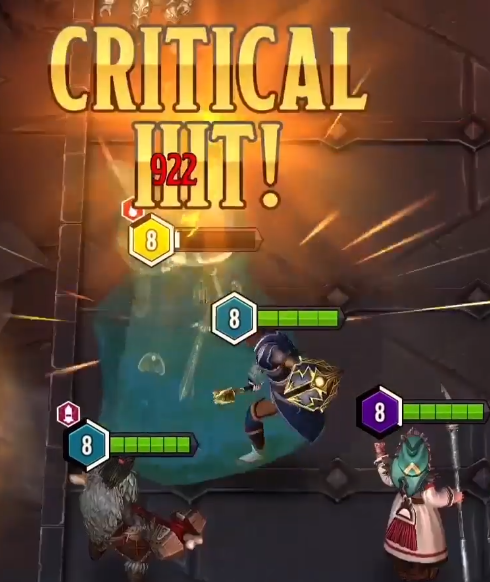 Where are the owlbears?

When the Ludia team wasn’t developing the paper prototype, they were building the actual mobile game. Since the gameplay was focused on tactical combat on a map, the visuals of the game were designed to maximize the playable space of the battlefield, while having enough detailed heroes and monsters on screen at a high enough resolution to keep combat mechanically and visually interesting.

From a practical point of view, this is what determined how many owlbears are too many owlbears. Heroes take up 1×1 squares on the 4×4 grid, and an owlbear was set as a 2×1 rectangle. All the owlbear visuals and animations were designed with this size in mind.

It’s not enough to create a single owlbear encounter at a single difficulty level. Players need variety. They need to feel as if they are in a truly vast and dangerous forest that could be explored and reveal other threats, clearing by clearing. Like any good Dungeon Master, we wanted to surprise the players with challenges that are unexpected but still fair.

The team of artists, programmers, designers, and testers figured out how to create the environment out of modular wall, floor, obstacle, and transition elements that would be randomized to create a different – but consistent – look for every play session in the area. Similarly, the team created an encounter simulation tool to run through combat scenarios between different starting monster formations and levels versus standardized heroes to create a basic pool of encounters suitable for heroes of any level.

Then we playtested it to make sure that the system worked as planned and expected, and if working as planned and expected was good enough. For example, we used simulated die rolls for attacks to match the tabletop D&D game, but this produced only a 50% success rate, which made fights too long and hard. So, we tweaked the system to keep a 5% chance for a critical hit and a 5% chance for a critical miss, and we had anything in between do at least some damage based on a sliding scale.

There’s nothing like surviving a paw swipe from an owlbear thanks to their bad luck with the dice roll! It may even make a hero bold enough to make a risky attack of their own! 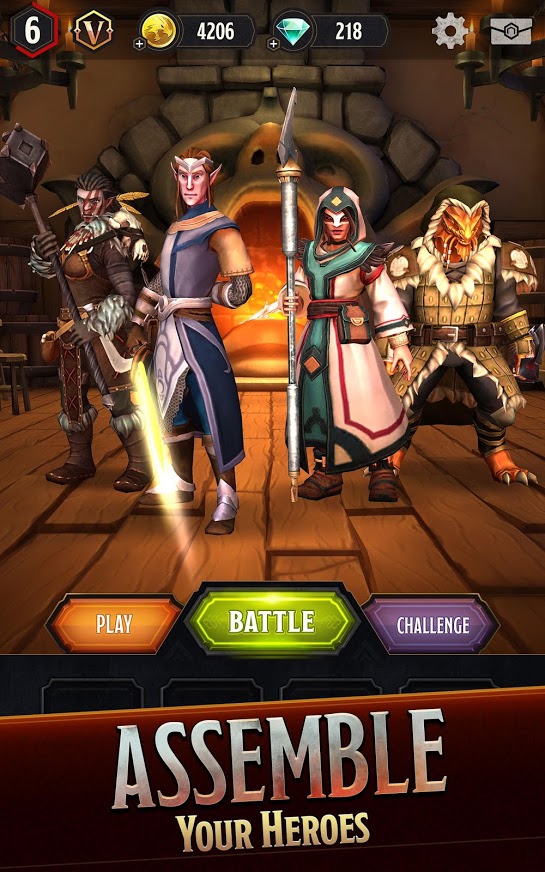 Who will fight the owlbears?

What kind of heroes can withstand an owlbear attack and then keep exploring until the adventure is done? In Warriors of Waterdeep, like Dungeons & Dragons, if a hero is up to the task depends on their gear, teammates, and tactics.

Playing Warriors of Waterdeep involves leading a team of four different heroes into combat. Each hero’s combat abilities come from the equipment that the player has collected as combat rewards, upgraded, and equipped, allowing the player to customize the hero for their play style rather than starting from scratch.

For example, Halbenet the elf cleric has a range of abilities that make sense for clerics from 5th Edition D&D, and the player can pick and choose among the armor pieces, weapons, holy symbols, and wondrous items to create a mix of abilities that lean more towards melee combat or focus on mass healing. Whatever combination is chosen, there’ll be no confusing Halbenet’s melee combat abilities with those of Tommus the halfling fighter, or their healing abilities with those of Calliope the half-elf bard.

Yes, Calliope from Force Grey is a hero in the game, and yes, halfling fighter is a fairly odd combination. How did Tommus come to be?

The answer is still related to owlbears – just as we were figuring out how best to showcase monsters as early in the production process as possible, we wanted to do the same with the heroes. We looked at the core races and classes from the Player’s Handbook and saw the extreme possibilities for basic character types: tall heroes and short heroes, melee fighters and ranged fighters/spellcasters. With a little whimsical mixing and matching, we ended up with Tommus (short/melee), Halbenet (tall/melee), Shevarith the human wizard (tall/spellcaster), and Naomlen the dwarf rogue (short/ranged fighter).

The team built up a library of basic attacks and animations using these starting four heroes as their reference, and then we added new heroes to the game. This time, the heroes came from existing Dungeons & Dragons properties – Saarvin the dragonborn ranger (from the Frost Giant’s Fury comics), Raika the half-orc barbarian (from the Sword Coast Adventurer’s Guide), Calliope, and Farideh the tiefling warlock (from the Brimstone Angels novels by Erin M. Evans).

Players could choose which characters to add to their party as they leveled up, adding more variety to the experience. This also increased the importance of proper game balance, because we wanted players to be able to find a way to win, no matter which heroes they chose.

The players surprised us. Players always do. Not only did the game promote teamwork among the heroes, but it promoted teamwork among the players. They explored the early locations with great speed and enthusiasm, sharing tips and tricks on the game’s social media pages. They found overpowered ability combinations, which led to a round of rebalancing, which then created new favorite combos.

Some players went so far as to post hand-drawn maps of the different encounters – particularly the boss battles – to work out ideal formations and debate winning strategies, bringing Warriors of Waterdeep back to its pencil and paper origins.

There’s always a flurry of questions when players meet their first owlbear. Questions we didn’t anticipate like why did they have to wait so long to find them, why are they so adorable, why do they hit so hard, and can you pet them? Maybe friendly owlbears will appear in a future update.