Publicly shaming your dice might not make your character come alive again, but it might make you feel better.

Presumably you’ve heard, by now, of Cat Shaming – that is, posting a picture of a cat with a sign illuminating others to said cat’s crimes. Well, that lovely phenomenon has made its way to the world of tabletop games with Dice Shaming. We’ve always known that, like cats, dice are finnicky vicious creatures prone to whimsical acts of sheer malice, destructive caprice, and outright betrayal.

Kicking off with a simple post from a Tumblr user, #diceshaming has taken off as gamers let loose years of repressed anti-dice rage. 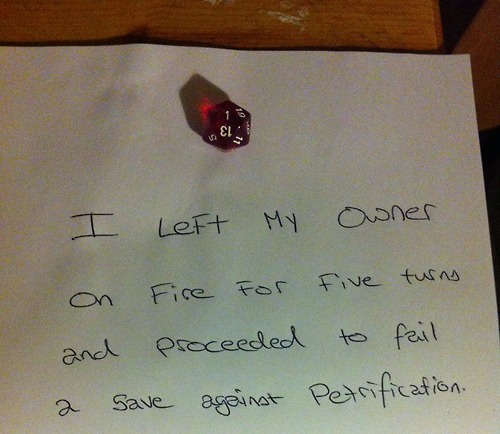 Image Source: The Tribulations of Needle the Weedle

Want to see more? It gets worse. So much worse, in fact, that we’ve waded through to bring you the best of the horrible things that have befallen gamers recently. Purely for your edification, of course, and not to laugh at them. Not at all.

Dice are often shamed for their low rolls.

Photo: You could have killed the guy, but you had other plans. #diceshaming #pathfinder #pfrpg #tabletop… http://t.co/bXRPU7wmJw— James Thorpey (@jamesthorpey) July 15, 2014

Of course, sometimes there’s a singular failure with an interesting story behind it.

Dice don't care what the odds are. Dice will make you fall off a bridge and break both your legs. #DiceShaming #DnD2e pic.twitter.com/onruiqQHhc— Amy Letts (@amuletts) July 11, 2014

could not roll higher than a 3 over 5 turns to save Gilthanas from drowning in the story arc closer. #diceshaming pic.twitter.com/c9sOogO8Bb— Boyan Radakovich (@thegamesmith) July 10, 2014

Failed me on perception checks for loot and rolled a one to resist poison. Made me puke all over myself. #diceshaming pic.twitter.com/QGj9m9sjDQ— Divo (@roguehireling) July 15, 2014

#diceshaming Caused me to fail 3 checks in a night in short time pic.twitter.com/lL1ZEVsTIM— Q (@qhendricks) July 17, 2014

I haven't seen any #Fate dice get their deserved share of #DiceShaming pic.twitter.com/Coi1jAMcCO— That Nap Dragon (@growflet) July 4, 2014

Sometimes you let others borrow your dice when you shouldn’t.

Hungry for more? You can check out #diceshaming on either tumblr or Twitter.