With the third season of Star Trek: Discovery premiering on Thursday, it is worth looking back at the show’s first year. It remains one of the most interesting seasons of Star Trek ever produced.

The first season of Discovery is not perfect. Although there exists a cottage industry of YouTube and Twitter conspiracy theories making unfounded accusations about the show, the first season had a legitimately troubled genesis. The show was created by Deep Space Nine and Voyager writer Bryan Fuller, but he parted ways with CBS All Access in pre-production — reportedly over his unease with the pace of production, but also due to the service’s unease with his ambitious plans.

Fuller was replaced by Gretchen J. Berg and Aaron Harberts. They would leave the show during the second season, following allegations of misconduct. As such, it makes sense that the first season of Discovery is uneven. Its two-part season finale is a mess, especially in its treatment of the mirror universe Philippa Georgiou (Michelle Yeoh). Georgiou plays as a riff on the Intendant (Nana Visitor) from Deep Space Nine, who was already an outdated stereotype when that show aired in the 1990s.

However, Star Trek shows can thrive in chaos. The Next Generation only found its voice during a troubled third season in which it lost one showrunner before the first episode aired and during which half the writing staff quit. This comparison is not unreasonable. The third season of The Next Generation effectively invented a new kind of Star Trek, one that would define the franchise for over a decade to follow under producer Rick Berman. Discovery had to do something similar.

The opening episodes of Discovery make this clear. The first two episodes are set on board the USS Shenzhou and are designed to recall the memory of 1990s Star Trek. Captain Philippa Georgiou cannot help but evoke The Next Generation’s Captain Jean-Luc Picard (Patrick Stewart), right down to giving the character a French name while casting an actor who is not French. The Shenzhou is a ship of peace, crewed by explorers. Georgiou’s first officer is her “Number One.” 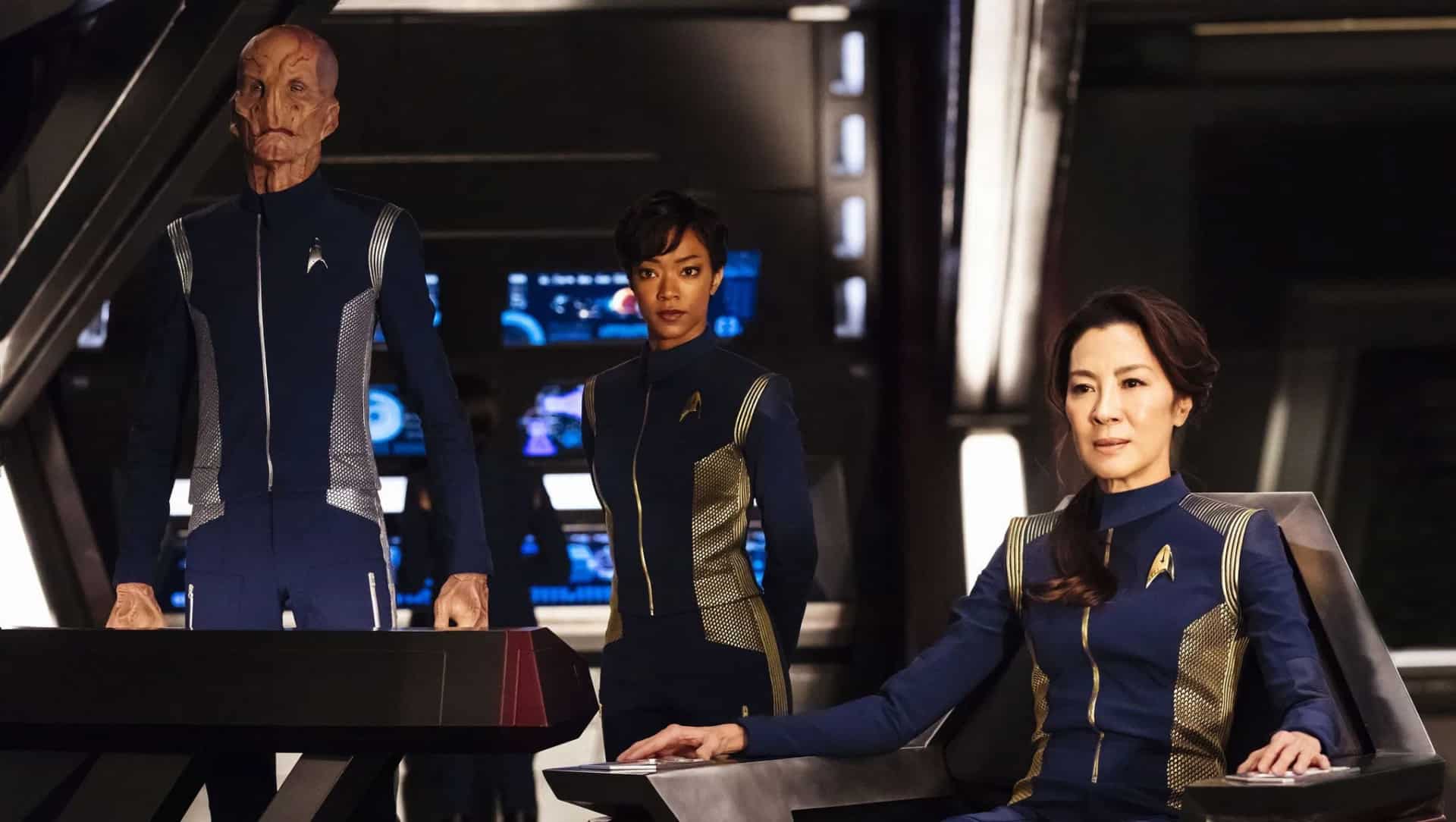 The opening episodes then brutally and aggressively dismantle that version of Star Trek. Georgiou is killed. The Shenzhou is destroyed. The pilot ends with Commander Michael Burnham (Sonequa Martin-Green) sentenced by a military court martial, guilty of starting a war between the Federation and the Klingons. Although the dynamics of The Next Generation would make a return in the animated comedy series Lower Decks, the opening episodes of Discovery draw a line in the sand.

This makes sense. The 1990s were over. The Next Generation had been the product of a different time, a prosperous and stable era. That was over even before Star Trek: Enterprise premiered in September 2001. That final Berman era spin-off would spend its four seasons figuring out how that model of Star Trek could work in the wake of 9/11, even building its underrated third season as an extended allegory trying to reconcile the franchise’s utopianism with the War on Terror.

Discovery arrived at a different time. The show began filming in January 2017, in the wake of one of the most polarizing and divisive elections in recent American history. Critics and pundits compared the climate of the time to the chaos of the late 1960s. It makes sense that Discovery would represent something of a rejection of the aesthetic of The Next Generation and embrace something closer to the tone of the original Star Trek, as evidenced in details as small as the retro design of alien species.

Discovery embraces the psychedelia of the 1960s. The eponymous ship is powered by a “spore drive,” and the character Paul Stamets (Anthony Rapp) is named for a real-life mycologist. Critics joke that Discovery is powered by “magic mushrooms,” but that is entirely the point. (The real-life Stamets is a user of mushrooms.) In Discovery, the mycelial network navigated by the spore drive puts its users in communion with the entire universe and even their alternate selves. 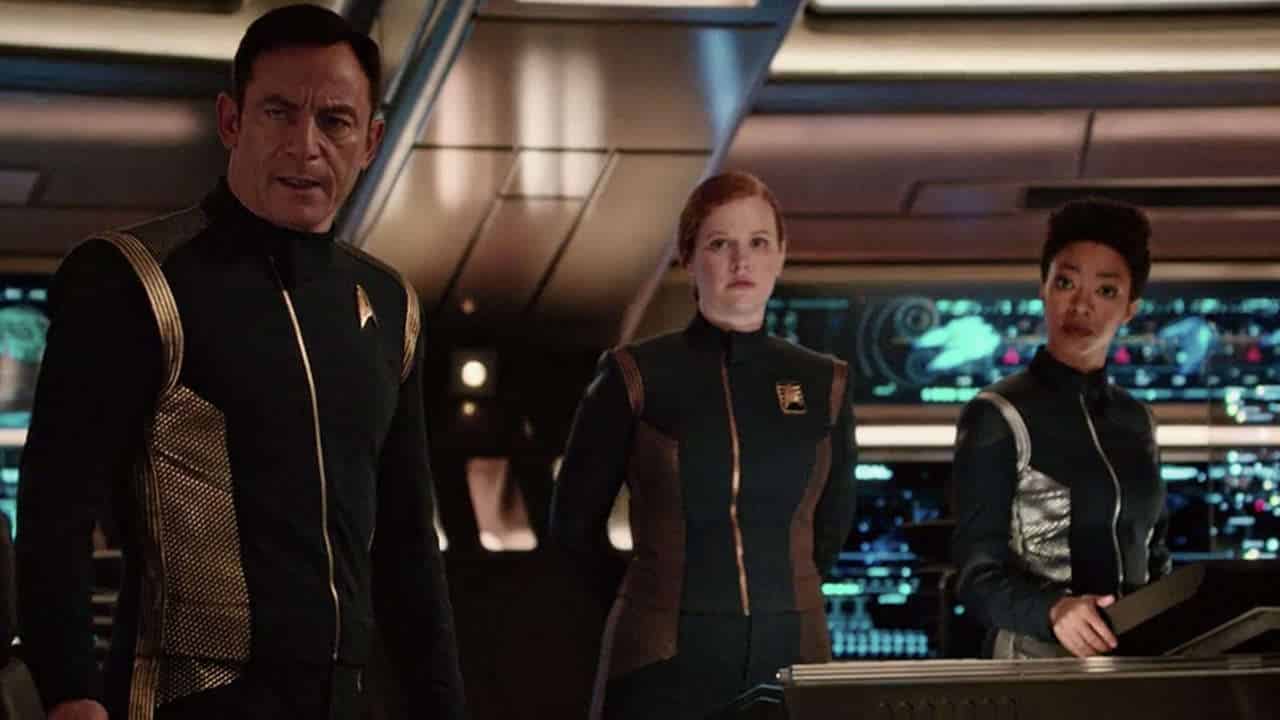 The universe of the original Star Trek was one of chaos and horror. Robert Bloch, an apprentice of H.P. Lovecraft, wrote three episodes. The transporter split characters into their good and bad selves. Waves of madness spread across the cosmos. Spores turned people into hippies. The screams of dying Vulcans could be heard psychically light years away. Spock was “one of the most counterculture figures in mainstream media,” which made sense given his ability to “mind meld” and play the Vulcan lute.

Discovery engages with this version of Star Trek, a foundational part of the franchise obscured by decades of spin-offs. This is most obvious with the character of Captain Gabriel Lorca (Jason Isaacs), who serves as a deconstruction of the popular image of James T. Kirk (William Shatner). That popular version of Kirk differs greatly from the nerdy bookworm suggested by early episodes like “Where No Man Has Gone Before” or “Shore Leave,” shaped by the swagger of the third season and the films.

Like that Kirk, Lorca is a man who plays by his own rules, making tough calls on his own terms. However, Discovery is uneasy with the romanticization of this roguish behavior. When Kirk used sex as a weapon — whether against androids or aliens — the original Star Trek fetishized it. When Lorca does something similar with Admiral Cornwell (Jayne Brook) to avoid her questions about his irrational behavior, Discovery is wary.

Of course, there is a reason why the first season of Discovery might be wary of this stereotype of American masculinity. Isaacs himself explained, “I wanted to say something about Trump.” Trump’s image is built on the stereotype of that sort of impulsive roguish leader as a “man’s man.” Harberts admitted that Trump was “front and center in (their) minds” when crafting the show. This is also reflected in the show’s characterization of the Klingons, who are portrayed as xenophobic and paranoid. 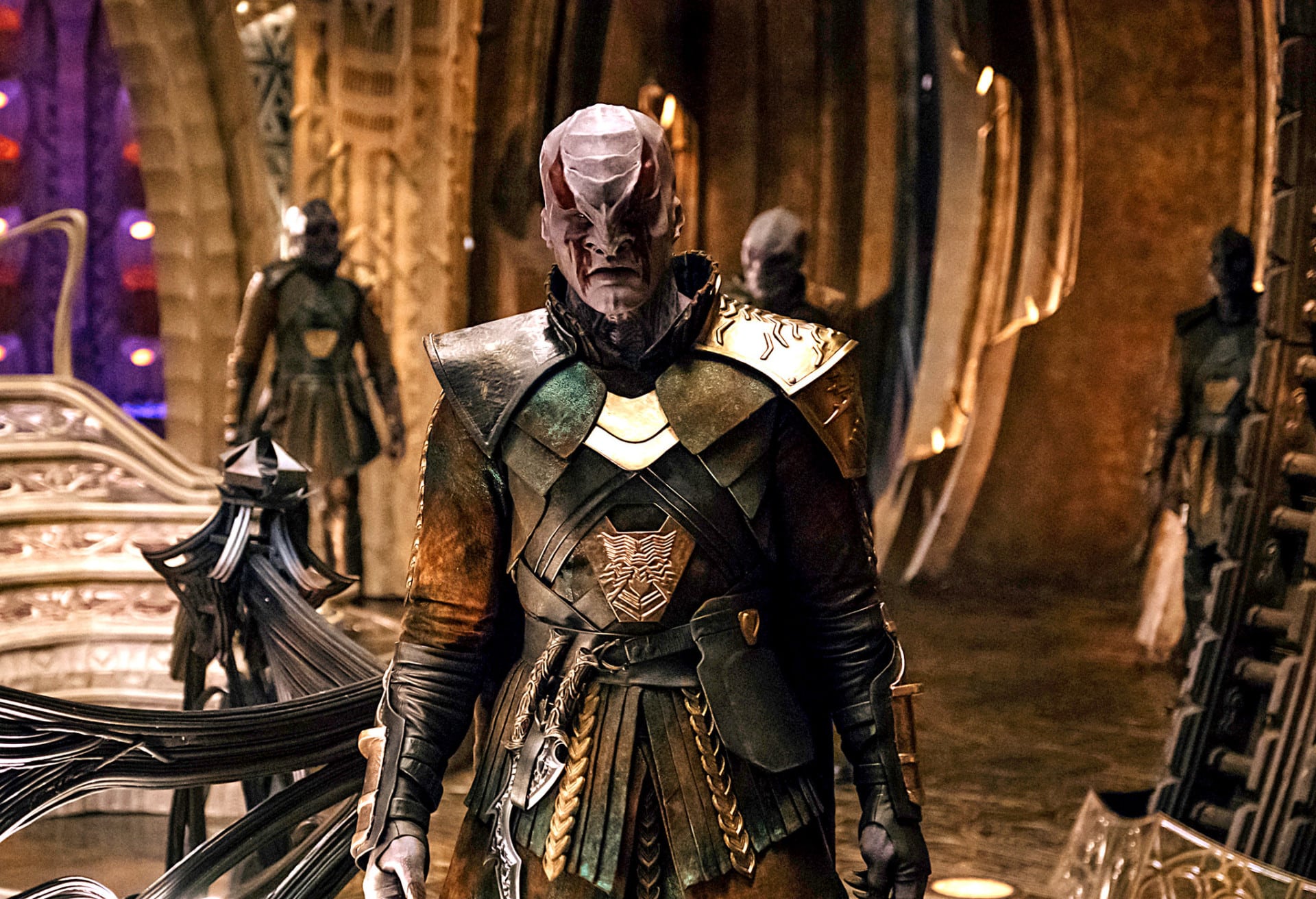 Discovery plays off the original Star Trek. In “Errand of Mercy,” the Klingons were introduced as a racialized other, described in Gene L. Coon’s script as “Oriental, hard-faced.” They were a metaphor for the Chinese, and eventually the Russians. Discovery turns its gaze inwards. The show’s first shot pulls out from the eye of the Klingon leader T’Kuvma (Chris Obi). The Klingons are no longer stand-ins for an outside threat. They are as much a reflection of America as the Federation has been.

When the crew journey into the mirror universe, Burnham learns that humanity and the Klingons are not so different. The Terran Empire is itself an implicit critique of the exceptionalism of the Federation, undermining the assertion that “it can’t happen here” at a point in time when America’s cultural and political norms were under threat. As Michael becomes complicit by doing what it takes to survive in that world, she discovers some boundaries are not as delineated as they might appear.

Marking a clear departure from earlier Star Trek shows, the first season of Discovery is ruthlessly subjective. It is the story of Michael Burnham. Everything in the show is designed to reflect Burnham’s journey and arc. Its narrative and thematic dynamics all bend towards Burnham, with everything playing out her psychodrama as she comes to terms with her failure and her part in the death of Georgiou. Befitting the psychedelic motif, this is a voyage of self-discovery. 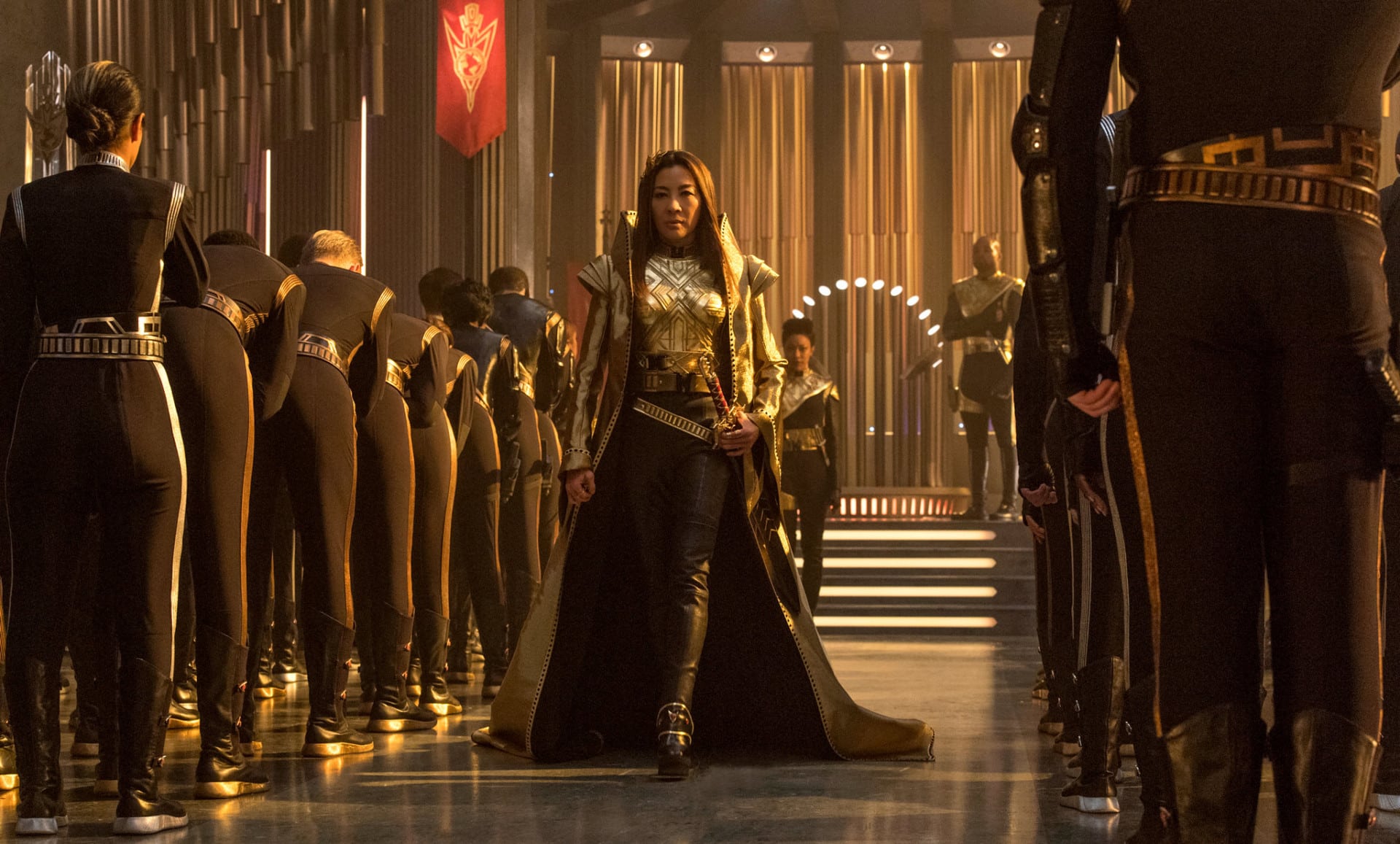 All of the characters on Discovery serve Burnham. Saru (Doug Jones) is a walking reminder of what happened on the Shenzhou. Ash Tyler (Shazad Latif) struggles with PTSD and reconciling two different cultures, like Burnham. Cadet Tilly (Mary Wiseman) embodies Burnham’s faith in Starfleet as an institution. Even Stamets reflects Burnham’s need to mellow and open herself up to the universe. The mirror Georgiou exists so that Burnham can save her and redeem her failure on the Shenzhou.

Central to this is Burnham learning to value and accept her emotions. At the start of the season, Burnham has repressed her feelings and convinced herself that she is acting rationally, even when she is clearly affected by past trauma. The first season of Discovery repeatedly alludes to Vulcan “logic extremists” who are responsible for horrible acts, perhaps a reflection of the obsession with “rationalism” on the extreme right.

The first season of Discovery fits with a wave of contemporaneous high-profile science fiction about female protagonists accepting emotion as a valid means of expression. In Interstellar, Amelia Brand’s (Anne Hathaway) argument for love as a universal force is validated over Dr. Mann’s (Matt Damon) self-serving rationalizations. In Captain Marvel, Carol Danvers (Brie Larson) only fulfills her potential when she ignores Yon-Rogg’s (Jude Law) instruction to control her emotions and fight on his terms.

Again, this arc ties back to the original Star Trek. Spock (Leonard Nimoy) spends most of the show terrified of his emotions — and frequently overwhelmed by them. However, over the course of the series and the films that followed, especially The Motion Picture and The Voyage Home, Spock learns to embrace and reconcile his emotions rather than suppress them. The first season of Discovery simply foregrounds this arc and anchors it in the franchise’s forgotten history of psychedelia.

The first season of Discovery offers audiences a very different type of Star Trek. It is rough around the edges, but it also manages to tie the franchise’s history to the present. In this sense, the nostalgic and hollow pandering of the second season is a grave disappointment. The first season of Discovery went to strange new worlds for the 50-year-old franchise, and it went boldly.