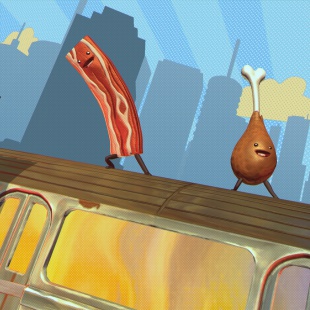 Does beat-boxing fruit and meat get your attention for a rhythm game using the Kinect?

I can confirm that I have no rhythm; I am terrible at Fantasia. But I want to enjoy my time with this game from Harmonix, the team behind Rock Band and Dance Dentral. Music is a passion for me – there’s always something playing in my office as I pound the keys – and I was impressed with Fantasia‘s meld of fantasy and modern music. Using Kinect, you can “conduct” each song on Harmonix’s impressive list with hits from Depeche Mode’s “Enjoy the Silence” to Fun’s “Some Nights” to classical pieces like the “Nutcracker.” Conducting usually involves moving your hands around to the prompts on the screen, but Nick Chester from Harmonix told me you can use any part of your body if you are so inclined. It’s a perfect game for parents to enjoy with their kids, I just hope that the learning curve isn’t too steep. (Not for the kids but for non-talented hacks like me.)

Just because the game’s core gameplay is moving your hands to the rhythm of each song doesn’t mean there is no story. Far from it, as we got to see in the demonstration at the Pre-E3 event in May. In Fantasia, you are another apprentice of Yen Sid the wizard from that one short in Disney’s seminal animated film. Unfortunately, you do about as good a job as Mickey in mucking up the place, and you accidentally release something called “The Noise” into the realms. Another previous apprentice, a human girl named Scout, helps you travel to the different realms to track down the Noise and bring music back to the world. It’s a thin thread of narrative, but it will be enough to frame the exploration and rhythm gameplay of Fantasia.

Incidentally, Scout is voiced by Jacqueline Emerson, who played Foxface in Hunger Games: Catching Fire. No, Scout does not have to fight for life in an arena run annually by a totalitarian dystopian government, as far as I know.

The progression of Fantasia will take you to various areas to explore using a 3D cursor with the Kinect. By interacting with certain places in the panorama of, say, the Neighborhood, you’ll unlock fun little animations. The interaction usually means playing through one of the three songs associated with each area, but it can also be something simple like moving balloons to trigger the elephant animation of a billboard to make the animal float out into the 3D space.

One of the weirdest and most interesting interactions involves the subway of the Neighborhood. Going down into the station will prompt you with a choice: vegetables or meat? Choosing one will give you three street performers in the shape of the food you chose, and you can manipulate the notes of their singing using hand motions with the Kinect. Once you are happy with the sounds all three create, the trio will perform your musical composition every time the train goes by in the Neighborhood. It’s a weird little detail in a game full of weird details. I loved how it blended gameplay with creativity.

Which is kind of what Fantasia is all about. I’m excited to play more of it and finally get the hang of it.

Look for Fantasia: Music Evolved to release on the Xbox One and the Xbox 360 with Kinect on October 21st, 2014.

Here’s the full list of songs Harmonix has confirmed to appear in the game so far:

Depeche Mode – “Enjoy the Silence”
Drake – “Take Care” (ft. Rihanna)
Tchaikovsky – “The Nutcracker Medley”
Police – “Message in a Bottle”
MIA – “Galang”
The Who – “The Real Me”

Look for Fantasia: Music Evolved to release on the Xbox One and the Xbox 360 with Kinect on October 21st, 2014.