Divinity: Original Sin was a part of the RPG renaissance on the PC when it was released late last year. Alongside Wasteland 2, Pillars of Eternity, and the upcoming Torment: Tides of Numenera, the game is a throwback to the classic isometric RPGs of the late ’90s and early 2000’s, made popular on the PC by Interplay.

The turn-based strategy game can be played alone or online (or offline on a couch in split-screen) with support for up to two players in co-op. Combat is turn-based and the characters controlled by each player interact with one another in “dual-dialog.” Disagreements, which can happen, are resolved through a game of rock, paper, scissors.

Divinity: Original Sin Enhanced Edition has come a long way since its original release on the PC. Now available for both the PS4 and Xbox One in addition to a new release on the PC (free for owners of the original game), the game has been upgraded in numerous ways, along with a UI with full controller support across all three platforms, just to name a few changes. 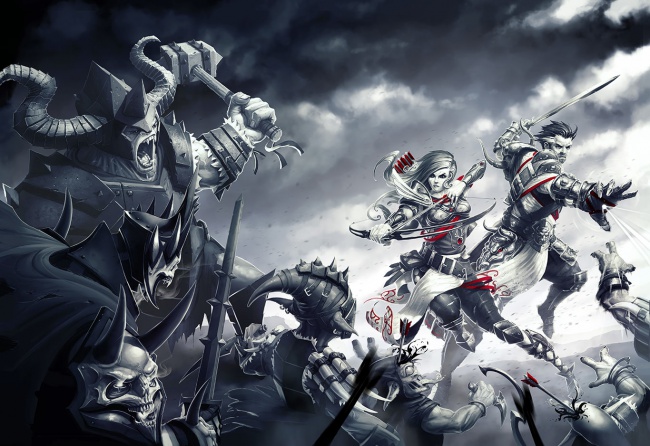 It can be difficult to imagine how a heavily mouse-driven game could be played with a controller, but the Enhanced Edition‘s controls feel perfectly natural, even on the PC. Characters are directly controlled with the left thumbstick instead of being ordered to move around like in an RTS. Furthermore, the implementation of radial menus and informative tooltips accommodate playing with the controller. I had no problem managing each of my four party members using the new system, though I did find inventory management to be slightly cumbersome given the number of items I had across my characters’ inventories.

Beyond the new control scheme and UI, the game sees some marked improvements to its visuals, with flashier particle effects and lighting. Additionally, the camera can now be fully rotated so you’ll always have a good view of the action, which would sometimes be obscured behind foliage or structures.

Technical details aside, Divinity: Original Sin offers an extensive story campaign filled with interesting characters and well-written dialog, all of which are now fully voiced in the Enhanced Edition. There are also four modes you can choose to start a new game with, which cater to players with different tastes. I chose to play in Classic Mode, which offers a balanced blend of story and tactical combat.

You take on the roles of a pair of Source Hunters, who are the world of Rivellon’s equivalent of inquisitors. Part detective, and part bounty hunter, the two Source Hunters solve murders, slay evil wizards, and dispense justice throughout the land. Being given the option to design each of the two characters to my preference, I created a male sword-and-shield Knight and a female bow-using Ranger with an affinity for wildlife. Interestingly, her ability to speak with animals opened a broad set of fully-voiced dialogue that would have been otherwise inaccessible to any other character. The selectable perks allowed me to define my characters well beyond their core classes.

Like any good RPG, the dialog options allow you to roleplay your characters in a variety of ways, influencing the outcomes of the missions you undertake. Early in my adventure, I angered a murder suspect with snide accusations about her involvement, which caused her to stop speaking to me entirely. To solve the case, I had to find other solutions to work around her distrust. My Ranger’s sneaking ability came in handy for gathering evidence that I couldn’t otherwise obtain. I also made sure to pilfer a few expensive paintings and silverware while I was at it.

Outside of the story beats, a good portion of the game consists of tactical turn-based combat. It plays a lot like XCOM, with the addition of interactive environments and elemental synergies. For example, you can have a spellcaster cast a rain spell to drench enemies and have an archer electrocute them with a lightning arrow for extra damage and stunning. Likewise, setting fire to an oil slick will cause it to burn anyone standing within it. The combat offers a tactical dimension not usually present in most RPGs.

Divinity: Original Sin is an excellent role-playing game that’s made even better with the Enhanced Edition. Updated graphics, fully-voiced dialog and an expanded story make it worthwhile even for those who’ve already played the original game. I got a lot of mileage out of this one.

Recommendation: If you missed Divinity: Original Sin when it was first released, there’s no better time to pick the game up now that it’s been given a great deal of polish.