Sharp writing, superb acting and surprising character revelations make this tightly-paced episode one of the best in a very long time.

I’ve been waiting a very long time for an episode like this. Since June 5, 2010 to be exact. That’s when the wonderful Vincent and the Doctor aired. That episode managed to draw you in with Matt Smith’s trademark manic fun, but then gut punched you with the raw emotion of exploring van Gogh’s struggle with depression and suicide. Listen is another triumph in storytelling for the series, but for different reasons. Though the story mainly focuses on Clara trying to balance a personal life and the Doctor’s demands of companionship on his latest insane adventure, by the end it quietly, but powerfully ties together many elements introduced in the series over the last few years to give you a brand new insight into what really drives the Doctor. And that’s quite an accomplishment to pull off for a series that has been going on as long as this one.

If you want to tune in yourself, you can can new episodes of BBC America — though cord-cutters will have to pick up the current season on iTunes or Amazon Instant. If you want to catch up on earlier seasons, they can be found on both Netflix and Hulu.

To get you up to speed, in the previous episodes:

The Perils of Having a Personal Life

At first, I was going to snarkily rename this season The Continuing Adventures of The Clever Girl and Her Companion Old Mr. Grumpypants. Since the new season began and Peter Capaldi took the lead on the show, the Doctor has been his usual difficult, erratic, condescending self, but without the the charm and and smoothness of his last two incarnations. At the same time, Clara suddenly got a lot more interesting. She went from doe-eyed, unquestioning disciple of the Doctor to wary companion who must rein him in when he runs off into the narcissistic deep end of his madcap adventures. This led the first three episodes of the season to focus more on the newly-capable Clara and less on the Doctor who seems to be madly rushing from adventure to adventure in a dark, aggressive stab at self-discovery

This week’s episode at first looked like it was shaping up much the same as the previous ones. The focus was clearly on Clara as she tried desperately to lead a normal life by going on a date with fellow teacher Danny Pink, while her association with the Doctor, and her own nervousness, kept tripping her up. This is a story formula that worked quite well during the early years of Buffy The Vampire Slayer, but in that case it made more sense given Buffy was the lead of the ensemble (yes, it was definitely an ensemble show, it wouldn’t have worked without the Scooby gang.) The Doctor, in the meantime, became obsessed with the idea that evolution had produced creatures that perfected the art of hiding as the ultimate survival technique. These perfect chameleons were always present in our lives, sometimes being glimpsed in the corner of the mirror or in one’s bedroom in the middle of the night taking form as the collective nightmare of the monster under the bed. The Doctor thought that if you just stopped to listen, you might be able to hear them communicate. 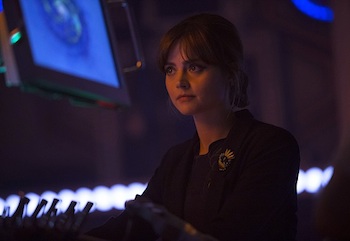 To prove his theory, he picks up Clara after her disasterous date with Danny where she brought up the touchy subject of his previous career as a soldier (she saw it as killing, he saw it as protecting and in fact had spent much of his time digging wells in poor villages.) Figuring she also has had the nightmare of the monster under the bed, he connects her telepathically to the TARDIS so that her subconscious can guide the time machine to the point in her past when she met one of these creatures in her dreams and the Doctor can prove his theory. But during the navigation, Danny calls her on cel phone and instead of landing in her past, they land in his at a Gloucester orphanage. They discover that Danny’s real name is Rupert and he hates it. In his room they confront one of these creatures which is hiding under Danny’s covers. The Doctor (after making a not-so-veiled reference to master chameleon of the “Where’s Wally?” books) tells young Rupert that fear is good. It is a superpower that allows you move faster, think better and be stronger when you need it most and then you’re the dangerous one, not the thing that is threatening you. He then turns his back on it and convinces the other two to do the same so it won’t hurt them and it disappears.

The boy is understandably shaken and the Doctor, predictably for this incarnation, has nothing comforting to say. Clara finds Rupert’s toy soldiers and tells the boy they will protect him at night. One of them doesn’t have a weapon and Clara explains it doesn’t need one to keep the world safe. Kind of like the Doctor. Huh. Rupert decides to call it Dan and it dawns on Clara what she has done to shape the future of her maybe-boyfriend Danny Pink.

Deciding she has been too harsh on him at the dinner, Clara has the Doctor drop her off at the eatery again. At first she makes amends with Danny, but then accidently calls him Rupert. He realizes something is up and confronts her wanting to know what is really going on, but she lies to cover up her secret life as a time traveler and he leaves angrily. An astronaut then enters the restaurant and beckons her to follow him into the TARDIS. Turns out it’s Danny Pink’s great-grandson, Orson Pink, who looks just like him, but older. 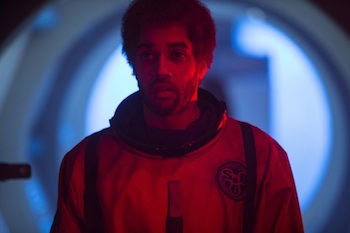 To The End of Time…Again

The Doctor, not knowing that Clara has any kind of connection to Danny Pink, explains that he sent the TARDIS to sniff out another lead based on its telepathic connection to Clara. It sent him to the end of time where Orson was the last living entity in the universe, having been sent there in a time traveling experiment a 100 years from the present time. Orson has the toy soldier Clara gave to young Rupert, saying it was family heirloom and that there is a history of time traveling in his family. Is Clara his great-grandmother? Possibly…

The Doctor takes them all to the end of time where he found Orson stranded because he thinks the perfectly hidden creatures are there and want to be found. When something pounds on the door leading to the barren atmosphere of whatever god-forsaken planet still exists at the end of time, the Doctor orders Orson and Clara into the TARDIS for safety and opens the door to finally meet these creatures.

With the airlock blown, the Doctor, who clearly didn’t think this through, holds on to anything in an attempt to not get blow out into oblivion. Orson pulls him back into the TARDIS where he slumps in a chair unconscious and Clara tries the telepathic link navigation trick to get them out of there, but just like last time, she gets distracted, this time by the Doctor wheezing. They land in a rustic barn at night where a small, unseen boy cries on a bed of straw. Clara scrambles under his bed when two adults enter and this where things get very, very interesting. Upset that he won’t come in the house with the other boys the man declares that if he keeps this up he’ll never get into the army or become a Time Lord. 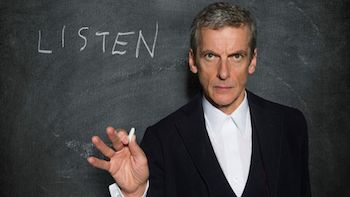 Tell Me About Your Relationship With Your Mother

Clara realizes she has landed in the Doctor’s past. That he was an orphan and wanted to be a soldier as a way to become one of the elite of Gallifreyan society known a Time Lord. Capaldi’s Doctor wakes up in the TARDIS and starts shouting for Clara and when the boy gets out of bed to see who is yelling, Clara knows he shouldn’t meet himself and reflexively reaches out from under the bed to stop him by grabbing his ankle. And it suddenly dawns on her that she is the monster under the bed the Doctor has been obsessively chasing all the way to the end of time in search of companionship.

Throughout the series, much has been made of the Doctor’s need for a companion. That when he is without one, he does terrible things. That he needs a human being by his side to pull him back when he goes too far. And that is exactly what Clara has transformed into this season. But she has more involvement than that. She gives the scared young Doctor the “fear is your superpower and it’s ok to be afraid” speech the grown Doctor gave young Rupert. But she adds the part that is a revelation into the Doctor’s motivations since day one: fear is always your companion and will never leave you. She continues by telling him that when he is afraid the most, and here we flash to the War Doctor approaching the very barn they are in now on his way (he thinks) to detonate the weapon that will be an act of genocide on his own people in The Day of the Doctor, on that day he will discover that fear can make you kind instead of cruel. She then leaves Orson’s army man (the one without the gun) to protect him.

It seems clear now that the Doctor’s manic search for these unseeable, always-present entities in this episode may have come from his youth where he felt alone and abandoned at a Gallifreyan orphanage where his only true, constant companion was fear. And that miserable, lonely youth also drives his need to search out a human companion throughout the series.

Yes, Clara was the driving force yet again in the story, but this time it was a story truly about the Doctor where we learn things about him we never knew before and we are left with a deeper understanding of his need for companionship and the way he harnesses his fear into action to help others. On top of that, Clara’s story moves forward as well, in true Joss Whedoneque fashion, when at the end of the episode she finally makes a connection with the adult Danny Pink. This episode was so well done all around, I sincerely hope the next one of this caliber won’t be another four years down the line.