I’ve got a question for you johnnies who like multiplayer. I’ve long harped on that I have little interest in it, but sometimes it’s important for a community to field a question or two from the outside perspective so that we can re-assess the things that we unthinkingly accept. It is the duty of the child to point out that the emperor has no clothes. And we’d all be much better people if, when someone’s dad walks in the convention hall and asks why everyone is dressed like Japanese cartoon characters, we didn’t actually continue until we had an answer that satisfied him.

Anyway, the question. Is there really much point in a fighting game – a one-on-one type like Street Fighter or, to a lesser extent, more brawler-y stuff like Anarchy Reigns – having online multiplayer? It just seems like a terrible waste of effort.

Local multiplayer, sure, that’s where the fighting game wears its princely crown. If I’m hanging out with friends then I find a fighting game works nicely as a little palate cleanser between less fluffy stuff, when everyone regardless of skill level can at the very least palm the buttons randomly and still hold their own. It’s just that with online multiplayer all that social element is removed – you don’t really communicate with the other player, no one’s watching and cheering you on as they wait for their go, and if things aren’t going so well you can’t distract your opponent by leaning over and kissing them on the cheek. And there can’t be the same incentive to win if the other player isn’t in the room and could conceivably get all smarmy and up in your face about his victory until you want to smash him over the head with your chair.

It’s the same issue I raised with Resident Evil 6‘s co-op: it seems like an uncommunicative human player on the other end of a space wire is indistinguishable from – and less efficient than – an AI. Shooters, strategy games, sure, online multiplayer your gregarious balls off. The freedom of movement, tactics and responses involved all require the kind of creative thinking best done by a human. But your average melee fighting arrangement, and forgive me if this seems like an oversimplification, is two people running up to each other and hoping they can press buttons in sequence in such a way that overpowers the sequence of buttons the other person uses.

The way I see it, you play against a human in a fighting game, there are two extremes. Either you’re against a completely unskilled and unpracticed person who will probably hit buttons randomly until something starts working for them, in which they case they will keep doing that, or you’re against a complete expert who has memorized the most efficient possible move and counter for every situation. And both of those modes of behavior would be easy to simulate with the right algorithms. The most complicated thing would be to create a player of middling skill, really. In a tactical shooter creativity is the human player’s edge, but there isn’t much room for creativity in a fighting game. The best possible level of skill in a fighter – knowing the exact right response to every situation the other player presents – can be achieved with a relatively straightforward AI.

Well, that’s my outsider’s perspective, and as I say, probably very ignorant. I have a hunch, though, that if you did some kind of scientific test in which fifty humans play against AIs in a fighting game and another fifty play against humans in different rooms with no communication or contact, then no-one would be able to confidently tell which of the groups they were in. And if that’s the case, why even bother? 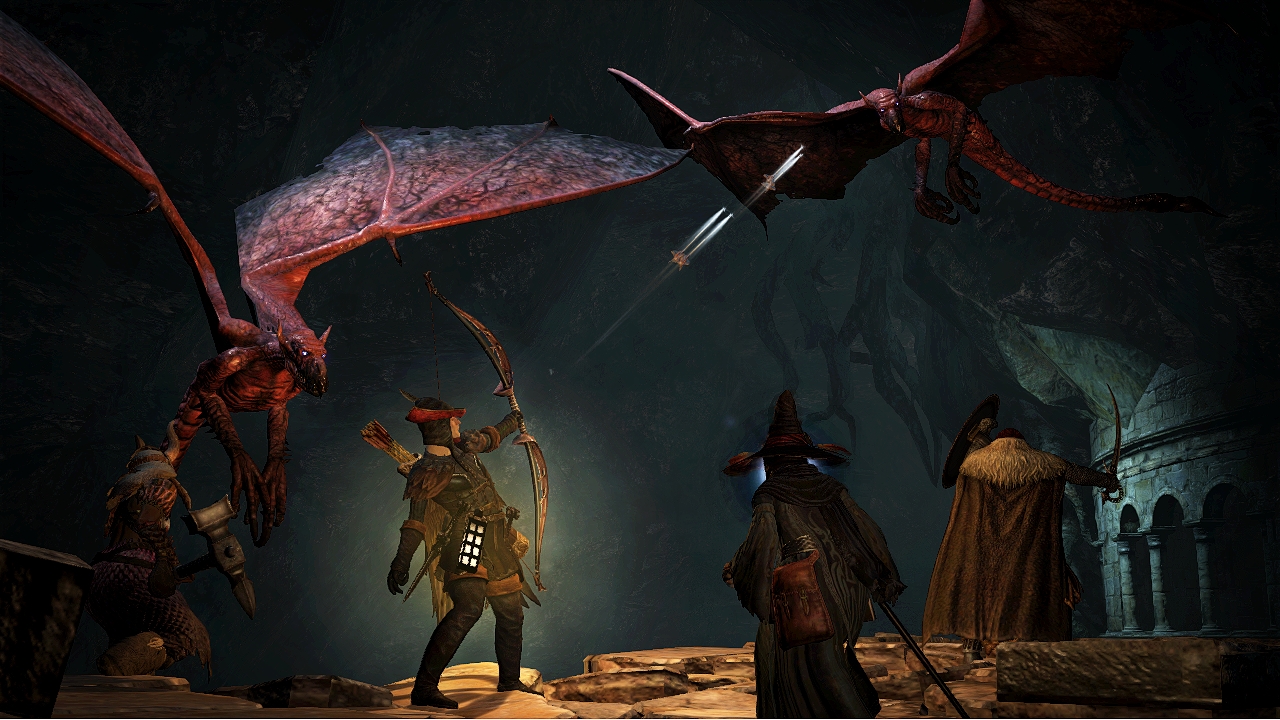 Maybe the ones playing online would be able to tell from the lag, yeah. And that’s another reason why it seems so very pointless to me, because this is ostensibly a style of gameplay all about split-second timing and reaction, and a variable connection speed can make all your skill and experience useless in that regard. Perhaps this is less of an issue outside Australia, though. I just know that when you play sniper in Team Fortress 2 over here you need to lead the shot like your bullets all walk with a fuckin’ zimmerframe.

But now that you’ve indulged this little train of thought on my part, it was while writing this that something else occurred to me. There are some games that have unique asynchronous online elements, like Dragon’s Dogma or ZombiU. In the former your custom sidekick can be hired by other players for fantasy wetwork, and in the latter zombies of your previous characters appear in other people’s games. What struck me, though, was that in Dragon’s Dogma there isn’t a whole lot of variety in sidekicks; the classes are kind of strict and appearances all kind of blur together from a distance. And in ZombiU you had no control over the appearance of your avatars at all. So when they appeared in your game, a character built up by another human player was indistinguishable from one whose qualities had simply been randomly generated from the options available.

I suppose the overall question of this ramble is: what is the purpose of an online multiplayer aspect in which the actions (and evidence of actions) of other human players would, in a double blind trial, be completely indistinguishable from those of an AI or random number generator? What is the point when there’s no actual socializing or creativity or any other benefit a human player ostensibly adds: no communication, complex tactics or completely unique appearance customization, a la Saint’s Row?

You multiplayer types might say you need the sense of competition and inherent stake in proving yourself better than other human players to get the satisfaction you desire. The thing is, though, that that sensation is entirely within your mind. You’d feel it equally if you’d simply been told, and believed, that you were playing against other humans, even if they were actually bots. And that leads me to wonder: how long? How long before some slightly unscrupulous developer working on the latest needlessly four-player co-op shooter realises that his connection functionality is completely fucked, and rather than letting the game screech to a halt every time a player drops out, adds a feature that secretly replaces the lost human player with a bot bearing the same name? Because these days we’d be none the wiser.

And here’s the big question: how do you know that hasn’t happened already? Maybe everyone who thinks they’ve been playing multiplayer for the last five years or so have really been up against increasingly sophisticated bots. Maybe most people grew out of videogames in the early 2000s and now there’s only one actual human being playing them in the world, kept in the dark by a desperate conspiracy on a massive scale. Maybe it’s you. You don’t know that I’m real, either. Maybe these columns are written by a sophisticated algorithm that alternates between outputting weary conjecture and cock analogies. Maybe it’s only been pure chance that there haven’t yet been any obvious errors that might sock puppet malefactor cabbage up the khyber>>>>///REDO FROM START

He is also totally not a sophisticated computer program.