For many Magic fans, tribal decks are some of their favorite to build and play with. Some folks even go so far to take it as an identity of sorts. You don’t just play mono-Black it’s “My Zombie Deck” or you’re known as the person that plays Merfolk in every format.

Among the big important Magic tribes, it’s arguable that Elves is the best, or at least the most supported. From [mtg_card=Rhys the Redeemed] in Commander to [mtg_card=Heritage Druid] in Constructed, Elves have dabbled, or dominated, in basically every format at different times. In fact, the most recent Modern GP just this past weekend was won by an Elves deck piloted by Michael Malone. 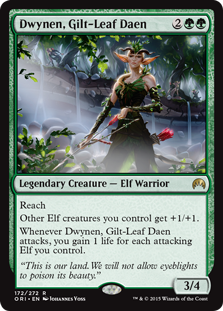 Dwynen, Gilt-Leaf Daen comes from a long line of Elvish lords. Cards like [mtg_card=Elvish Champion] and [mtg_card=Elvish Archdruid] have been staples of many an Elf deck for quite some time. But let’s see how she might stack up in the various formats.

For Legacy she’s a bit too expensive, and that deck is looking to be more combo-oriented than beatdown. The Modern elves deck might be interested in a [mtg_card=Wellwisher] that doesn’t die to most burn spells to sideboard at times, but it’s a big knock that it can’t be hit off [mtg_card=Collected Company].

There’s actually some potential to see Dwynen, Gilt-Leaf Daen in Standard. Granted, currently there are only four elf cards legal in Standard, seeing as there are no elves on Theros or Tarkir, but we already know there will be some other elves in Magic Origins, including a key card [mtg_card=Elvish Visionary]. Also, since the next set is Battle for Zendikar, there will presumably be even more elves coming soon. Zendikar is Nissa’s home plane, and there were certainly elves there when we left – though the Eldrazi might have eaten them all in the meantime.

Most often I suspect Dwynen, Gilt-Leaf Daen will find a home in Commander decks. She’d slot in nicely to last year’s Commander 2014 deck Guided by Nature. That deck already had a strong core to convert into a more dedicated Elf deck. Her lifegain also means that once you’ve assembled your giant murder-elf-ball, you’re not going to lose to the rest of the table turning on you.

Also, her flavor text sounds like she’d fill you with arrows for littering. “This is our land. We will not allow eyeblights to poison its beauty.”