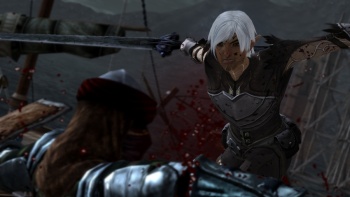 A Dragon Age 2 demo is coming on February 23 but if you happen to work at GameStop you can have it right now.

Good news for everyone feeling doubts about Dragon Age 2: you’ll be able to try before you buy thanks to the demo which will be out a couple of weeks before the game is released. Even better news for those of you who work at GameStop: you can get it now.

“In appreciation of your support of the Dragon Age franchise, BioWare would like you to have early access to the Dragon Age 2 PC demo,” the studio said in a message to GameStop employees on the Dragon Age website. “This exclusive hands on access will allow you to experience one of the year’s most anticipated titles before anyone else.”

Giving exclusive early access to GameStop flunkies may seem a little unusual or even unfair but in reality, it makes a lot of sense. They’re the front-line guys, so giving them a chance to try it out well in advance of the game’s release will, in theory at least, make it easier for them to recommend it for preorder and purchase. It’s as much a training tool as it is a game, albeit it one that sucks a lot less than most of the indoctrinary nonsense retail employees have to put up with.

A special code is necessary to download the early demo and in case anyone gets the wrong idea, the GameStop demo page also includes threats of hellfire and damnation for anyone who dares distribute it to non-employees prior to February 23, which is when the doors will open to the rest of the world. Consider yourself warned!

UPDATE: Despite the fact that the GameStop link is right there, BioWare is maintaining for the moment at least that the demo is not officially confirmed and that any talk about it is thus purely speculation.

“The demo is not ‘confirmed.’ We have made no official announcement. This is speculation, and no matter what it’s based on it shouldn’t be so misleading,” Dragon Age Lead Writer David Gaider wrote on the BioWare forums. “Regardless of what you think we should or shouldn’t be doing (it’s not my place to give info) please keep the fact that this is still all speculation in mind and that you’re self-referencing here.”

UPDATE PART DEUX: Okay, now it’s official. “On February 22, 2011, BioWare will release a demo for Dragon Age 2, allowing gamers on all platforms to experience a portion of this epic action RPG,” the company revealed on the Dragon Age website. The demo will take players through the game’s prologue with one of three character classes, where they’ll learn more about Hawke and begin to hone his heroic abilities, and then to Kirkwall to meet Isabela, a deadly smuggler who also happens to be a romantic interest.

But that’s not all! Completing the demo will unlock Hayder’s Razor, an ancient dwarven blade that boosts health, mana and combat abilities in the full release of Dragon Age 2.

So there you have it, a real-and-for-true across all three platforms and an unlock to boot! What more could anyone ask for?