Dragoncon 2014 is long since past us, but don’t think I’m not still thinking about it. The beautiful city of Atlanta. The amazing cosplay. The heat and humidity. Oh god it was terrifyingly hot. But also the great cosplay, and speaking of, I still haven’t shown you even a fraction of the cosplay creations I saw on the scene. But today, I’m going to begin making up for that.

Related: Be sure and check out our previous coverage of Dragoncon 2014 here.

Below, you’ll find out favorite costumes from the Marvel universe. Trust me when I tell you that they were as intricate – and incredibly thick and bulky – as they appear. These people really did suffer for their art, but we get to reap the rewards, so thanks, guys! First up, here’s the entire Marvel universe from the Marvel photo shoot. 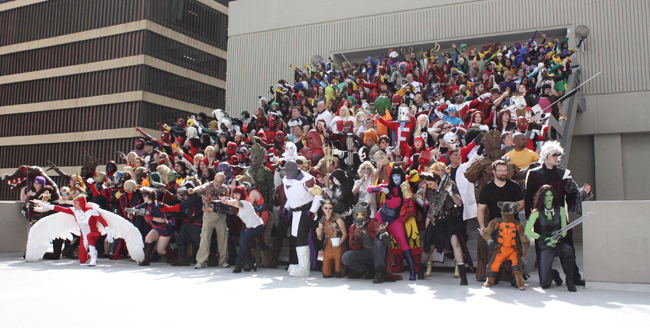 Here are three pics from the Loki shoot. Every Loki here is suitably menacing and, btw, demonstrate how much Tom Hiddleston managed to make the ridiculousness of the Loki outfit cool through sheer force of awesomeness. 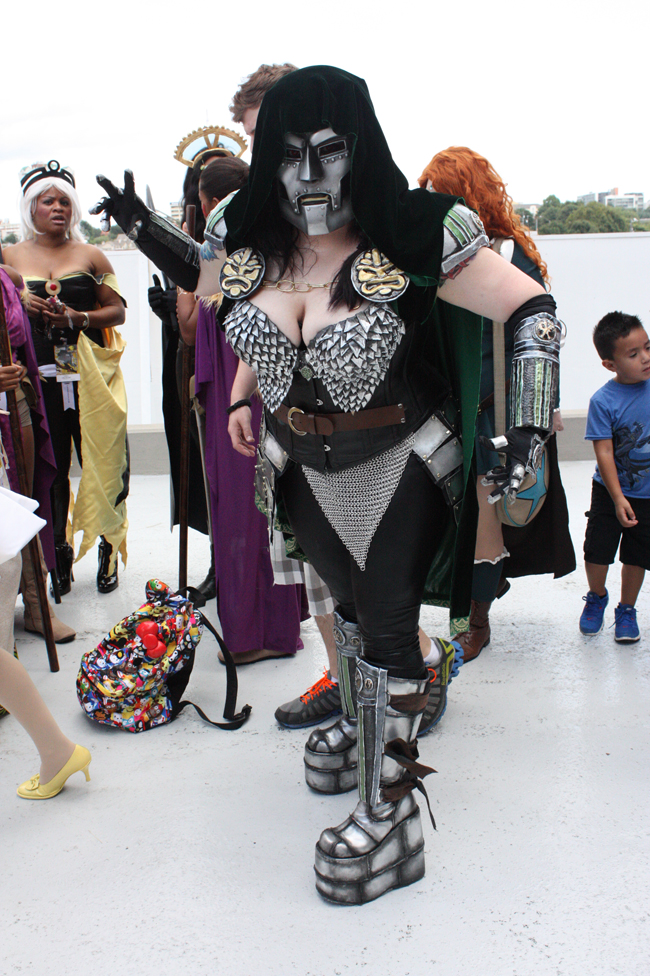 This is only the first awesome Doctor Doom costume of this gallery. 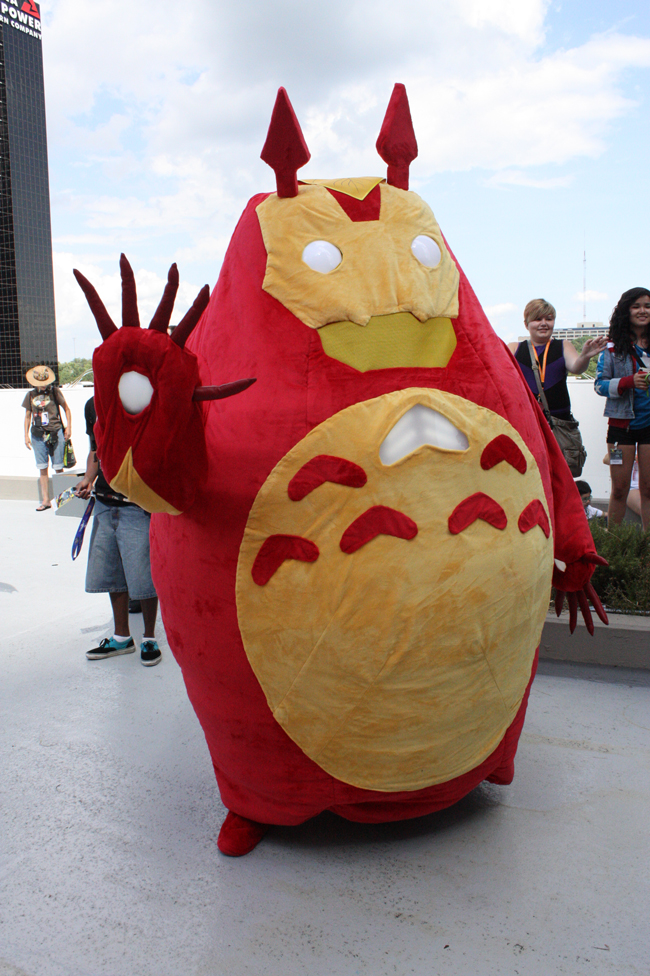 Yes, this is an Iron Man Totoro. Thank Team Totoro cosplay for bringing this into your life. 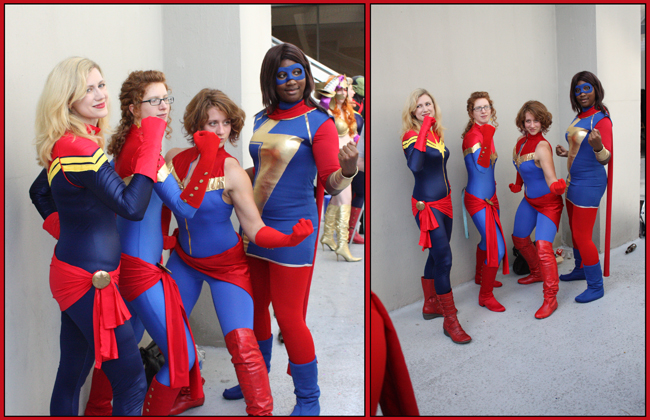 Here’s a trio of Carol Danvers joined by a Kamala Khan. 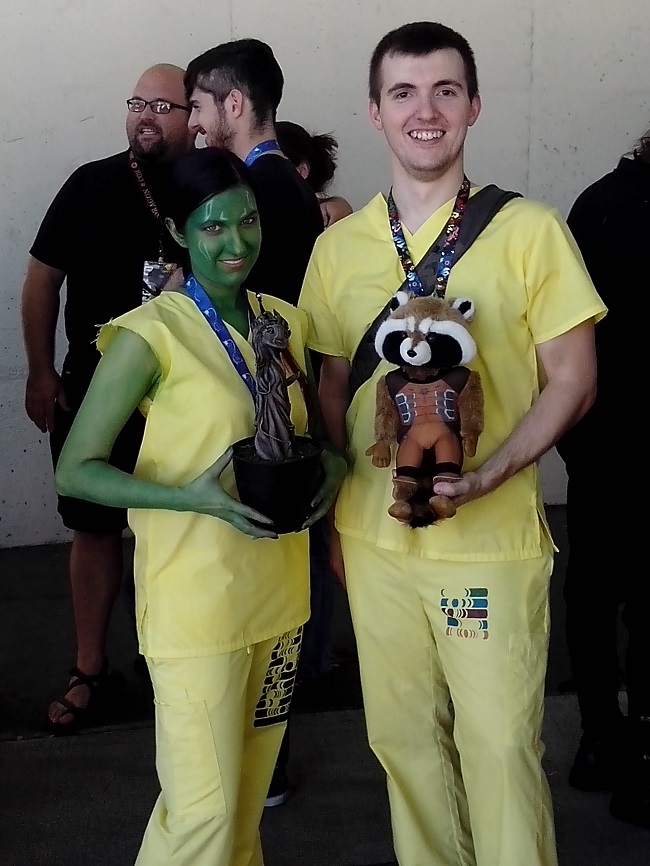 These two made it into our Dragoncon 2014 day one cosplay gallery, but I like their costumes so much I’ve gone ahead and included it here too. You’re welcome. 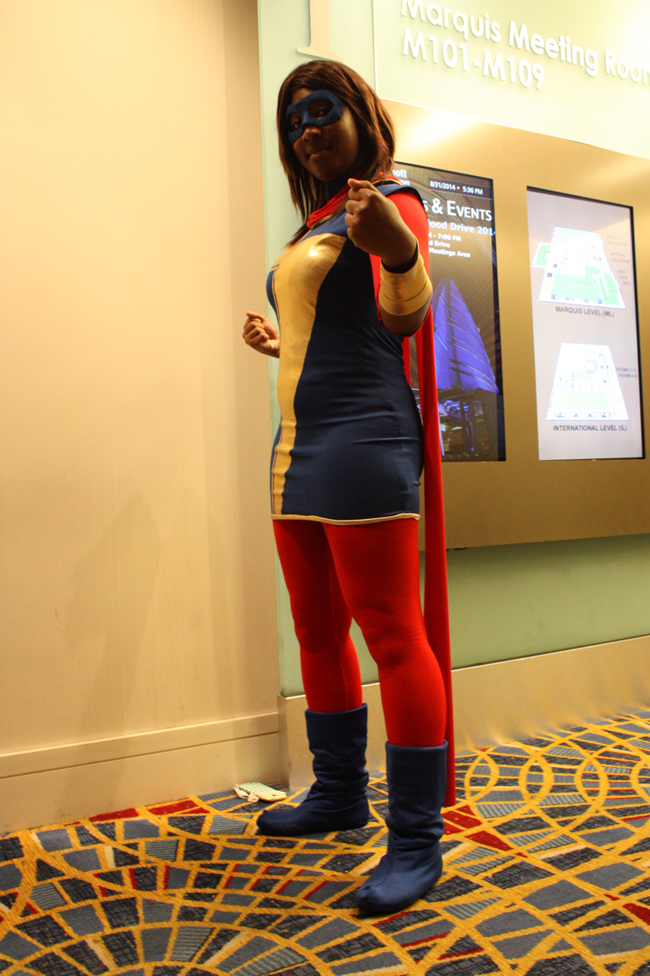 Another shot of Kamala Khan, because this is seriously a great costume. BTW, this is Ashmia Jay, and you can see more of her stuff on Instagram. 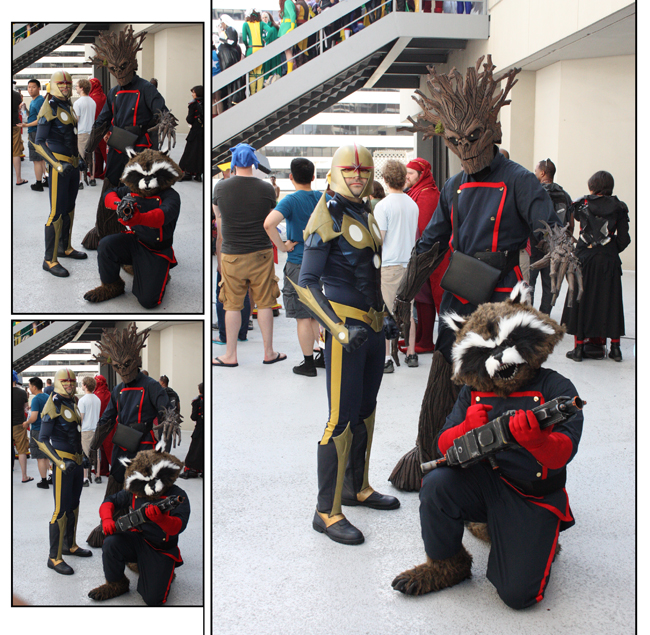 A trio of Guardians, and special Escapist cameo: Groot is our own Newton Grant’s brother. 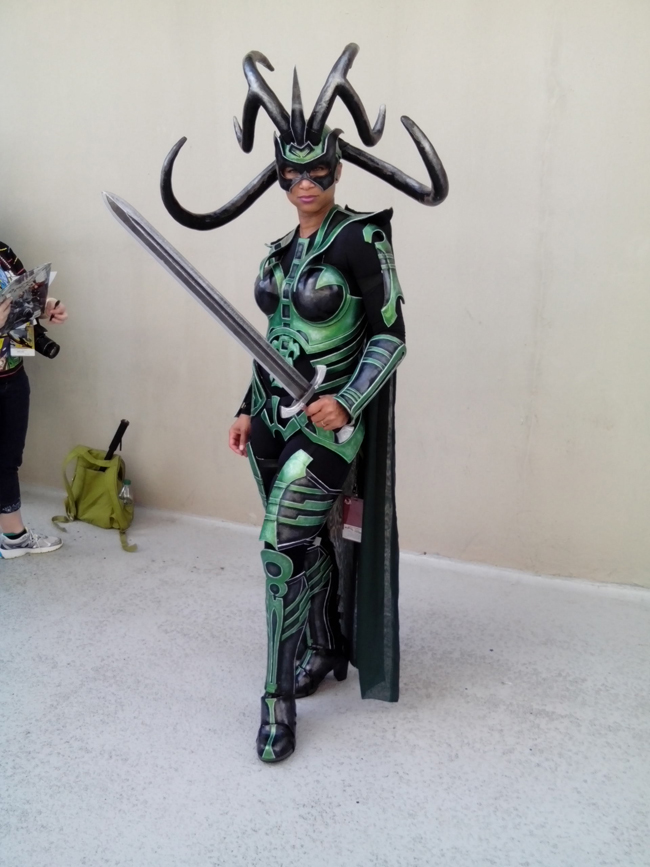 Here is what has to be the greatest Hela ever attempted. Christ this is amazing. 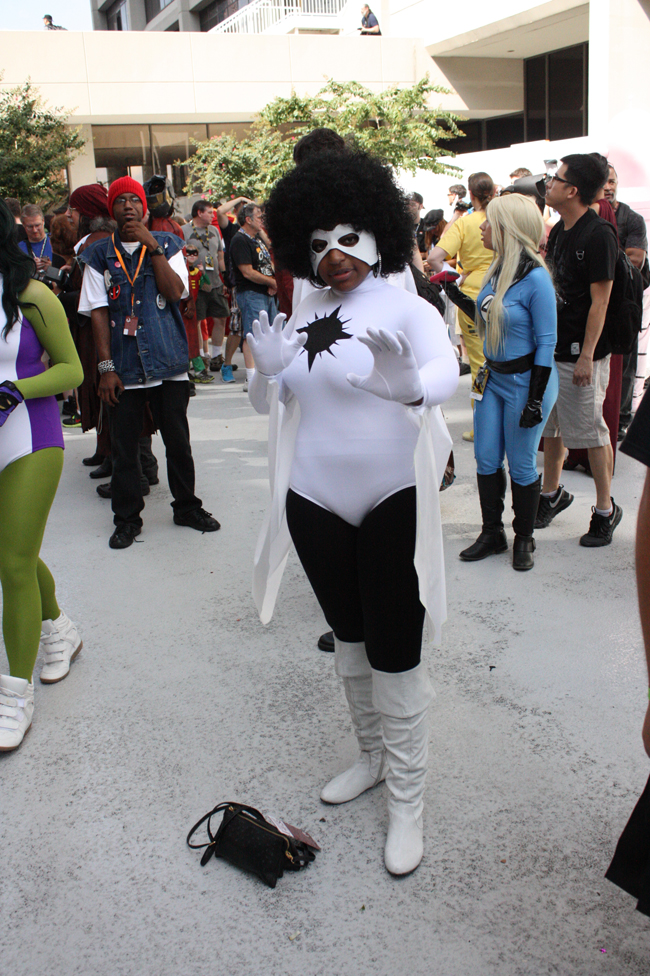 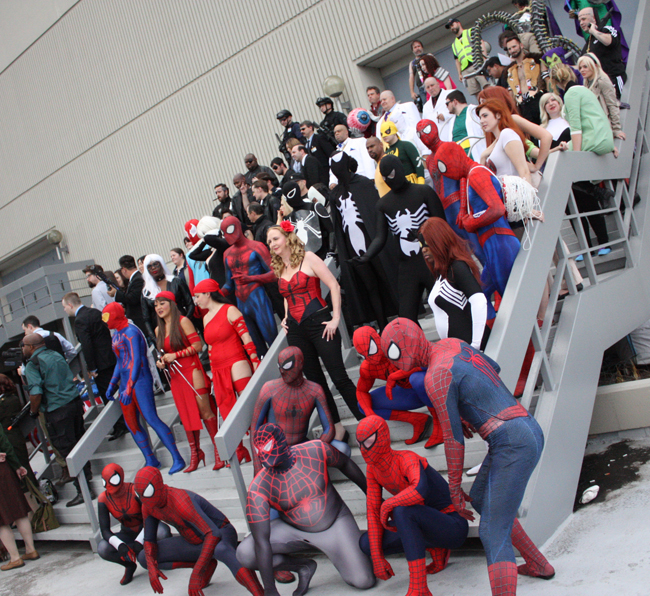 Basically the whole Spider-family. And holy crap, that is one super ripped Spider-Man. 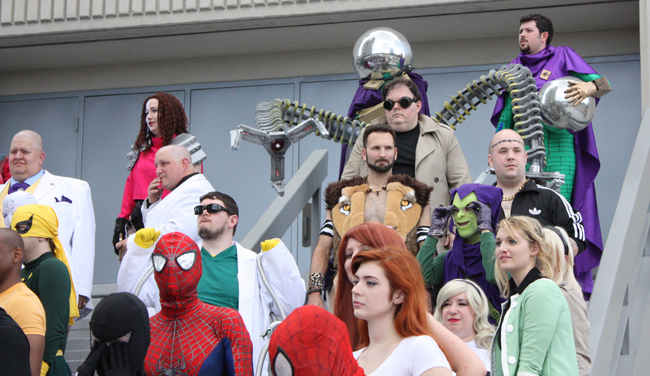 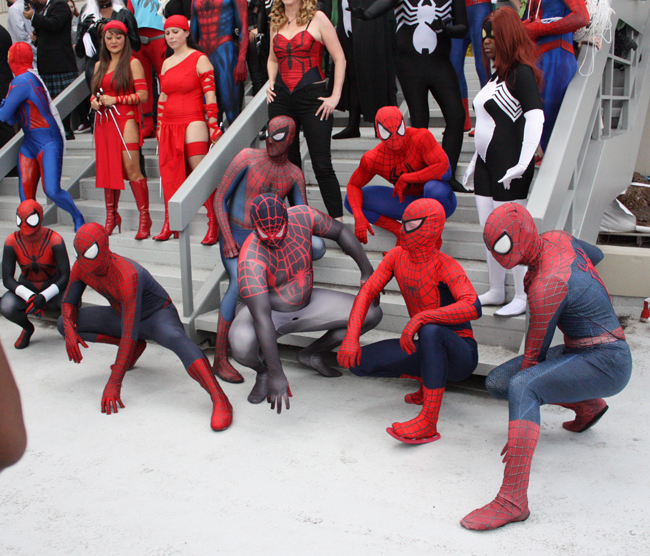 Here are Mystique and Gamora (I asked to make sure) committing genre treason by hanging out with DC characters. 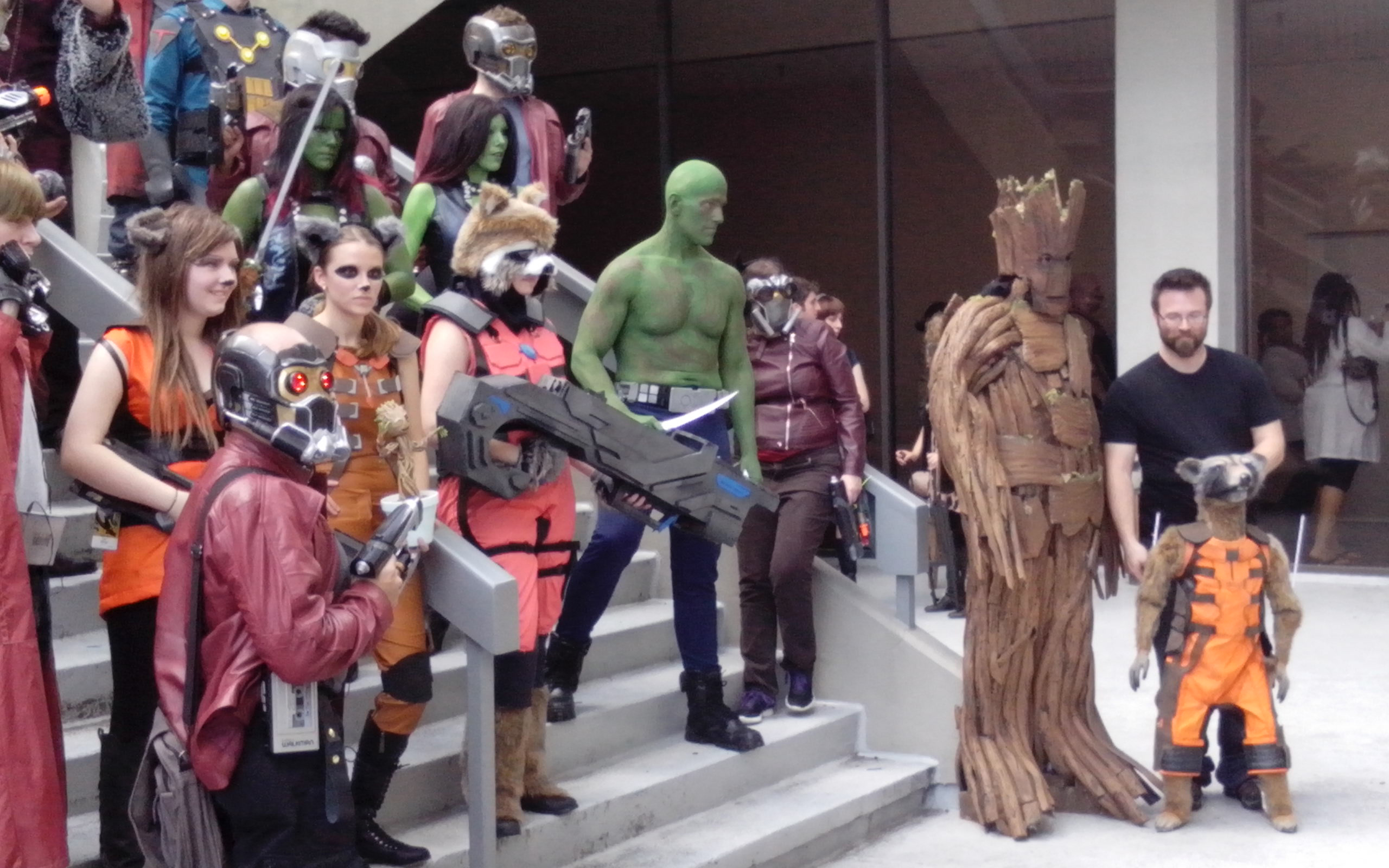 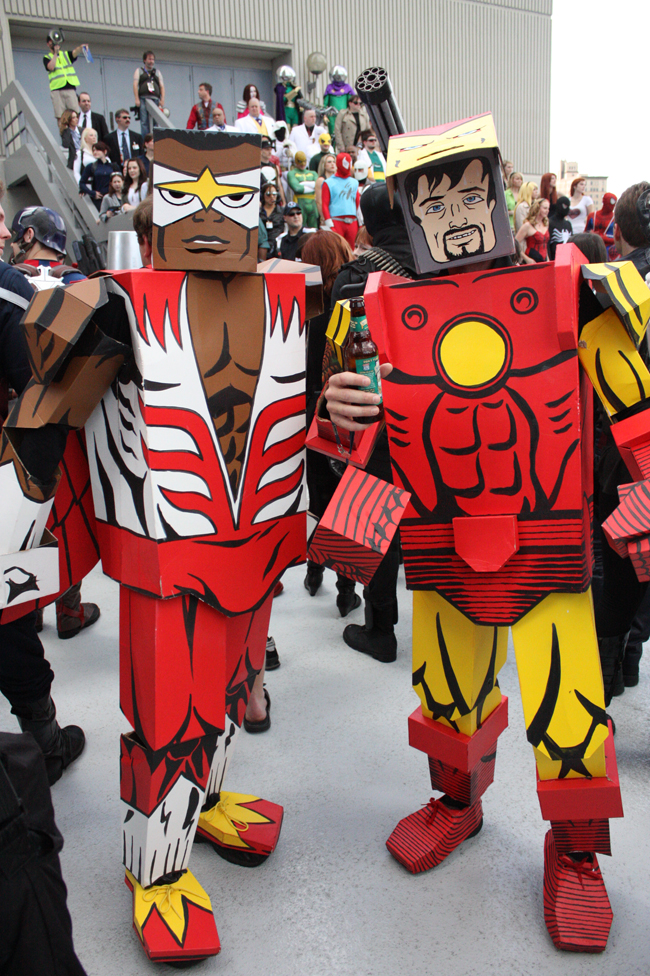 I can’t get enough of The Box Heroes, and neither should you. 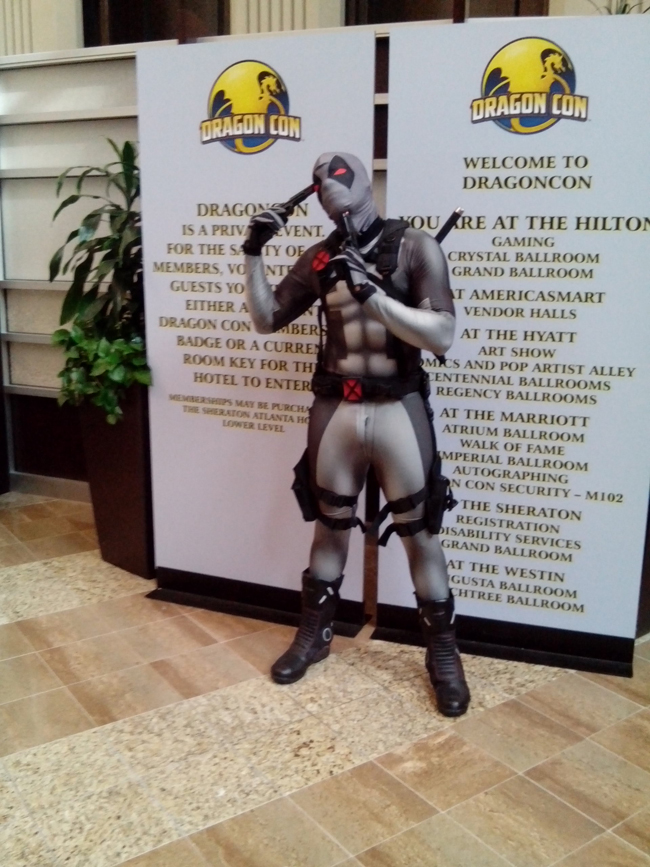 This is Kriss from The Sirk Show 247 as the Xforce version of Deadpool. 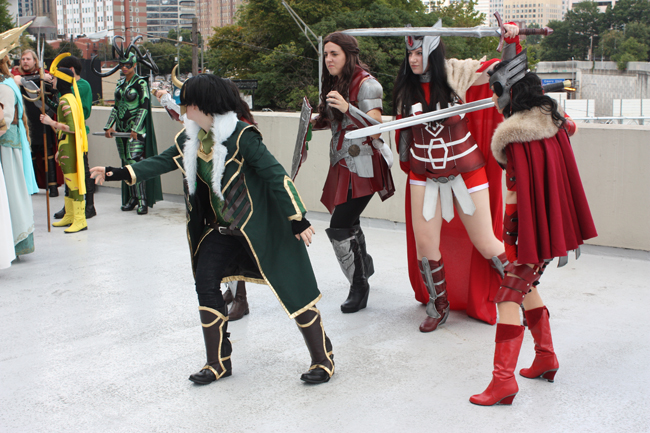 More from the Thor-family shoot. Swordfight! 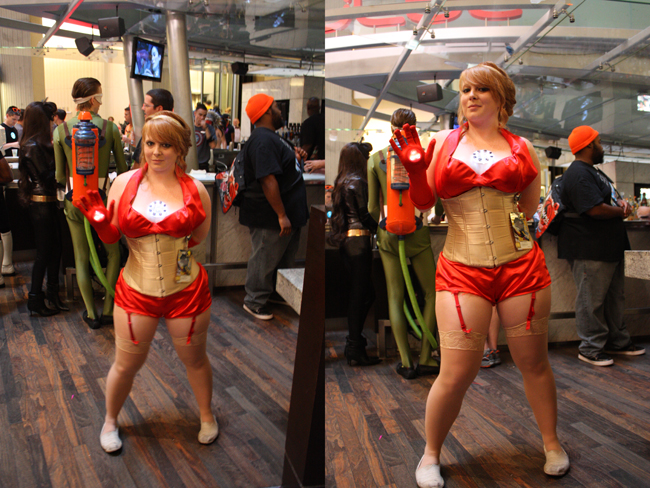 Oh, no big deal, just a burlesque Iron Man doing her thing in the most awesome way. 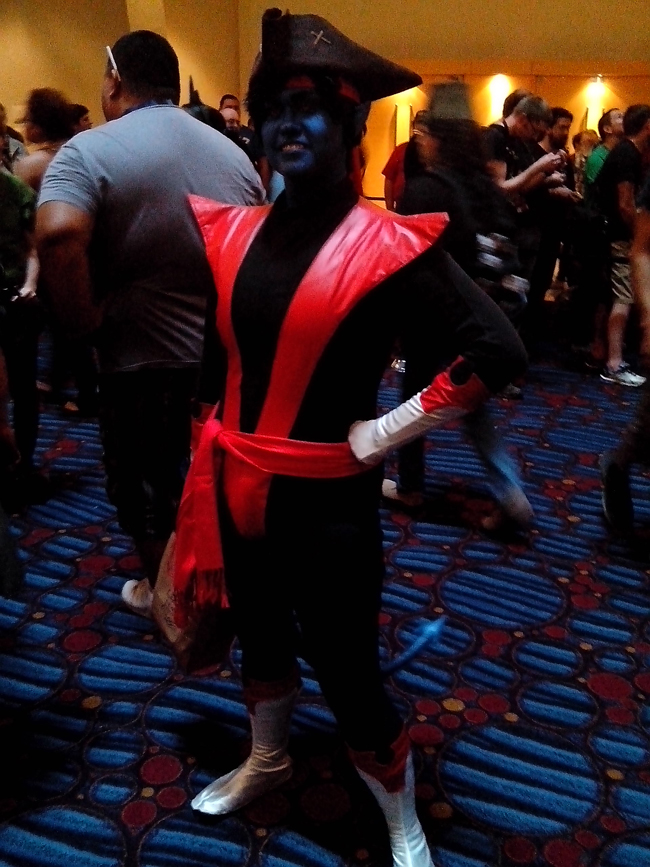 [strike]It’s the Dread Pirate Bluetail (I think. It was loud and she was in a hurry.)[/stike] Actually this is Nightcrawler’s Danger Room outfit; thanks to commenter Queen Michael for solving this one. 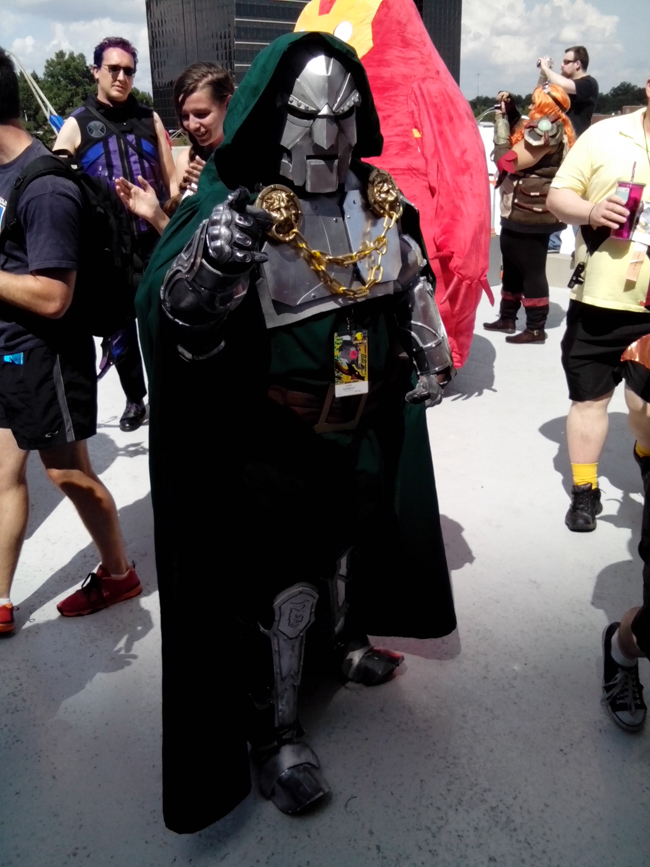 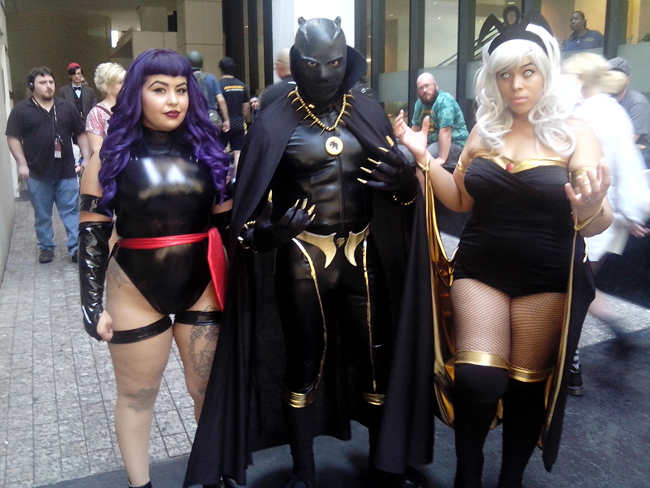 Another entry from our Dragoncon 2014 day one cosplay gallery, here’s ​Monica as Psylocke, Jamel as Black Panther, and Sylvia as Storm. 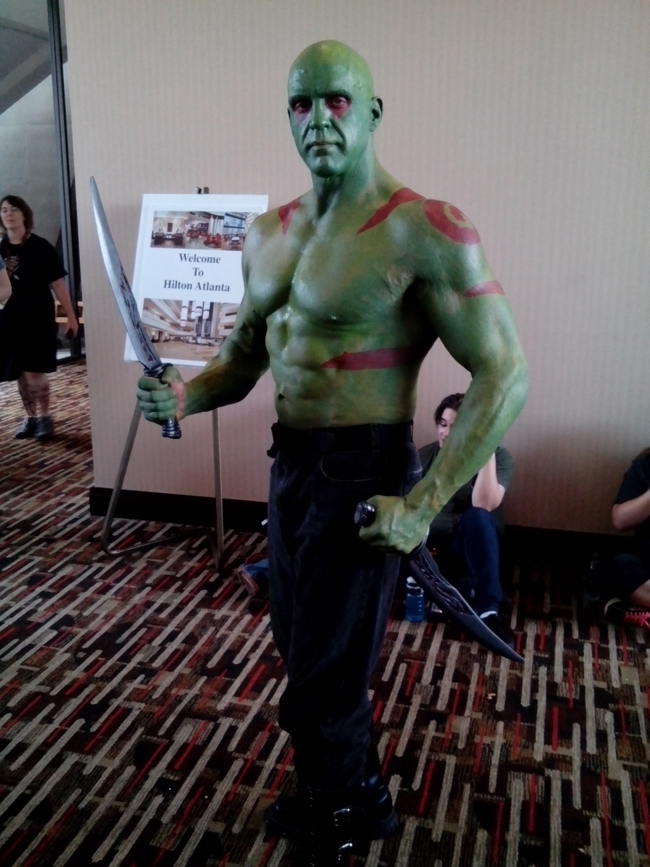 The makeup is amazing, the abs are real, and I’m feeling both lazy and fat looking at this buff as hell Drax cosplayer. 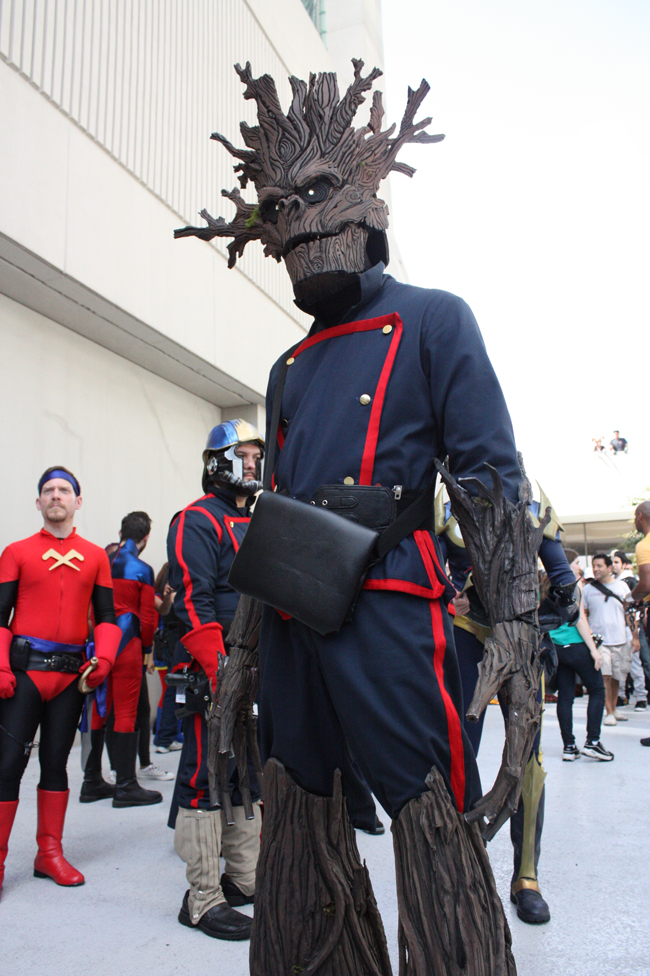 Another look at that awesome Groot, this time so you can compare/contrast with the next image. 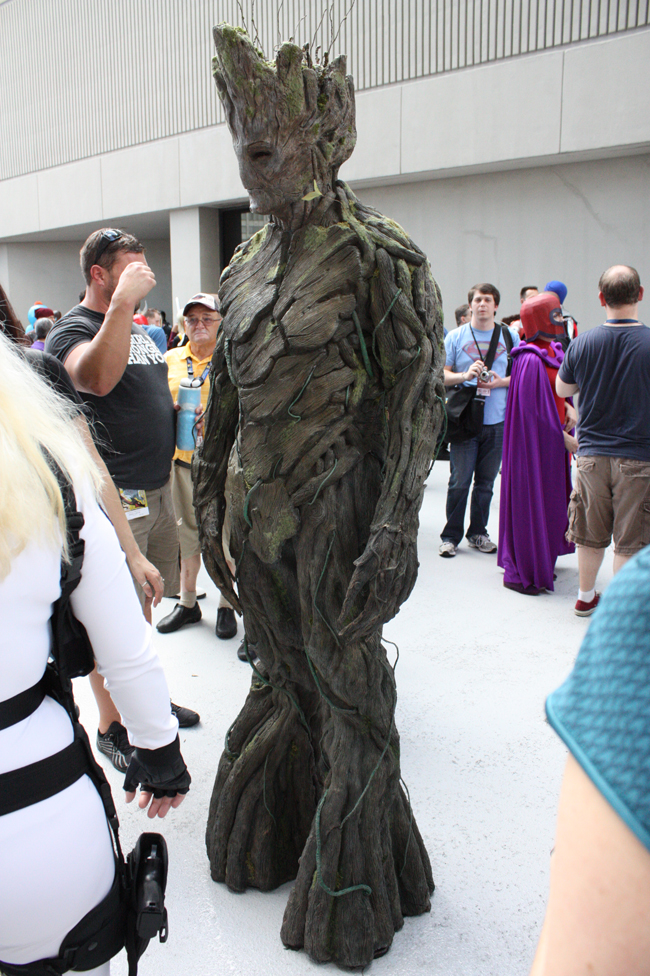 It was so hot this guy had difficulty talking. But holy crap what a costume, right? 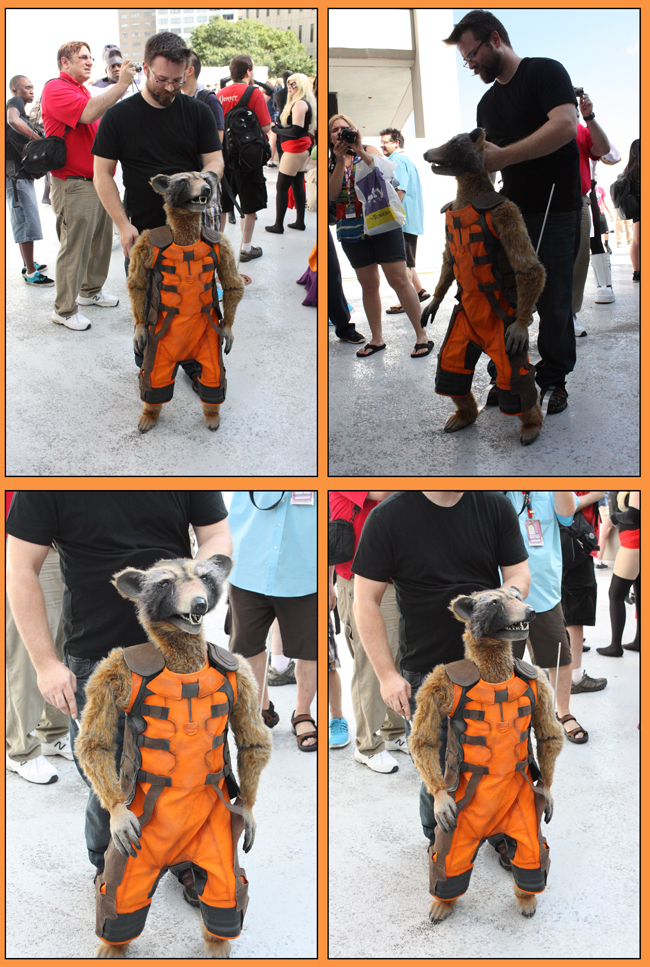 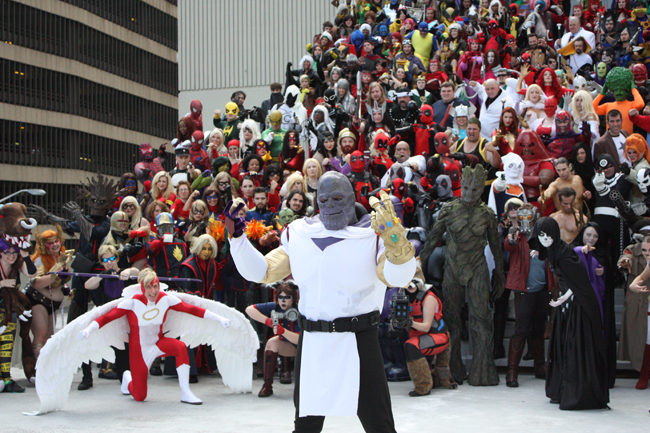 And finally, we close with Thanos, menacing the Marvel universe.