Developed by Access Games. Published by Square Enix. Released May 20. Available on PS3. 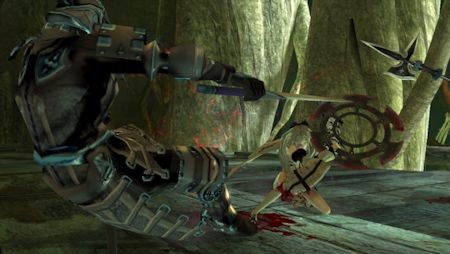 Zero is an intoner, one of six numerically named sisters with the ability to sing powerful forces into being. She wants to kill her sisters to become the strongest being in the world, and she also has a dragon that urinates compulsively. After killing women, she takes their men and has sex with them, she has a flower that’s sticking out of one eye that lets her regrow her limbs, and her arm falls off but she uses a parasite to keep it attached.

She’s sadistic and genocidal, she’s abusive towards her only companions. She is also the player character, and this is one of the stupidest videogames I’ve ever played.

Damn it … it made me laugh.

There’s something about this game that is impossible to hate. It is crude, both in terms of gameplay and humor, yet it carries with it a total sincerity, a sheer love of its own creative insanity that I can’t help respecting. While an old man on stilts declares that he can’t function without “booty in the morning,” and Zero complains about receiving experience points for mundane tasks, this third Drakengard goes out of its way to subvert expectations and lampoon itself at every opportunity. For a game about mindlessly slashing at everything onscreen, Drakengard 3 never fails to surprise.

Like previous Drakengard installments, the meat of the experience is found in slicing up hordes of vulnerable enemies in a fashion similar to Dynasty Warriors. Over the course of the game, Zero will gain access to four weapon types that can be switched on the fly – swords, spears, gauntlets and chakrams – of which there are many different flavors with their own unique attacks. Weapons can be upgraded using gold and materials, gaining more moves and attack power as they level.

Most levels consist of Zero running from point A to point B, taking out the Intoners’ armies as she does. Regular soldiers are backed up by annoying archers and giant-sized enemies that can take and dish out a ton of punishment. Every now and then, there may be a platforming section, but the majority of the action is focused on bloody murder (with emphasis on the bloody). 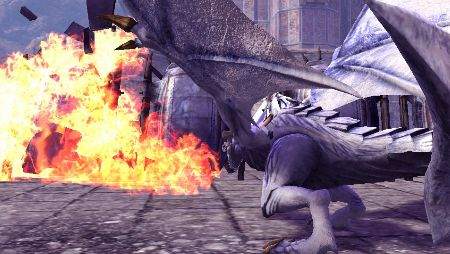 The action is somewhat messy, and I’m not just talking about all the spilled bodily fluids. Locking onto enemies is unreliable, the combat itself is so chaotic that it’s often hard to follow, and the camera is prone to spasming wildly and making it impossible to see what’s going on. Even so, there’s a perverse joy to be had in slaughtering thousands of enemies, especially when those enemies keep yelling in fear about what a monster Zero is. It’s made quite clear that what you’re doing is far from heroic, and the sheer amorality of it only adds to how darkly humorous the whole affair is.

As with previous games, the hack n’ slash combat is broken up by segments in which players control a dragon. At various points, Zero will ride her leathery companion Mikhail, who can fly around the map, hurl fireballs at opponents, and slam into them. These sections are not particularly enthralling, which is a shame because all the major boss battles revolve around dragon combat. Shooting fireballs is finger-numbingly repetitive, while the slam attack suffers from poor targeting where successfully hitting even a locked-on enemy feels random.

I can’t emphasize enough what a mess this game is, because that makes how fun it winds up being all the more impressive. Collision detection is a problem. The enemy forces are littered with absolutely annoying opponents, such as spearmen who send Zero flying or cannons that constantly rain fire. The AI of both opponents and Zero’s allied disciples – the aforementioned men she steals and then bangs – is a joke. Yet the more I played it, the more it grew on me, the more I laughed, and the more I “got” it. This game is anarchy. It knows this, it embraces it, and it has fun with it – fun that manages to be infectious.

One thing I really like about Drakengard 3 is how it turns the usual portrayal of sexuality in games on its head. With her skimpy dress and more than a few camera angles directed at boob-level, Zero is a highly sexualized character, but she is no mere object. Her sexuality is something she owns – quite aggressively in fact – and it’s actually the male characters who are objectified and turned into sexual stereotypes. Whether it’s the horny old man or the masochist who gets off on the slightest of discomforts, a lot of the humor is derived from the way Zero’s disciples take and seek out abuse. It’s rare to see a female character in games display any sexual agency of her own, and even rarer to see a female protagonist actively seeking men for sex. It is a refreshing turn of events, at any rate, and one of the many subversions perpetuated by this consistently oddball title.

As well as the main campaign, there are challenge missions to be undertaken, though between the aggravating combination of annoying enemies and strict arbitrary time limits, I found myself getting too annoyed with them to play for very long. At launch, optional costumes can be purchased as DLC, which I find rather gauche, though nowhere near as bad as the fact that a Japanese voice option costs $4.99. Come on, Square Enix!

If one were to view this objectively, one could not call it a good game by any stretch of logic. Fortunately, despite what some proles think, an objective review is a silly thing, and I can therefore take exactly how this game made me feel into account. Yes, at times it made me feel flustered and pissed off with how near-broken it can sometimes be. A lot of the time, however, it made me feel exhilarated as I slaughtered waves of panicking soldiers, and it made me feel hugely entertained by its endless stream of jokes and nonsense.

Boy, but that dragon can be annoyingly whiny. No wonder Zero hates him.

Bottom Line: A hot mess of gibberish that still manages to be vastly amusing, Drakengard 3 is as close to Deadly Premonition as a hack n’ slash game gets. It’s bizarre and it’s disheveled to the point of downright idiocy, but it knows what it is and it goes the whole hog. I laughed, anyway.

Recommendation: Hard to recommend to most people, really, but if you can forgive a lot of problems and have a love for the bizarre, you may just fall in love with it.