It really did take me completely by surprise that I enjoyed Driver San Francisco so much. It just goes to confirm my oft-repeated philosophy that you should give everything a chance to surprise you. Within reason, I mean. As long as you get all your games for free like I do. What it should be applauded for if nothing else is that it took a risk, which is very sadly rare in a big-money industry. A risk on a slightly weird gameplay gimmick with the quantum-leap body-hopping that paid off quite handsomely. It’s not like the destructible terrain in Red Faction Armageddon, a gimmick that’s just kind of there, but a gimmick that enhances the core mechanics, driving games being all about speed and a fast flowing pace.

But before any of you capitalist bean-counters out there start thinking about ripping off D:SF‘s gimmick to spice up your own future driving game properties, you should be aware that it’s not just that aspect that makes the game good. It could very easily have been mishandled, but what carries it over the finish line is that it’s also a very strongly written game.

Yes, it’s silly. Very silly. As I said there’s a very Starsky and Hutch “cop show for all the family” feel to the action, characters and dialogue, right down to the split screens, weird camera angles, elaborate superimposed credits and funky soundtrack. The element of magical realism with the quantum leaping makes it double goofy in the vein of that very unique experimental aspect of American television that produces things like Baywatch Nights or My Mother The Car. Or indeed Quantum Leap.

But while it’s silly, what’s important is that it stays consistently silly. It maintains the same tone from start to finish. It never becomes morbid or juvenile, like it could very easily have been if it were possible to fatally run over pedestrians. There is nothing about the goofy daytime TV vibe or the perceived personalities of the characters that didn’t come across as completely intentional on the part of the writers. They set out to make a game with the feel of a fun, light-hearted action-adventure show and that’s exactly what it has. The important word to pick out there is “fun.” It is very fun. And surely, for a game, that’s all you need to say.

What makes it a well-written game rather than merely a well-written story or well-directed movie is that it’s not afraid to draw attention to its gameplay mechanics. Tanner is justifiably thrown when he first acquires the ability to leap into someone’s body, and we get to see him gradually learn to understand his power and realize the potential. It’s an arc very similar to one we see in Bill Murray’s character in the first half of Groundhog Day. At the same time, in gameplay, the body-hopping mechanics gradually expand and gain new features until you can astrally project high above the city and possess any vehicle. So the player gets to have an arc of their own. What makes a protagonist engaging is when his reactions reflect the player’s, and after the initial confusion Tanner’s clearly having as much fun as we are. It’s a stark contrast to games like Darksiders where the main character has the same permanent angry grimace whether he’s pirouetting around the battlefield or being informed of his mother’s breast cancer. 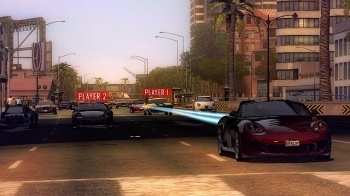 Another enjoyable instance of mechanics writing the story is when Tanner attempts to chase the baddie of the moment outside the sandbox map, and finds a glowing red haze blocking the road. So he has to turn around and come up with an excuse for why he can’t continue that makes his partner think he’s off his head, which may very well be the case. On the one hand, the boundary is necessary in any game world as long as you’re not procedurally generating the entire planet Minecraft-style, but by drawing attention to it in the story it also illustrates that Tanner is trapped inside a pocket reality of his own creation, and part of his arc is going to be finding a way to escape.

Now, the subject of dialogue in games is something I’ve harbored for a long time as a potential topic for Extra Punctuation. I was thinking of doing a sort of gameplay dialogue dos-and-don’ts, but my problem is I only have one big “don’t” that I can’t really pad out into a full column. It’s a “don’t” I’ve had simmering since doing Spider-Man Shattered Dimensions, and here it is: don’t, in encounters with characters, randomly play one of four or five lines of dialogue over and over again every few seconds. No matter how funny your mum thinks the lines are. This is very, very annoying.

Fortunately, wily old Driver: San Francisco anticipated my article and implemented the very thing I was planning to recommend as the best alternative: have your four or five dialogue exchanges, but execute them in a predetermined order at predetermined points in the encounter. Yes, randomly selected lines might seem more organic, but this is dialogue, dialogue is linear by nature, get over it. It’s also an opportunity to tell little sub-stories in the back-and-forth interactions to develop the characters. You could even do the Bionic Commando thing where there’s a button for telling the boss character to shut the fuck up.

The objective is to not let the player hear the same dialogue twice, because no witticism in the history of the world has ever improved under such conditions. Yes, if the player dies and has to restart they’re going to hear it again, but honestly they’ve got no right to expect anything else at that point. I know Grand Theft Auto 4 and its various elaborations had several alternative conversations that could play on your way to each mission or encounter, but I think it’s possible to do too much. That might potentially cause players to want to fail so they can hear every possible dialogue, and you don’t want to reward failure, that’s exactly what’s wrong with reality television.

Oh, I know the usual argument. How can dialogue possibly be important in a game that’s supposed to be about, say, street racing and making sweet jumps? But when you think about it, it’s even more important for establishing characters when no-one gets out of their cars and all you ever see of them is a tinted windscreen. Without character there’s no motivation, and without motivation there’s no engagement. Driver SF understood that and that’s what’s gratifying.

Hm, I’ve been too nice to games lately. Perhaps I’m getting old. Or perhaps all my hard work is paying off and they really are getting better. Oh, wait. Dead Island.