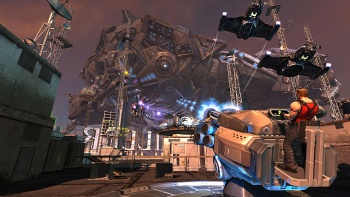 Sad news, children; the industry’s longest running joke is coming to an end. After over a decade of anticipation, speculation, frustration, and then outright condemnation, Duke Nukem Forever is actually going to be released. Earlier this week, 2K Games and Gearbox invited us to a Las Vegas strip club (yes, really) to play through the first 90 minutes of the game. This was a “warts and all” presentation of the game, with no scripted trickery to hide the rough edges and no skipping past the boring bits. No, we started at the very beginning of the game and played through to the first massive boss — or in my case, until a scripting error stopped my progress before the final level of the demo.

Gearbox President Randy Pitchford, who got his start working at 3D Realms, kicked off the evening by explaining his company’s goal was merely to finish the work 3D Realms started. In fact, of the 15 people listed in the credits of Duke’s famous 2001 trailer, 14 were already working at Gearbox when 3D Realms cancelled the game. Pitchford explained that Duke Nukem is still 3D Realms’ game and that Gearbox was stepping in simply to finish the game and get it out the door. But the proof of the pudding is in the eating, so after these introductory remarks, we fired up the game and tried it for ourselves.

Fittingly, the opening scene has Duke pissing in a urinal in a fully interactive sequence before heading out to battle a massive Cycloid in a huge stadium. It’s a call back to the previous game and nicely sets the tone for Duke Nukem Forever‘s self-referential tone. The sequel not only pays homage to the original game and comments on the numerous delays, but also makes more than a few allusions to today’s most popular shooter franchises and most overused conventions.

After winning the battle against the Cycloid, the camera pulls back to reveal that Duke is actually playing a game based on his own adventures from twelve years ago. In the interim he’s leveraged his status as the savior of the entire world into a massive commercial empire complete with his own Las Vegas casino and fancy penthouse apartment filled with gold statues, pools, and nymphomaniac twins.

Since indulging in this decadent daydream wouldn’t make for a fitting follow-up to the previous game, a few complications soon enter Duke’s world. For one thing, the aliens are back, and have agreed to a pact of non-violence with the US President. When Duke’s suspicions of the Cycloid Emperor’s true motives threaten the new diplomatic détente, the President orders Duke to stay out of the picture. Meanwhile, the aliens continue to land on and around Las Vegas and Duke’s casino, the Lady Killer. Are the aliens really trying to be peaceful this time or are they just setting us up for a treacherous sneak attack? In case the ambiguity is too much for you to bear, Duke lets us off the hook with a thoroughly unsurprising, “I’ve got a bad feeling about this.”

Though it’s not entirely obvious from the start (but not nearly so vague as to warrant a spoiler tag), the aliens actually do have some horrible plans in mind. They want to steal all of our chicks and use them to populate a new planet. Since the casual sexploitation of women is Duke’s thing, he’s not about to let some extraterrestrial race of Cycloids start stepping on his turf. Pitchford explains that this plot synopsis just “scratches the surface” of the story, which is a strange thing to say about a character who is so unapologetically and intentionally one-dimensional. For the record, I do not think I mean that as a criticism. 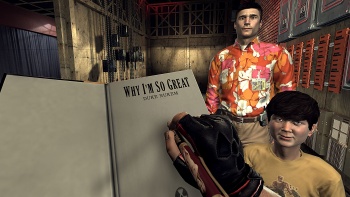 After completing the final battle in his own videogame, Duke starts to confront the current Cycloid menace. I get the feeling that the first part of the game is intentionally mundane, at least as far as the gameplay goes. I mean, Duke’s empire is obviously prosperous and the Duke brand is plastered over every surface in the game, but the actual gameplay for the first several minutes seems limited to turning faucets on and off, making popcorn, and signing autographs. It’s not exactly Heavy Rain and it doesn’t seem to have much direct effect on the actual gameplay, but it’s nice to find little bits of interactivity in the world. It’s also not so bad to punch out an unidentified-but-obviously-recognizable actor behind the scenes of a familiar-but-legally-indistinct late night talk show.

One of the coolest touches in the game is the Ego meter. Rather than having an actual physical shield like most of today’s heroes, Duke is protected by the sheer force of his masculine self-image. When enemies beat him down, he has to pause to regain his confidence or else face the real possibility of actually being killed. While it’s functionally the same as similar mechanisms in other games, the clever ways the designers find for Duke to increase his Ego are what sells it for me. He might, for instance, get an Ego boost from lifting weights, or from admiring himself in mirrors. Of course, Duke also gets drunk off of only one beer, which hardly seems to fit the manly ideal the designers were going for.

As Duke makes his way through his casino, he’ll punch, shoot, and otherwise disembowel every Cycloid, Pigcop and miscellaneous beastie who comes his way. I won’t spoil any of the specifics of the story or the gameplay here, because much of the appeal is in discovering the unique interactions and secrets the designers have hidden throughout the levels. Some sequences, like crawling through ducts or gathering power cells for a reactor, are laughably old-fashioned. Others, like exploring the casino as an action-figure sized Duke complete with a drivable RC car, are fresh, funny, and, most importantly, fun.

So even though the game’s release will finally put an end to all the “Did Not Finish” mockery, there is still some potential for ridicule lingering around the edges of this frustrated adolescent fantasy. It is a game that will already be nostalgic for itself on the very day it comes out. Whether its retro-approach will feel like a refreshing resurgence of past glories or merely the ragged remnants of an outdated design remains to be seen. Whatever you think of the game’s tone, it has a high bar to clear in terms of anticipation. As Duke himself says when asked if the game is any good, “After twelve f***ing years, it should be.” It’s a bold statement to put right in the game and we’ll all have a chance to see whether it’s true or not when the game is released this May.

PlayStation Plus Subscriptions Actually Catching On