As many of my correspondents have been quick to remind me with insufferable glee, the big story of this year’s PAX was the announcement that Duke Nukem Forever is alive and kicking, penciled in for release in 2011 and being completed, courtesy of none other than Gearbox Software. Most will know them as the developers of Borderlands, although they started out as the developers of official expansion packs for Half-Life, such as Opposing Force and Blue Shift, and to me will always be “those guys who lived off Valve’s run-offs.”

This is a little embarrassing for me, because when 3D Realms fell I prematurely acted on the assumption that the game would never see the light of day, and created a mock review of Duke Nukem Forever from the perspective of a parallel universe where the game was released and actually was the kind of thing you’d reasonably expect from a game that took twelve years to make. The review coincidentally (almost suspiciously) was recently voted the best ZP of all time (and, personally, I’m disappointed Wolfenstein didn’t make it out the starting gates). So now that it seems DNF might actually be released in some form I’m going to end up having to do another review, called “Duke Nukem Forever (The Real One),” which will completely fuck up everyone’s filing systems.

But I stand by the point of my joke review, and the point I made more overtly way back in my GDC ’08 videos: There is absolutely nothing the developers can put out that will be in the slightest bit worth the wait. The advantage of vaporware, after all, is that you can never be disappointed by it. Hype and anticipation is like Schroedinger’s Cat; everything’s fine until the subject actually gets released and then the waveform collapses. Nothing can possibly improve upon what your imagination furnishes, with the obvious exception of Silent Hill 2.

Having said that, I’ve got to admit that my feelings for Duke Nukem Forever have changed. They’ve changed almost constantly throughout the last decade – through anticipation, indifference, hatred, mockery, pity, mockery again, pity again, and recently to hatred again just in time for that video I made. For the longest time, my main point against it was that Duke Nukem is a dinosaur – a representative of an age long past, when people liked overly-macho self-assured 90s misogynistic action men in lead roles, decidedly out of place in the modern climate of grim, gritty, morally questionable protagonists.

But now I feel differently. Things have come full circle. Making my most recent video has made this all very clear to me: silly 90s style action shooters are something we desperately need back. Quickly, please. Because the alternative is more hideous, grimy, ditchwater dull piles of putrid elephant guts like Kane and Lynch 2: Dog Days.

I am so fucking sick of realistic cover-based combat. Not that I think there’s anything wrong with it as a gameplay mechanic. It does the job. It creates an adequate system of offense, defense and evasion. But it’s also boring and routine, always coming down to the same thing: waiting for a guy fifty yards away to stand up, then aiming squarely at his position until he does it again enough times for one of your shots to hit the mark. Half the time you’re just trading shots, hoping your mutant healing factor will outlast his unsecured cardboard helmet. And so many games have it now it’s like having to hear the same lecture delivered by a new professor every bloody week. 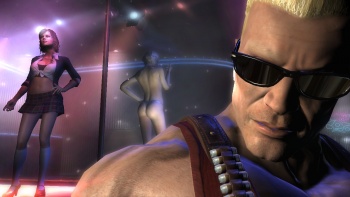 As I said in the Kane & Lynch 2 video, cover combat can’t carry a game by itself. Even Gears of War, the game that arguably brought cover combat into common use, spiced it up with vehicle sections, big boss fights, and if you ever got really bored of jack-in-the-box pop-up shooting galleries you can always sprint over to your sparring partner and saw him in half lengthways with that ridiculous bayonet thing.

At this time it’s worth taking a step back and remembering what sort of defensive gameplay shooters had before taking cover became mandatory. Well, the simple answer is that the main character’s movement speed was always fast enough to pop out of cover, take pot-shots and pop back before the return fire arrived. And that’s certainly something that characterizes cover-based games these days. The protagonists tend to be the kind of slow-moving ponderous fatties who actually need to have a nice sit down behind a chest-high wall now and then. Okay, so it wasn’t exactly realistic that the DOOM marine could sprint at sixty miles per hour, but the decision of “realism or fun” is one that occurs frequently in game development, and in the vast majority of cases you would be well advised to take the second option.

What there are far too little of these days are those uncomplicated DOOM-likes, under which heading I place Serious Sam and Painkiller, both cathartic favorites of mine. Where you didn’t wait behind a wall point-and-clicking on tiny moving objects on the other side of a warehouse until it was safe to come out; where you ran around in the open having a good time. Getting a good look at the overblown monster design, weaving between slow-moving projectiles, standing your ground before a Syrian Werebull and pounding two shotgun shells into its face in the instant before impact. Compared to those experiences, cover-based shooters barely qualify for the title of “action game.” They’re more like those weird Where’s Wally-style games housewives play, where all you do is click on specific objects, only without all the detail, and with muzzle flashes giving me a headache all the time.

I honestly can’t say Duke Nukem Forever bodes well for me. 3D Realms were only really proven by Duke Nukem 3D, and that was back when dinosaurs ruled the Earth. And an unfinished game being completed by a different studio has almost never ended well – these are the circumstances that brought us Wet. But here’s the deal I’m prepared to make, Duke Nukem Forever. Let’s wipe the slate clean. Fresh start. I’ll forget about thirteen years of faffing around, and you forget about that one video that the audience thought was the funniest I’ve ever done. Just please, please, let me feel the wind on my face, rather than the side of a wall. Or tits. Tits on my face would be good too.