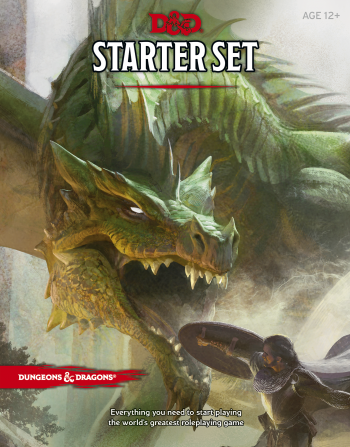 As the first step into the new Dungeons & Dragons there’s a lot riding on the brand new Dungeons & Dragons Starter Set box – and it delivers. It’s a solid entry into the franchise’s sometimes troubled recent attempts at intro products, with a price point that’s hard to beat and comprehensible rules clearly designed for new players to grasp quickly. Introductory products are hard – they have to straddle quality, price, fidelity, and approachability. They need to remain true to the rules while being easy to learn. They need to provide a good representation of what the product line is like while remaining an impulse buy. The D&D Starter Set does this well, with rules that can be grasped quickly balanced by a price that’s hard to argue with. While it’s not perfect, and there are some reservations that keep it from being the greatest in its field, it’s a good portent of a fun game to come.

The set is two booklets, a set of dice, and five pre-printed characters on a fairly heavy paper – all in a pretty sturdy box that could sit alongside books on a shelf, but probably shouldn’t be stacked with heavy board games. The booklets are glossy, full color and a tough stock, but are bound with heavy staples – so they’re not going to last forever. The booklets themselves are 64 pages for the adventure and 32 for the rules. It sells for the reasonable price of $20. The set isn’t a ultra-high-quality premium product made from expensive materials, and it’s clear it’s not meant to be. The emphasis of the value is on the content, which bears up under play. It took my group of four experienced players about 20 hours – five four hour sessions – to complete the adventure. 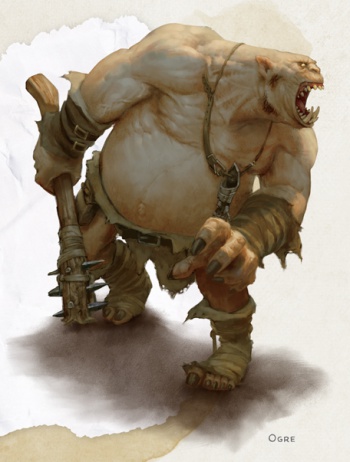 Learning how to play the game from the starter set is a fairly straightforward experience, with the rules laid out clearly in a style that will be familiar to those who’ve played more recent high-quality roleplaying games. There’s an emphasis on a writing style that makes the game easy to understand and rules clear. That’s hampered by the text’s lack of examples of play, which will probably leave new players with zero prior time with video or tabletop roleplaying games with a slightly harder experience learning to play the game. That’s hard to identify as a real problem, though – how many people coming into this game are going to have absolutely zero idea of how to play? Nonetheless, a “How to Play” video from Wizards of the Coast would take big steps to solving that problem – but seeing no reference to that in the game text, it’s not an immediately useful resource if it does appear on general release.

The rules themselves are an excellent implementation. They’re straightforward and fairly easily comprehensible. Gone are the delineated Move, Minor, and Standard actions on each turn, replaced with a simple Move and Action system that will be very familiar to players of D&D prior to 2008. The game’s math is simpler again, with only a few modifiers being added to most rolls, and very few of those relying on things external to the character or monster and therefore requiring an extra step of thought. This is easily the most approachable that D&D has been since the 90s. The advantage and disadvantage mechanics are an absolute treat. Those are used in place of D&D‘s traditional slurry of small modifiers – +1 for high ground, +2 for flanking, and the like – and replace those small acts of math with a bonus d20 rolled alongside the normal throw. You take the higher of your two dice with advantage, or the lower with disadvantage. Easy to understand for new players and, frankly, just damn fun at the table. 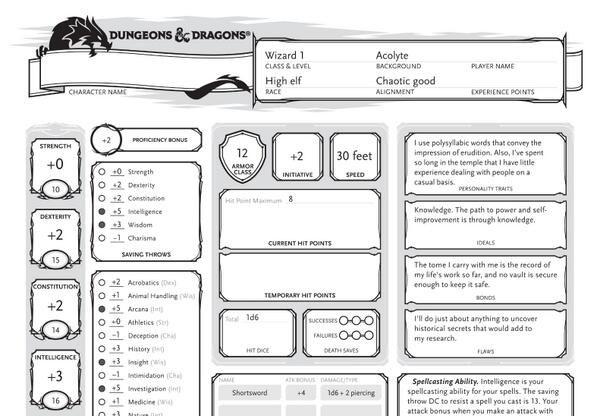 The pregenerated characters are easy to pick up and understand – both in mechanics and backstories – and while I had some misgivings about the suitability of certain characters for new players, I’ve since seen that in play they’re easy enough for players to grasp and roleplay without falling into unproductive stereotypes. Each starter character has a set of personality traits, a background, and motivations that tie them deeply into the adventure. The dwarven cleric, for example, has a cousin intricately tied into the events of the adventure, and the traditional dwarven family and clan ties mean the character is honor bound to help out. The new rate of experience gain and leveling up is well presented, with players getting a quick level after the first and second chunks of play – opening up the mechanical complexity of their characters at an ideal speed not only for roleplaying, but for learning the game as well. I cannot praise it highly enough – at least as presented in this starter set. 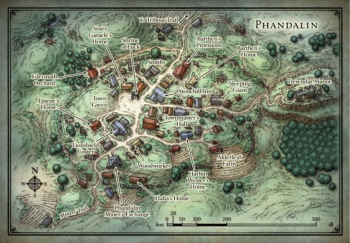 The included adventure clocks in at 64 pages and is a great example of a typical D&D fantasy romp. I approve of it, though it’s not without the same occasional writing pitfalls and lack of thorough descriptive examples that some other parts of the adventure module suffer from. It starts out pleasingly linear then quickly opens up for the players to not only spread their roleplaying wings, but find the kind of nonlinearity and sense of openness that tabletop games are known for. The advice throughout slowly scales up the complexity of rules interaction for the new Dungeon Master, at first simply giving you lump experience sums for the players and then later teaching you to do the math yourself.

Sadly, not every part of the adventure follows that same philosophy – once you’re into the third chapter the game’s clearly done giving you too much advice on how to run your fights and social encounters. Abruptly in the fourth chapter, though, there’s thorough descriptions for every encounter again. While some of that could be chalked up to the nature of the third chapter’s encounters, it’s going to be rather jarring for new Dungeon Masters. The adventure is clearly designed for about four or five players, and with less than four a Dungeon Master is going to have to do a bit of adjusting in the encounters. There are no guidelines for that included – a gross oversight.

Oh, and one thing that’s an absolute crime: There’s absolutely beautiful maps and illustrations of various points in the adventure, but no way to show them off to the players. A poster map of the region, and maybe the final dungeon, would have been a very wise inclusion. As-is, only the Dungeon Master gets to see them. A real shame – especially since it’s easy to get confused about geography.

Okay, starting here are spoilers for the adventure. I’ll do another line when they’re over 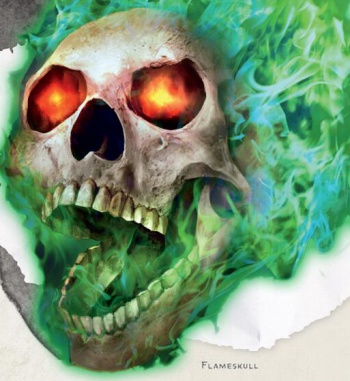 Kicking off with a classic ambush, this is about as archetypal a D&D adventure as you get. While a few plot elements – like the beginning – feel a little generic, the course of the adventure overall is quite nice. There are two strong chapters up front giving players time to learn how their characters act and behave. The third chapter of the adventure is a regional sandbox around the town of Phandalin with a few small dungeons in it, giving players plenty of things to do and helping them learn about self-directing their D&D adventures. A wonderfully crafted web of relationships among the town’s inhabitants and the players’ motives directs characters towards the adventure seeds scattered around the countryside, and those seeds direct players towards. There’s some worry that players will jump the gun and rush towards the adventure’s conclusion – and that could realistically happen. DMs who have worry that will come to pass will have to rewrite appropriately – perhaps moving some key clues to new places so that players need to more thoroughly explore before moving on to the final segment. For most, though, the openness will be a boon rather than a burden.

Perhaps the most interesting of the encounters is the ruined town of Thundertree, which has a druid who can help out the players and a dragon living beneath the town’s tower. Sadly, the town is the most loosely described of all the mapped areas in the module, with very little guidelines as to how the most key encounter – that with the dragon – should proceed. Other than that the Dragon should run away when reduced to low health. This is emblematic of many fights in the adventure’s third chapter, which stand apart from the rest of the adventure because they include only a paragraph at most of combat and roleplaying guidelines for the Dungeon Master.

Pleasingly, there are encounters in the world that have nothing to do with the main plot, like a side adventure involving some orcs and a Red Wizard necromancer. It’s lovely worldbuilding and completely admirable as an example for prospective Dungeon Masters learning from this set.

In true D&D style, the last chapter is a large dungeon complex located in old mines. It has a lot of nooks and crannies, with several rooms having no direct bearing on the ‘story’ of the adventurers in the mine – that’s really fun, and gives players some interesting things to discover. The encounters in the mines with a wraith and a hundred year old magical guardian are really interesting and flavorful, and really steal the show in the last chapter. The fight with the Black Spider – the adventure’s penultimate mastermind villain – will end up boiling down to a fight to the death on sight for most parties of players. It comes off as vaguely anticlimactic.

In the end, this is certainly an above-average way to get introduced to a new game. It’s a taste of the new for veterans and a gateway for newbies. However odd choices like the decision to not include better examples of play, better explain how certain adventure encounters should proceed, and the lack of handouts or poster maps hold the Starter Set back. It’s not the finest starter set for an RPG ever made, but it’s certainly a lot of fun to play and serves as a good taste of things to come. At $20, you’re getting your money’s worth and then some.

Bottom Line: A strong introduction to the new system and the game, the D&D Starter Set didn’t quite blow us away.
Recommendation: If you’re a gamer who has always wanted to D&D, this is the time and place to do it.