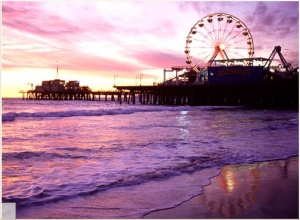 Walking down breezy Ocean Ave in sunny Santa Monica, smelling the salt air, listening to the waves crashing along the beach and enjoying the feel of the warn California sun on my pale skin, it was almost possible to forget that I was in town for a videogame convention. Thankfully the swarms of young men (18-24) clustering around the shuttle bus pick-up and drop-off points, grasping for free water bottles like crows dropping stones in a glass and generally making a nuisance of themselves at local eateries and watering holes was enough to bring me back to reality.

In fact, I couldn’t help wondering how, considering how out of place my colleagues and I were in this quiet seaside resort town, we’d ever be invited back. From blown electrical transformers, trucked-in generators and auxiliary air conditioning systems, closed off airport runways, entire hotels illuminated in Xbox green, a thundering media extravaganza held at the local high school and an entire army of t-shirt clad, pasty white men (and some women) rampaging along the ocean front, madly chasing down taxis and shuttles to make appointment after appointment with far-flung developers, the footprint of E3 was unmistakable. I pity those who were not a part of it, and yet had to endure it anyway. Santa Monica was not expecting this. And frankly, neither were we.

This is how a convention usually works: space is rented in a convention center; meeting rooms and floor space are assigned; local hotels are alerted as to the approximate number of guests expected (many convention centers are ringed by hotels capable of accommodating roughly the exact number of people who can safely fit into the center); and catering, transportation, registration and various other logistical hurdles are hurdled, on-site, by the organizing committee. There’s usually even free Wi-Fi somewhere. Everything under one roof, everything within walking distance.

This is how the new E3 worked: hotel ballrooms, the local civic center, the local high school and a sound stage a few towns over (basically anything with a lot of seats, and a wall outlet) were commandeered for use as press event theaters; whatever large hotel meetings rooms happened to be available, as well as, on occasion, a developer’s own hotel room were set up as demo rooms; and an unused airplane hangar at the Santa Monica municipal airport was set up as exhibition space. What had once all been accomplished under one roof at the spacious Los Angeles Convention Center, was now dispersed amongst a dozen hotels, and airport and Culver Studios. None of which were what one would consider “easy” walking distance.

They said everything would be “easy” walking distance, and, depending on your definition of easy, they might have been right. They also provided shittles. Unfortunately walking ten block and/or waiting for shuttle buses takes time. And time, as anyone who’s attended a conference of any kind knows, and to quote Khan (of Wrath Of fame) is a luxury you simply do not have.

I’ll give you a snapshot of my diary from Wednesday at E3, by way of explanation.

8:00am: Breakfast at the hotel restaurant. Why are breakfast buffets all the same? Bacon, eggs, potatoes and a waffle iron. We ask for the menu and learn there are approximately five different ways this restaurant can serve bacon, eggs and potatoes, all of which cost more than the buffet. Two buffets it is.

8:30am: Registering for the Nintendo Press Event. I’ve already registered with Nintendo via email, but now I must register again. Why? I do not know. In case the person who emailed them was an imposter, perhaps? What happens if my name is not on the list? Will I be ejected? The lady at the desk looks for my name on the sheet – it is not there.

“Could it have been registered by someone else,” she asks.

I give her the name of the person on our team who made the phone call. His name is listed under my registration. The lady smiles, writes in my name in the margins of her sheet and hands me a badge. Apparently the names aren’t that important after all, but they ask you to register twice anyway. I feel like I’m back at the airport. I offer to show her my toiletries, but she declines. At least there’s free water.

10:25am: I skip out on the last few minutes of Miyamoto’s gloating to hit the head before my 350 colleagues storm out of the auditorium and flood the stalls. Glad I did. By the time I’m finished, there’s a line twenty deep for the half dozen or so toilets.

10:30am: In line for the charter bus from Santa Monica to Culver City, for the Sony Press Event. It starts at 11:30am. It’s a half hour away. It’s scheduled to last about 90 minutes, which means it will be over at around 1pm, but I won’t get back until sometime after 1:30pm. My next appointment is at 2pm. I’m having doubts about whether or not I’ll make it. Three hours for a single press conference. This is the new E3.

11:00am: The Sony Three Hour Tour is turning out to be more of a vacation than a press conference. They’re serving drinks. I hope there’s also food.

1:00pm: OK, so the press conference was a waste of time (and full of lies), but at least there’s food. Lots of it. Good thing, too. There isn’t a single restaurant between Culver City and the Fairmont hotel. Yes, I double checked. No, I do not understand it either.

1:55pm: I’m just in time for the EA press conference, which is, largely a waste of time. Unfortunately it’s an entire hour of wasted time, and my next appointment is at 3:00pm, at another hotel – with EA. I skip out on the Rock Band back slapping to catch a shuttle bus the ten blocks or so to the Le Merigot. They’re supposed to run every five minutes. “Supposed” is one of my favorite words.

3:15pm: Still waiting for the shuttle bus. I could have walked there by now.

3:30pm: Checking in for my appointment with EA. They weren’t actually “waiting” for me, it seems. I simply get assigned to the next available handler and walked through the gauntlet of their suite in a group. My group consists of myself and that gal who licked a PSP once. I forget her name. She asks interesting questions. I wonder how it tasted?

4:45pm: I’ve played just about every game they have in here, including Rock Band. The Harmonix PR flak is asking me what I thought of it. I tell her the timing was off. Then she asks me what I thought of the interface. She’s read my Microsoft Event write-up, apparently. I dodge the question and get an invite to their private party. Free booze and fake guitars. This is the first flashback to last year’s E3 of many. I tell her I’m not sure I’ll make it, but thanks anyway.

5:15pm: I’m late to my appointment with Eidos. Thankfully Joe and Dana made it on time and are holding down the fort. Double thankfully, our first session is with FunCom and Conan. I’ve seen it before, and it’s an MMOG, so I really don’t care. But they have great swag, and the beer is cold. Dizzy from one Corona? This is how you know you’re working too hard.

5:45pm: I’ve moved on to IO’s booth to see Kane & Lynch. They weren’t expecting me either (in spite of the fact I registered with them a week ago), but there isn’t exactly a line so they’re still happy to see me. Then their TV dies. So we move to another room. At least the Xbox 360 still works.

6:30pm: Back at the hotel to do some writing and maybe post something before my East Coast audience goes to bed. I’ve been writing for about ten minutes when the power goes out. There is no upside to this.

10:00pm: My cunning plan to fetch dinner while waiting for the power to come back is both a success and a failure. The restaurant at the end of the pier still has power, thankfully, and damn fine margaritas. That’s the good news. The bad news is the power has still not come back on at the hotel.

11:00pm: There are no hotels in Santa Monica with A) available rooms and B) electricity. There are plenty with either, but none with both. I know this because we’ve called them all. I have a two-hour charge in the laptop, and a borrowed Sprint broadband card. Time to get writing.

7:30am: Out of bed. The power has just come back on. My laptop is dead, I didn’t get any sleep and I’m a half-day behind in posting my stories. But at least there’s coffee. Time to start all over.

Final thoughts? Santa Monica is a great town to visit, but I don’t want to work there. Next time the ESA plans a convention, I hope they have the balls to actually make it a convention and not a three-day experiment with the entire press corps and a mid-sized American city as unwitting butts of the joke.

Russ Pitts is an associate editor for The Escapist. His blog can be found at www.falsegravity.com.

Space Siege and Universe at War