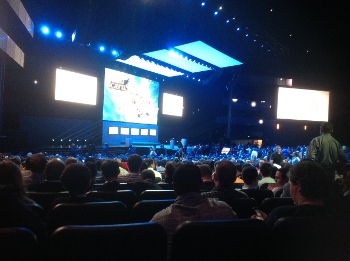 The excitement is usually pretty high at Nintendo’s E3 press conference. It’s the first actual day of E3, and after this, the doors at the Los Angeles Convention Center will burst open and the entire gaming industry will swarm the show floor. Before any of that could happen, though, we needed to find out what Nintendo had to say. The publisher’s pre-E3 video indicated that today’s press conference would focus entirely on the Wii U, so hopes were high for a release date, price, and some technical details about the new console. Sadly, the press conference left a lot of questions unanswered, and raised even more.

The show opened with video of Shigeru Miyamoto in his dressing room, digital Pikmin running amok. As he pulled on his jacket and headed, presumably, to the stage, the Pikmin followed him excitedly. His actual entrance, as always, was met with huge applause. The camera cut to members of the audience, who now also had Pikmin perched on them. It was a fun, playful gesture that had the industry laughing, which I hoped would set the tone for the rest of the show.

Miyamoto quickly switched gears and spoke about the development of the Wii U. He said that Nintendo had started working on it right after the Wii launched, with the intent of giving gamers a console experience that wasn’t dependant on the television. The idea still seems a little odd to me (isn’t that what handhelds are for?), but from what we saw, the tablet-like Wii U GamePad will offer a unique control scheme whether you’re playing alone or with friends. Whether that unique control scheme actually makes gameplay better remains to be seen.

Pikmin 3 was the first Wii U game shown, and the video of the real-time action management game was met with huge applause. Miyamoto discussed struggling to find the correct camera placement when they made the first Pikmin on the Gamecube ten years ago, because they wanted to show off the movement and details of the Pikmin while also highlighting the surrounding environment. With the Wii U’s higher resolution, as well as the map provided by the GamePad, Nintendo can now do both. The reveal ended with a heartwarming moment of Miyamoto playing with a Pikmin plush, which the audience loved.

Miyamoto left the stage, and Nintendo of America President Reggie Fils-Aime made entered, stating that he felt “like a purple Pikmin.” He talked a bit about how Wii U would change the way gamers interacted with each other, as well as with their television, and said that it would have Netflix, Hulu, Youtube, and Amazon Video. Then he said that this press conference wasn’t going to focus on hardware so there would be more time for games. That was worrisome-weren’t we there to hear all about this new console? The promise of seeing 23 Wii U games on stage renewed my excitement, however.

Right after saying that the presser would be all about the games, Reggie proceeded to not talk about games. The Wii U GamePad supports what he called “asymmetric gameplay,” with one player using the GamePad in a solitary role to support or compete against other players. The audience was happy to hear that the Wii U would support two GamePads, though Nintendo only focused on single GamePad challenges this morning.

Then we got another look at the Miiverse, which was first revealed in the Nintendo Direct announcement on Sunday. It looks like an enhanced version of the Wii’s Mii Plaza, and was described as your Wii U’s “Main Street”. Miis strolled the Miiverse, while tiles, which Reggie said would represent gamers’ personal tastes or currently trending entertainment, were scattered throughout. The Mii interaction made the Miiverse look a little deeper than the Mii Plaza, which is great, but it’s hard not to be wary of anything Nintendo does with online gaming. Eventually, gamers will be able to join the Miiverse from their 3DS, PC, smartphones, or other web-enabled devices, so you can always be connected to your Miis-assuming you want to be.

Next up was the obligatory Wii U Mario game, New Super Mario Bros. U. NSMBU will utilize the Miiverse to connect with friends and see what they’re saying, like a social window that opens as you’re playing. The game itself looks awesome, and the audience was clapping and cheering before the trailer ended. Yes, it’s more of the same, but if you love New Super Mario Bros. (which I do), it really looks like a lot of fun. I’m not sure how I feel about a fifth player using the GamePad to help or hinder the other four players during challenges; much like the “coopetition” employed by New Super Mario Bros. Wii, it will probably lead to lots of screamed obscenities and shattered friendships. 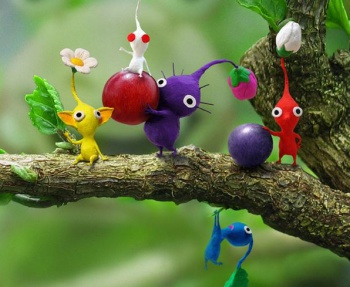 Since Nintendo’s relationship with third-party developers has always been a little shaky, it was great to see some third-party support for the Wii U right away. However, it was hard to get excited about Batman: Arkham City Armored Edition. Arkham City is an amazing game, but by the time the Wii U comes out it will be a year old, and it would have been great to see something brand new instead.

The audience was more excited about Scribblenauts Unlimited , which genuinely seems like a game that could benefit from the unique options offered by the GamePad. Instead of just typing in words and using the objects that appear, players can create their own from scratch. Like a dog car. Or a punk rock dog car. The options are endless! The promise of multiplayer and an in-depth backstory for Maxwell offered more depth than the previous Scribblenauts games, so it was good to see that Scribblenauts Unlimited was more than just a port.

We were given a quick look at some other third-party Wii U games, and the one that received the most cheers was Mass Effect 3. Again, that came out last year, but upcoming titles like Darksiders II and Aliens Colonial Marines will feature Wii U versions as well.

Then the subject shifted to music and fitness games, which lead to the announcement of Wii Fit U. There was a cheesy video of a couple trying to top each other’s burned calories by competing against each other in challenges. The new activities using the balance board and GamePad looked interesting, though, and it would be really nice to have a reason to use my balance board again.

Following Wii Fit U was Sing, which is… a karaoke dancing game, apparently. Reggie was really pleased about the fact that Sing is a music game in which a whole group could participate, because apparently Rock Band doesn’t already do that. We were shown a video of a group of friends singing and dancing to that “Call Me Maybe” song everyone loves so much, and I was completely unconvinced that it was a game anyone needed. That said, it’s got mass appeal, so I can see why Nintendo would want a game like that for their system. And using the GamePad for scrolling lyrics while the rest of the players watch the screen for dance moves could be a great idea.

Executive VP of Sales and Marketing Scott Moffitt was brought onstage to talk about the 3DS for about five minutes (more 3DS news is coming in a separate Nintendo conference later in the week). New Super Mario Bros. 2 was announced, and while I love these games and will undoubtedly buy this one, I really wish they hadn’t dedicated more press conference time to the series when there was so much more they could have shown. Like Animal Crossing. Just saying.

Getting to see Paper Mario: Sticker Star was a treat, though. It was only given a vague “holiday” release window, which isn’t soon enough, but I thought the sticker mechanic offered a cool twist on the simple turn-based combat employed by the series. The audience also loved Luigi’s Mansion: Dark Moon, followed by quick looks at a few other 3DS titles. One of them was a 3DS version of Scribblenauts Unlimited, which kind of negates the idea of the Wii U getting its own unique Scribblenauts.

After shifting gears back to the Wii U, Lego City Undercover was shown off, with the GamePad being used to assist the player in fighting crime. Then Ubisoft CEO Yves Guillemot came onstage for the conference’s most awkward exchange. We got to see another live demo of Dance Central 4, the first being yesterday’s Ubisoft press conference, which features asymmetrical gaming as well. Then Reggie and Yves moved on to ZombiU, which featured possibly the conference’s best moment: using the GamePad, Reggie had his face zombified. “I like French food!” he growled. “I’m coming to eat you!” Ubisoft is going to have a strong Wii U showing, with Assassin’s Creed III, Rabbids Land, Your Shape: Fitness Evolved , and Rayman Legends among the games.

While we watched the Ubisoft video, the stage was set up to look like a theme park, which was to announce Nintendo Land. A virtual theme park featuring characters from some of Nintendo’s biggest franchises, it was compared to Wii Sports-play it and you’ll get it. That sounds fine, provided it’s a pack-in with the Wii U, but that wasn’t confirmed-all Reggie said was that it would launch alongside the console.

The press conference came to a close with no release date, no price, and no real surprises from Nintendo. It was a little disappointing, and it’s hard not to feel wary about the Wii U at this point. However, Nintendo is going to address the press again twice during the week, so hopefully I’ll be proven wrong and we’ll have more news soon. They definitely showed off some games that excited me, but this was Nintendo’s weakest E3 showing in years, and I hope they get their groove back during the show.