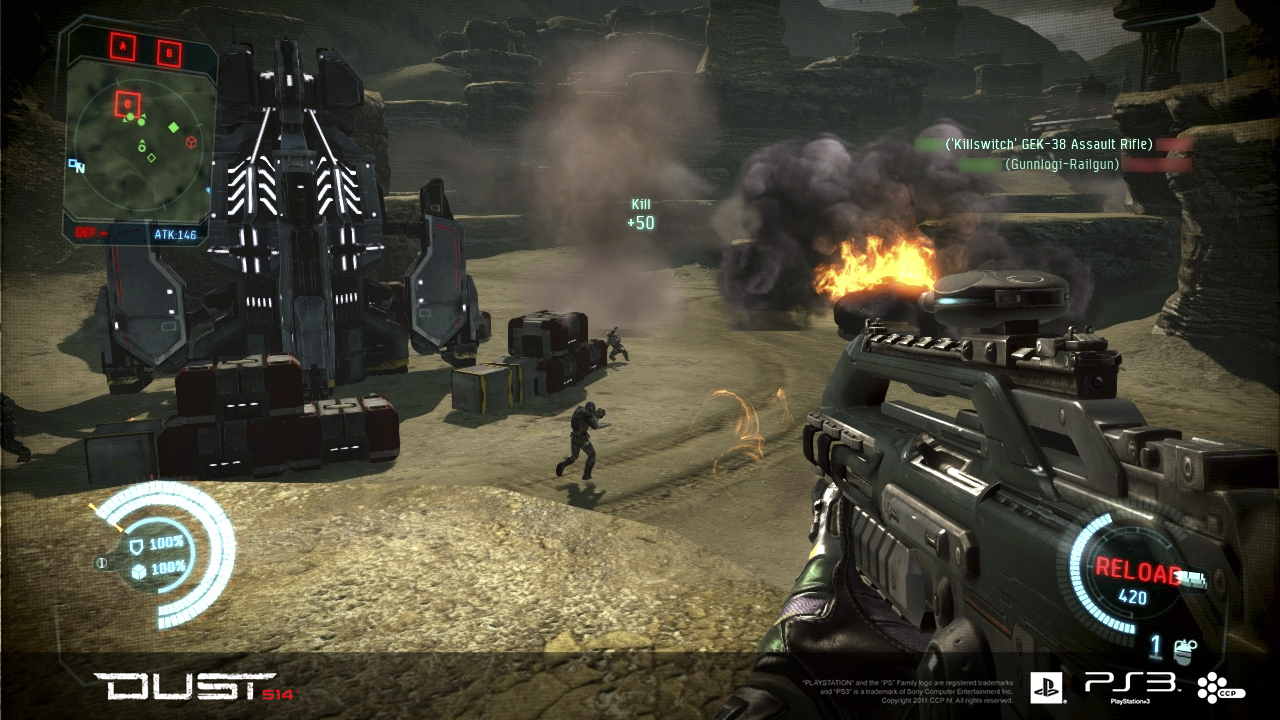 Much like its parent game EVE Online, Dust 514 is a game of interesting ideas, and oppressive execution. The game is fun- that much is clear -but many of the game’s aspects will likely be far from your comfort zone. Fortunately, the game is free-to-play, so, once launched, it will be easy to make the choice for yourself.

For those of you unfamiliar, Dust 514 takes place inside the universe of another game: PC exclusive MMO EVE Online. But when I say “inside”, I don’t mean “based on”; Dust is literally happening within the framework of EVE. In EVE, groups of players fight for control of certain planets from the safety of their spaceships, leaving someone to do the actual dirty work by fighting it out on the surface. In Dust that someone is you: a clone mercenary for hire. Yes, you’re a clone, a golden explanation as to why you keep showing up again every time you were shot in the face.

Players take jobs and sign lengthy contracts for EVE guilds (called corporations, if you didn’t know), and get paid in ISK, EVE‘s in-game currency. Dust players can then take that money and buy new gear, like weapons, buffs, and armors. So far, sounds pretty normal, right? Here’s the catch: Every time you die, and I mean every single time you kick it, everything you had equipped is permanently destroyed. This get’s a bit wild, considering that players can die numerous times in the course of a single match, much like other shooters. The same goes for vehicles, purchased ahead of time from the extensive marketplace. If you drop a week’s worth of ISK on a super tank, and someone blows it up on the battlefield, it’s bye bye tank, and bye bye everything you spent on it. Forever. For. Ev. Ver.

Interestingly, this mechanic is also used to determine how much money (aside from the paid contracts you hold with your real-life EVE Online overlords) you’ll take home at the end of a match. The game totals the value of everything permanently destroyed, and turns it into the match’s purse, then divvying up the value to players based upon the percentage of impact their individual performance had upon the outcome.

Skills work similarly to EVE, most slowly gaining over time, even when you aren’t there to grind them. Though you’re a death-prone clone, your consciousness is your own, and it’s that, not your perishable body, that maintains what you’ve learned.

I played my first match somewhere in the something system, in the something galaxy, on planet something-82352. There are that many places to fight: literally every planet from the game of EVE. I chose from one of six pre-made classes, though come full release time, players will be on their own to completely customize each loadout for themselves.

Once on the ground, I was met with a competent shooter. Things felt pretty standard, which isn’t to say bad. The health seemed just a tad too high (possibly due to the severe punishment of getting killed), but otherwise I was right at home as someone with moderate to high shooter experience. I was able to call in a variety of vehicles to spice things up, as well as do some interesting things on the map, such as hop inside of a turret, or spawn on a plane circling the battlefield. Once, my car got stuck on some terrain, and then it happened again. Most things worked just fine, but at least in my demo, there were a few kinks to still work out.

All in all, it was an interesting experience, and one hard to say no to at the zero dollar price point. Still, the heavy investment in customization, player-to-player contract negotiation, and high-risk gameplay may be too much for some to handle. On the other hand, maybe something bizarrely different is exactly what the genre could use right now.