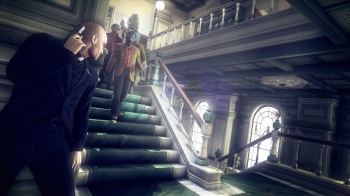 Hitman: Absolution catches up with the unfortunately barcoded and newly rogue Agent 47 as he chases the trail of a kidnapped, and hopefully not-yet murdered girl. Along the way, 47 will somewhat unsurprisingly need to kidnap and/or murder a decent-sized chunk of the population using everything from a Coke bottle to cocaine poisoned with fish bile.

Square Enix showed us a lengthy mission before we went hands on, showcasing many of the new, or newly imagined, mechanics of Hitman: Absolution. Perhaps the most intriguing is 47’s “intuition mode” a meter filled by performing various skillful tasks in dispatching with those unfortunate enough to be in your way. Players snatch points by handling things discreetly and efficiently, boosting score by hiding bodies, finding clever ways to utilize the environment, and making things look like an accident. By working well with what’s at your disposal, you’ll be able to trigger your instinct, a currency optionally spent in various quantity to pull off some significant tricks.

Perhaps the most useful is tracing, similar in style and idea to Batman’s detective mode in the recent Arkham games. While employing this special vision, 47 is able to distinguish pointless NPCs from the neutral yet interactive characters highlighted in yellow, and the targets highlighted in red. This also works through walls, apparently, making victim acquisition a snap.

If you’re looking to dump instinct points in a bigger way, there’s also a new target locking system in which 47 can draw his gun, freeze time, line up a sequence of shots across multiple targets (think Link’s boomerang post-N64), and release for an automatic assault able to down small groups in a matter of seconds.

It wouldn’t really be Hitman if it was all about the gunplay, however, and Absolution is no different. Each environment provides a glorious number of options to waste your enemies, from standard weapons, such as a knife or blunt object, to special environmental triggers, such as a leaky gas pipe or convenient forth-story ledge. The best, and simplest, example of this brand of variety would probably the wrench you find in an autoshop during a later game mission. 47 sneaks into an auto repair garage and sees his target loitering to the side of hoisted car. A wrench sits on a table nearby. If you pick up the wrench, you are faced with an immediate and obvious option: beat the brains out your target with his own tool and skedaddle. A moment later, however, you notice the car and the controls for its hoist. Now, using that same wrench, you realize you could throw it beneath the car, attracting the victim to the clang on the concrete, and drop a Plymouth Valiant on his head. Both uses of the wrench will get the job done, but one involves a more physical release, while the other makes his death look like happenstance.

There are a few other solid updates, too, such as a new sensical disguise mechanic which takes familiarity into account. These aren’t the old days of 47’s career where you could walk into a Chinese restaurant with a knock-off waiter’s costume and breezily pass as a man two-feet shorter with a different skin color. Now, switching into disguise isn’t actually helpful among those who would know you were faking it, i.e. dressing as a leather-clad sex nun car mechanic in the small two man shop; Fred is going to notice you aren’t Bill, and he should. That makes sense. The cop outside, however, is a different matter entirely. He doesn’t know Fred or Bill or you for that matter. If you really need to confuse Fred, though, an instinct power will let you cover just enough of your face as you walk by, making him think audible thoughts such as “was that my brother-in-law back from prison? He sure has changed in his time away,” (an actual example shown in the demo).

All in all, Absolution hits all of the points you want it to as a Hitman title, while cleaning up and innovating in a variety of engaging ways. If the final product lives up to its early showing, Absolution looks like a major winner for Square Enix come November 20th of this year.