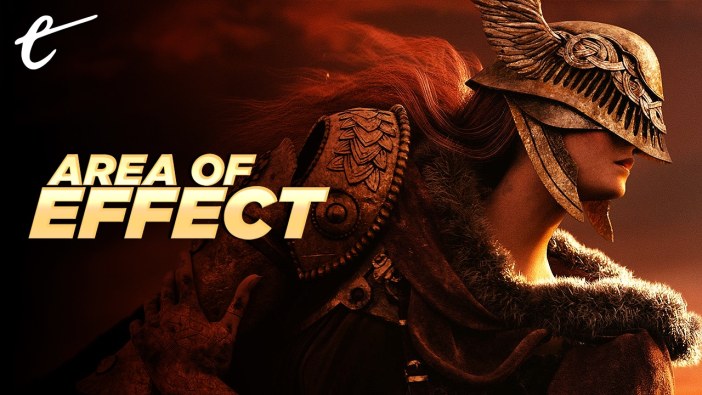 If at first you don’t succeed, boot someone in the face and watch them plummet off a ladder and into the abyss. Sure, that’s not a technique that Elden Ring’s tutorial specifically covered; in fact, I only stumbled across the feature when someone on Twitter mentioned it. But ladder fighting in Elden Ring is truly a wonderful, wonderful thing.

As far as some titles are concerned, ladders are sacred; they’re the demilitarized zone of gaming. The Resident Evil 2 remake’s prune-skinned antagonist may be intent on pummeling you into a thin, floppy hair-flavored paste, but the moment you step onto a ladder, all that changes.

Mr. X will wait, without so much as tapping his watch, while you ascend or descend. If you really want to rub your ladder-hogging behavior in, you can climb up and down, stopping just short of stepping off, and he won’t do a thing about it.

Elden Ring, on the other hand, isn’t going to let you get off that easily. Not only will some enemies follow you up the ladder, but they won’t dutifully wait till you’ve reached the top. Yes, a knight in armor clambering up towards you is a worrying sight, but having them ascend directly behind you is even more unsettling. 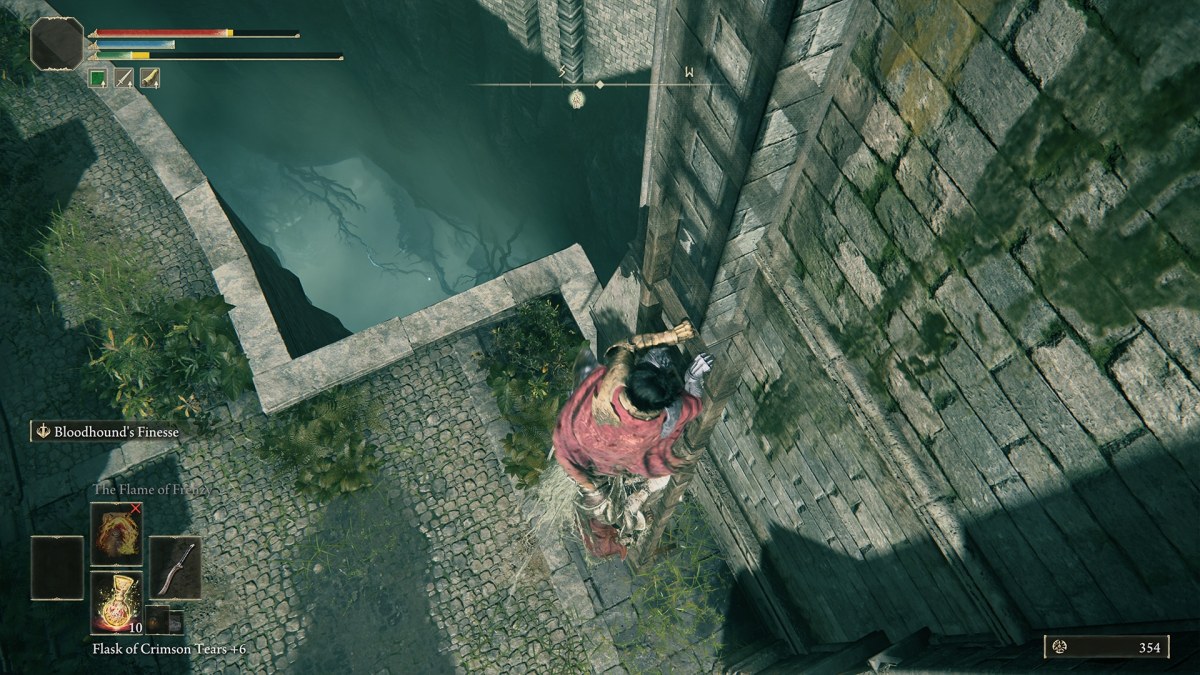 But it gets worse still. I remember thanking my lucky stars that a particular group of foes had decided to stay at ground level, at which point I saw the heavily armored knight coming down the ladder towards me. As you might have guessed, it didn’t end well — and that’s why discovering that you could fight back was such a revelation.

It’s deceptively easy when you know how. Tap the R1 button and your character will punch upwards; press R2 and they’ll fight down, delivering a blow to whichever enemy is beneath you. The mechanic features in other Soulsborne games, but ladder fighting really comes into its own in Elden Ring, due to the sheer wealth of locations and environments you can explore. In short, there are a lot of ladders and a lot of opportunities to make the most of this glorious mechanic.

Even when enemies don’t follow you, you can still lurk at the bottom of the ladder, kicking away at them. I still smile thinking about the hapless soldier whom I booted off the edge of a massive tower. If you’ve ever watched any of the WWE’s ladder matches, you’ll know how gloriously ridiculous those matches are, even staged, and from the outside, Elden Ring ladder fighting looks just as chaotic.

And I’ll happily admit that, the first few times I went looking for a ladder fight, I was ready to embrace the chaos. I’d refrained from scribbling down my Elden Ring discoveries, but the prospect of punching enemies to their doom was enough to make me pick up pen and paper. I started noting down anywhere an enemy would either follow me up a ladder or could be baited into doing so. 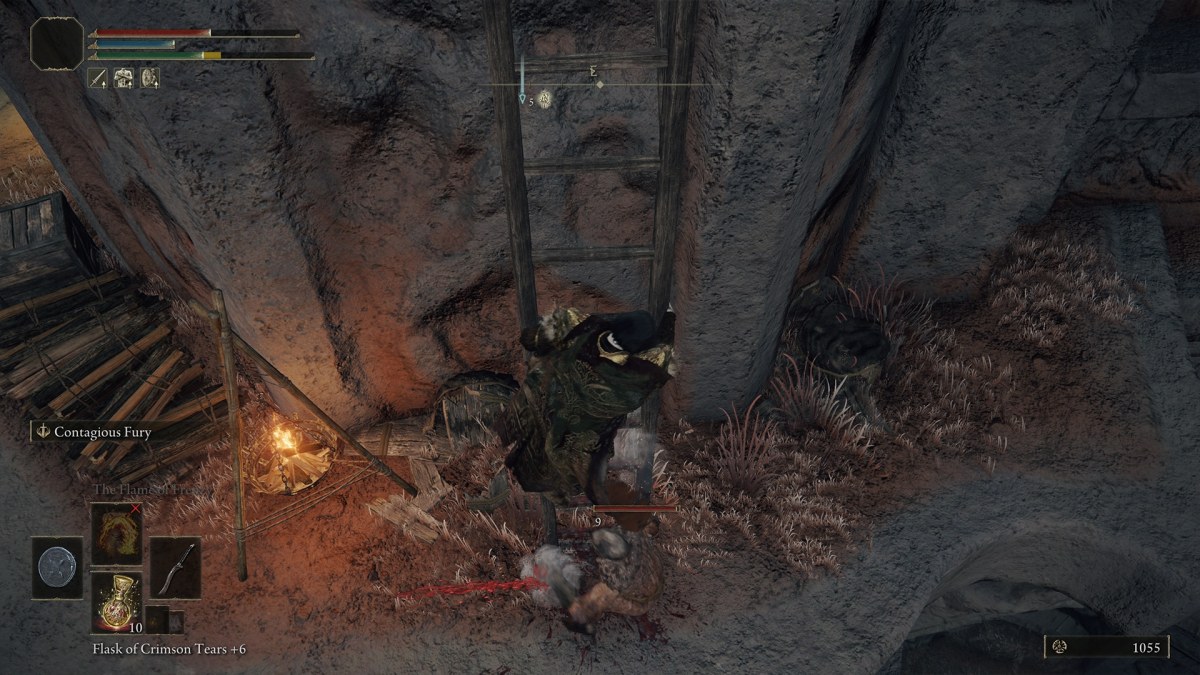 Stormveil Castle Rampart Tower – check. Forest Lookout Tower? Check. So in I waded, ready to challenge any NPCs who would dare challenge my ladder-fighting abilities, and for a while, flailing away with R1 and R2 was enough. Sometimes I succeeded in dislodging my enemies, grinning as a satisfying cloud of rune energy drifted up from their broken bodies.

On other occasions, I was the one who took a tumble, beating a hasty retreat if there was a scrap of life left in me. But – and this is the beauty of ladder fighting – there’s more to ladder-based punch-ups than you might think. The more I engaged in rung-based pugilism, the more I came to appreciate it as something other than a daft diversion.

Ladder fighting feels like the Souls equivalent of the fighting game Divekick, superficially absurd but with a real degree of strategy at play. It strips out multiple elements of Elden Ring’s combat system, leaving you with the bare minimum. Your opponent won’t be swinging their improbably large weapon while they’re gripping a ladder, nor will they be flinging spells around.

And while it’s not been absolutely confirmed, poise seems to have little effect. Instead, it’s stamina and, to a lesser extent, health that influences your success. Punching or kicking will cost a chunk of stamina, meaning that even if you get a hit in, you’re also one step closer to taking a tumble. Armor does make a difference, but setting up some kind of Naked Ladder-Fighting League would level the playing field. 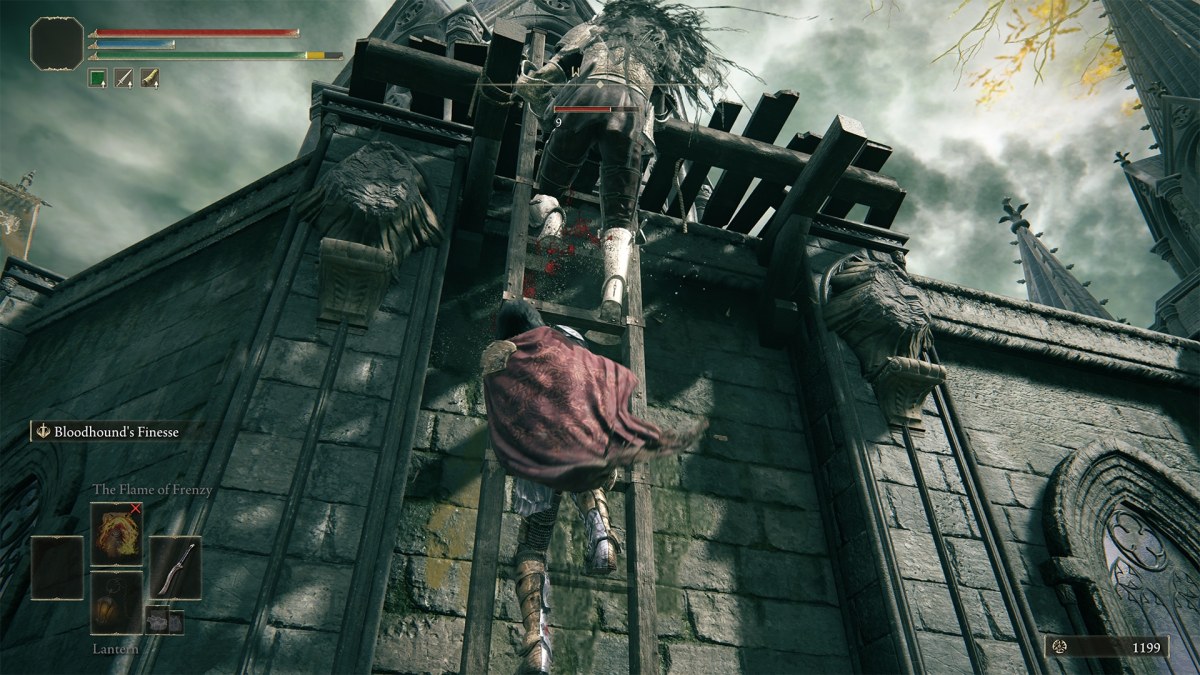 I’m only half-kidding, too – I’d happily participate in some sort of Elden Ring / Dark Souls ladder-fighting competition, and there are plenty of locations that could serve as a suitable battlefield. Take The Divine Tower of Caelid, for example, a location that gives me vertigo just thinking about it. Sadly, the NPCs that lurk on its many ledges don’t actively pursue you up ladders, but rope in a human player or two and it could be a spectacular brawl.

Sure, some naysayers will label ladder fighting as “cheap,” but there are also people who label spirit summoning, a mechanic that developer FromSoftware made an integral part of the game, as cheating, so that’s not really a huge concern. And for a relatively small touch, the ladder mechanics in Elden Ring are reassuringly immersive, knowing that the ladders aren’t these otherworldly places where you’re utterly untouchable.

In fact, forget Elden Ring 2 for now. Get From on a spin-off that’s exclusively focused on ladder combat. I rarely preorder games, but if From were to announce Elden Rung: Ladder Fighting Extreme, I’d put my money down right now. Plus, the esports revenue could be massive. There’s a market for watching people punch each other off ladders; just ask Vince McMahon. Put a few crash mats down and you’ve got a potential Olympic sport.

So if you’ve spent a whole week figuring out the attack patterns of whichever Elden Ring boss is currently kicking your bottom, why not take a break and step into the wonderful world of ladder fighting? Who knows, this time next year you could be The Elden Ladder Fighting League’s official Lord of the Rungs.