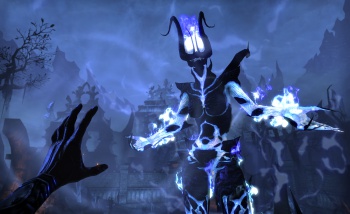 I’ve been eager to get my hands on Elder Scrolls Online pretty much since it was announced, and I was unreasonably excited to finally have my chance at QuakeCon. I was up hours before my appointment, passing the time with more than my share of Bawls, anxiously waiting for 10 o’clock to get there.

When you hear about the immense level of customization available, you probably won’t fully grasp what that actually means. You’ll start by picking your race and class, though this class will, in theory, only loosely define you, before moving on to your appearance. For the body, you’ll have sliders to adjust everything from length of arms and legs to the protrusion of your posterior. Once you’ve made your tall, spindly Sorcerer, or shorter, beefier Templar, you’ll get to the facial customization. The options here are ridiculous, offering what seemed to be dozens of customization sliders, including such fine-tuning as the slope of your forehead, roundness and size of your eyes, and the fullness of your lips. Of course, once you put on a helmet, most of this is going to be moot, but you’ll know it’s there, just under the protective façade of your plate helm or cowl.

Having spent a good 20 minutes of meticulous Bawls-fueled character customization, I dove headlong into the world with my Dark Elf Sorcerer, Encaen. It took only a few minutes to really acclimate to the control scheme, and the story took off immediately. A potentially dangerous ship was spotted near town, which may prove to be the vanguard of an invading force. It’s time to round up the townsfolk and evacuate. Naturally, the townsfolk are off doing their thing all around the zone, so it was no easy task to collect them all. Further to that, as you venture out into the world, you’ll start accruing side quests. There is no quest hub, rather your quests are collected as you explore the world. For example, you might run into a near-hysterical villager whose friends have been turned into Skeevers. Failing to accomplish this mission means several villagers stay missing when the invading force hits, so it’s not strictly a side quest in the traditional sense of the word. Likewise, you’ll be specifically looking for a few major characters, but are only required to find one before you progress the story line. Sadly, I only got one shot at it and, having limited time, I only rescued 7 of the 15 villagers before moving the story forward. I can’t say what ramifications my early departure might have had, but I’m fairly confident that the people I failed to save would have offered some assistance in the upcoming siege, had I taken the time to round them all up.
Having saved a few villagers from the now-burning town, and escorted about half of the remaining residents to safety, I was whisked away to the next zone, where the invasion was commencing. I was in charge of lighting the signal fires to alert the nearby villages and strongholds to the impending assault. I was taken all around the zone for the story quest, and was picking up various side missions all along the way. The lack of a central quest hub is a little jarring, as it makes exploring the world integral to the experience. You don’t have NPCs with bright yellow punctuation over their head to tell you that they have a task for you, and you won’t be guided to every out of the way nook and cranny on a quest to slay 10 wolves. The world seems truly alive when you’re out in the wilderness and hear a disembodied voice calling for help, only to discover that it belongs to a NPC with a mission for you. 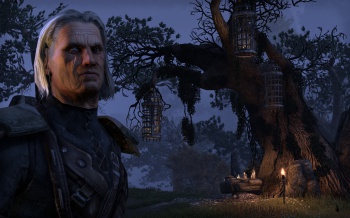 Another noteworthy difference you’ll see in ESO as compared to many other games is the UI or, more precisely, the lack thereof. While you’re out wandering the world, you’ll see only the thin compass at the top center of the screen, with icons for points of interest, like quest objectives. During combat, your action bar will show up, as if to remind you of your combat skills, but it is still fairly small and out of the way. Paul Sage, the Creative Director, actually took the time to point this out while we were talking. ESO wants you to get your cues from the world around you, rather than from a HUD, so they’ve kept the interface as clean as possible, and hidden what you don’t need to see until it’s important. Coming from WoW, for example, where I have a half-dozen action bars visible at all times, ESO‘s pristine interface does a stellar job of keeping you immersed in the world around you, rather than seeing the world through the interface.

I expect many Elder Scrolls players are going to be much like myself, in preferring a solo-oriented approach to any game, even an MMO. I’m happy to say that, at least from what I’ve seen, ESO is dedicated to the single player experience just as much as the multiplayer. That’s not to say that there’s going to be any lack of multiplayer content, of course, just that the main story line, which will inevitably be a huge draw to the game, is meant for you to experience on your own. If you want to be a tycoon, and trade your way to profits, though, you’ll need to join guilds, as the nearest thing you’ll find to an auction house is apparently related to the guilds that you are a member of. Likewise, the 4-man dungeons obviously require a group to complete, and the PvP zone, Cyrodil, will encourage (though not require) multiplayer cooperation.
On that note, Cyrodil is sounding like quite a PvP dream, integrating multiple battleground-like mechanics into the zone, so you can pick what you’d like to do whilst you slay other players. Additionally, you won’t have PvP-only stats, so the gear you earn while you PvP can be used in PvE situations as well, and vice versa. This may not sound like much, but it’s actually quite a big deal to players like myself, who divide their time between PvP and PvE content.

In case I’ve been too subtle so far, let me just put it out there: I am super excited for this game. It’s got a truly Elder Scrolls feel to it, with a heavy focus on the single player. It’s got robust crafting – I only managed to craft a few bites of food, but just looking at the system, it was obvious that a ton of work has gone into it. – exciting action-oriented combat, and natural-feeling quest delivery. If you’re eager for more Elder Scrolls, or just looking for an MMO to break the mold, then look no further than Elder Scrolls Online.

Elder Scrolls Online is slated for a Spring 2014 release on PC, Mac, Xbox One, and PS4.