“James Potter and the Elder’s Crossing” is a run of the mill fantasy tale written by an author whose clear strengths lie in presentation over storytelling. All flash, little style, and even less substance, the “book” quickly loses interest somewhere around chapter two or three, and the best reason to keep reading is to truly see how awful it gets.

Your changing typeface annoys me (Or, let’s talk Presentation)
While originally praised for a sleek presentation and professional look, unfortunately Elder’s Crossing doesn’t sustain these efforts as this progressive tale unfolds. Of significant note is Chapter 8, the Grotto Keep. Proofing fell by the wayside, as the PDF is riddled with formatting errors and an ever-shifting typeface that is distracting at best and annoying overall.

For all the hype of the author being an artist, this is sloppy and lazy and downright unprofessional. I wouldn’t hire someone who couldn’t double check the formatting in a PDF, especially with the blaring changes in typeface screaming “I was in a rush to do this and too cheap/lazy” to fix the errors.

I’m sure the author meant well –
With the distinct focus on Americans, which is undoubtedly Mr. Lippert’s point of origin and most familiar tromping ground, why not just export a character or two from the HP universe, call it an exchange program, focus on the Americans like he wanted to and be done with it? Still, there’s nothing really unique here, just a bland fantasy yarn confidently wedged into a Harry Potter context.

Less is also more, and too many characters jamming up the works does not a strong or compelling story make. The Americans which are presented more far superior than the British counterparts (Zane, a muggle born American, makes the Quidditch team, “James Potter” does not). Not only that, but cartoon characters litter the literary landscape, relying too heavily on unoriginal concepts:

“Thank you for your patience.” Franklyn said to the class, adjusting his glasses. “Welcome to Defense Against the Dark Arts. By now, most of you know my name, and many of you, I assume, know something of my history. Just to get some of the obvious questions out of the way: Yes, I am that Benjamin Franklyn. No, I didn’t actually invent electricity for the Muggles, but I did give them a small push in the right direction. Yes, I was a part of the American Continental Congress, although for obvious reasons, I was not one of the signers of the Declaration of Independence. At that time I used two different spellings of my name, only one of which was known to the Muggle world, which made it easier for me to know which…”

It gets worse. Older characters often mingle with younger ones. Despite the professed fondness for certain characters (“I liked seeing Ted, Sabrina, Petra and the rest in James’ classes.”) from the author it looks awkward and forced to the reader. While yes, it’s a less structured Hogwarts but think of the age differences? Seniors don’t hang out with freshmen, unless there’s a good reason to. Like these guys don’t have anything better to do than hang out with the youngsters?

The interpersonal conflicts between the main trio (and fanfic authors, here’s the reminder, it always has to be a trio so someone feels left out) feel forced and trivial, and did we also forget the Hufflepuff existence? I’m no ‘puff, but the serious shortchanging has got to stop, fanfic writers. So, in a nutshell:

1. Original characters should be used sparingly and with good purpose. Cluttering things up with a lot of characters is silly. Condense things. Characters can serve multipurpose.
2. Try to hit a note of originality with new characters.
3. Hufflepuff is a house. Please remember this.

No need to get quite so defensive, though.
“Again, I must admit a rather embarrassing fact: I did not read the Harry Potter books. I listened to them.”

Say what? Don’t tell the readers this! HP Fanfic, not HP Fic written by someone who is not much of a fan but wants to get the attention for a painfully mediocre work by putting it in the same settings.

The FAQ reads as a weak and near hostile defense of “I know you’re going to say it sucks, here’s my reply”. Instead of an interesting Q&A of why this work even exists and some of the process that went behind it, there’s these admissions of a tale that is poorly researched and naturally inferior (we don’t need to know this because all fanfic is inferior to JK Rowling’s original tellings).

This author statement speaks volumes to the quantity of devotion placed in crafting this tale, which is to say not so much. Details are “forgotten”, conventions are changed (“In my own defense, however, as mentioned elsewhere, this is nearly two decades after the Hogwarts we all knew.”), and the whole concept comes off as lazily written, when there are many sources available to check even basic facts. Hey, I’m not here to pick out the vast number of errors anyway. I’m here for a good story that is enjoyable, pleasant to follow, and consistent to itself. Any story that fails on the first two counts – well, what can I say other than “don’t bother”. Time is precious, especially for any of you trying to sneak looks at this while your boss is out of town for the holidays.

You can do so much better for entertainment. Readers could spend the same time and write something better.

I don’t like overly defensive authors much in the way I don’t like ones that beg for reviews. The former is much easier to rip apart. Humility is a good thing. A stab at martyrdom is not.

At least we agree on one thing: the HP universe is there to support the HP story. Too bad this fanfic doesn’t support that universe.

In which I at least say something nice (the good side)
The art is not bad, which is to say it’s very stylistic and consistently done with the occasional sufferings of cross-eyed subjects.

TL; DR (too long; didn’t read: get to the point already)
Is it worth the time? No. Originally created as a project for family and friends, it probably should have been mailed around and left at that. While I did lower my expectations appropriately and this is in no way is nearly as bad as James/Lily fanfic that has Lily spending the summer working for James’ parents and communicating with him by e-mail across a too large mansion (what? Excuse me, what? Anachronistic and stupid all in one shot!) as they fall in looooove, or shmoopy sick-sweet next-gen Rose Weasley and Scorpius Malfoy (to construct, write standard Hermione + Draco, shift names accordingly), or Harry and the gang go back to school to finish their studies after the Great Second War (complete with the rise of a new dark lord.. oh never mind, wait a minute) that I’ve seen, it’s still not that great and ranks a slim step above those three very real examples I mentioned, lowered expectations and all. 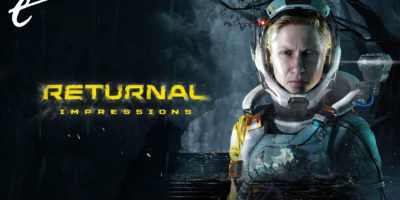 Returnal Is the First Big Surprise of 2021