The past few weeks I have been doing prep work leading up to PAX Prime, where I will be exclusively covering indie titles. Adventures of Pip was selected as one of the PAX 10, and if I’m being honest, the only reason I started playing the game was to determine whether or not to set up an interview with developer Tic Toc Games. What started as research quickly evolved into me setting up the interview I am probably most excited about, as well as losing quite a few hours enjoying the hell out of myself. 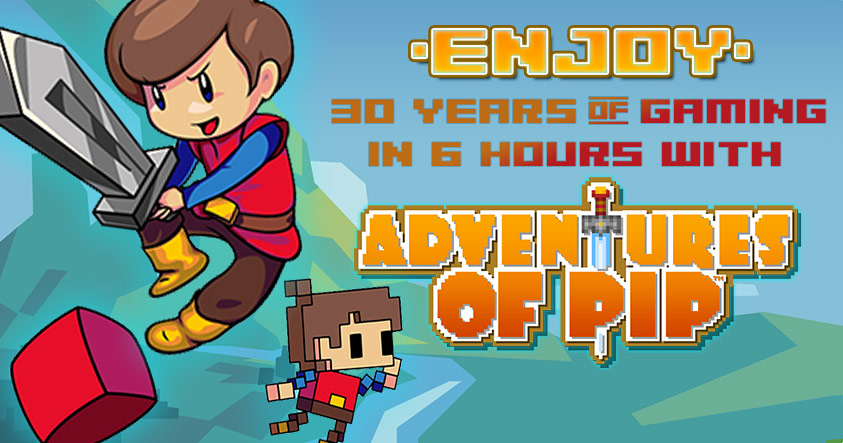 Adventures of Pip takes place in the Pixel Kingdom, a land that uses resolution as the ultimate determination of social class, with the King, Queen, and Princess Adeline weighing in at an impressive 32-bits. The game kicks off with the Princess being kidnapped by the Evil Skeleton Queen, the king and queen being devolved to single pixels, and an unlikely hero on a mission to rescue both the Princess and his kingdom. The character you control, Pip, starts the game as a single red pixel, eventually gaining the ability to evolve to 8-bit and 16-bit versions. You can devolve your character at will, and evolving comes when you kill a constantly-respawning crystal enemy. Each version of Pip has pros and cons, and you’ll have more than enough time with all of them. Pixel Pip can fit through small spaces and floats when he jumps. 8-bit Pip is the quickest, and does some awesome Ninja Gaiden-style wall jumps, and 16-bit Pip might be the slowest, but he has a sword, which comes in handy for killing enemies that you can’t safely punch or jump on.

The underdog is coming of age in order to save the princess. If the game wasn’t so wonderfully made, I’d be talking about all of the cliches wrapped up in the plot.

There are five different worlds (lands? realms?) Pip travels through on his mission to rescue the princess: the forest, swamp, caves, lava, and castle. Each world has eight levels, with the exception of the castle which, for some reason, has only four. The game started out a bit slow for me, and if I wasn’t doing research I’m not certain I would have stuck it out past the first two levels. There was a good portion of hand-holding that had me worried it would be too easy. Luckily that changed soon enough, and I was able to get in three solid rage quits during my playthrough. I didn’t just finish the game, I earned the finish.

I usually have to concentrate hard to focus on the storyline in any game, as I’ve always been eager to get to gameplay and tend to button-mash my way through dialogue. With Adventures of Pip, the story is a large part of the gameplay instead of just serving as background noise. Dialogue was brief, easy to follow, and charmingly goofy. The term “rez-ist” even pops up, and that made me laugh harder than I feel comfortable admitting.

My favorite part about AoP is that the primary enemy you are facing in every level is the environment itself. Every actual enemy you encounter can be taken out with a single blow (save for bosses, of course), and often the presence of enemies is to aid you in completing a level, typically in order to make difficult jumps. There will be levels with rising lava, walls closing in on you, and moving spiked blocks, and as a player you will need patience and problem solving skills in order to make it through certain portions of each level. More failures are tied to timing errors than anything else.

The game is not without its flaws, of course. Adventures of Pip was successfully funded on Kickstarter on October 4, 2014, raising just under $66,000 – a drop in a bucket compared to the cost to create most games. At that level concessions had to be made, and I do have to applaud the developer in making the least invasive cuts possible.

Each level is loaded with hidden nooks, most of which include villagers to rescue (of which each level has three) or chests filled with the in-game currency. However, the items available at the shops are overpriced and not particularly worth purchasing, with the exception of extra hearts. The game also offers no real incentive to rescuing the villagers. By the time I was halfway through the game I was skipping over the extra areas without feeling shameful, and unless you’re a completionist you can pass over them and give nothing up. If there were different types of chests that featured additional items – like the overpriced potions or a weapon upgrade – there would be more of a benefit to all the extra areas.

Adventures of Pip is also a short game. When I first got a look at the map – which poked a Super Mario Bros. nostalgia stick at me – I anticipated the game taking longer than it did. In reality, you have an estimated 5-6 hours of actual gameplay. The levels are challenging, and if you don’t have the right amount of patience (I don’t), you could find yourself dying quite a bit. Still, when I finished the game it didn’t feel finished.

AoP clearly drew inspiration from many of the video game greats, employing mechanics and features reminiscent of certain titles without feeling like it was ripping anything off. The evolve-devolve mechanic, while probably not intentional on the part of the developer, made me think of one of my favorite childhood games, A Boy and His Blob. With the exception of the Queen, the bosses all follow the classic “rule of three” – three blows and you’ve defeated the boss, although after each hit the environment adjusts to increase difficulty. Several aspects of the lava levels felt reminiscent of Bowser’s castle, and a few adorable skulltula creatures were thrown in at the end, effectively appealing to my ingrained love of The Legend of Zelda.

Adventures of Pip is an imperfect game that did the absolute most, and more, with the money allotted, and I can easily see myself doing a replay in order to achieve 100% completion. While I would have liked to have seen a bit more length added, more varied chest items, and some sort of incentive for rescuing all of the hidden villagers, I give this game a big thumbs up and cannot wait to see what Tic Toc Games comes up with next.

I will be interviewing Tic Toc Games at PAX Prime later this month. What questions would you like to see answered? Leave them in the comments!