Enter the Gungeon has just about every kind of gun you can name, imagine, or hallucinate in a fevered delirium, but there’s only one gun you care about; the Gun That Can Kill the Past.

We’ve been paying attention to Dodge Roll’s quirky twin stick rogue-lite Enter the Gungeon for some time. It put up a great show at E3 2015 with a first look at the co-op mode, which was so good, we gave it a We Love it Award. It has now evolved into its final form, and it’s a doozy.

The premise of Enter the Gungeon is that you are one of a small group of people with troubled histories who are pursuing a legendary gun in the world’s most dangerous dungeon, The Gungeon. The legends say there is a gun that can kill the past, and you must explore the deepest and most dangerous depths to learn the mysteries and claim your prize. As you might expect, guns and their accoutrements are a common theme. 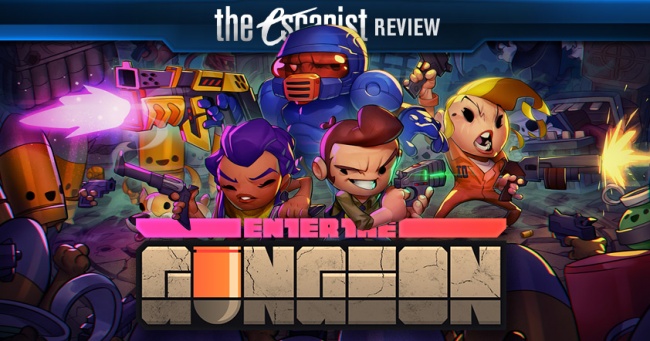 Gungeon is standard fare for the lite side of roguelikes, with most progress resetting each time you die, but offering significant options for permanent progression. You don’t get to keep that Unicorn Gun you died with, but you can purchase unlocks for all your future runs with a special currency. All else aside, Gungeon is a fairly standard top-down twin-stick shooter with an awesome gimmick and a flair for the comedic. Full disclosure: I’m particularly fond of a good gimmick.

The gimmick in Gungeon isn’t just the ridiculous number of guns available in the game, though that is definitely a sub-gimmick to be proud of. The majority of the enemies you’ll face are themselves gun-related. You’ll fight red-topped cylindrical enemies that look like a shotgun shell and shoot, as you may expect, shotgun blasts at you. It follows that the 9mm looking enemy uses a pistol. Snipers are identifiable because of their pointier heads, typical of sniper rounds. Also, the laser sights are kind of hard to miss. Enemies that don’t look like bullets are still bullet-related in some capacity. The “Beholster,” for example is a run-of-the-mill beholder using guns instead of spells.

As you explore, you’ll find chests scattered around, which can provide the loot you’ll need to push further. Most chests are locked, though, so keys are crucial, since destroying the chest only occasionally results in anything of value. It didn’t take long for the perpetual hunt for loot to become my single biggest grievance against the game; there just aren’t enough guns. For something called Enter the Gungeon, you’d expect to be up to your knees in firearm options, but I can’t even begin to estimate how many times I’d clear an entire level, opening 2 or more chests, and still never see a new gun. Fighting a boss with the starter pistol is usually a waste of time, unless you’re particularly good, so when this happens, it’s basically the most anti-climactic “Game Over” you’re ever likely to find.

The learning curve is very reasonable at first, but there are regular spikes that less proficient players will find incredibly frustrating, primarily at bosses, but there are some regular enemies that serve the same purpose. I am in this category of players, admittedly, and expert gamers can rest easy knowing that Gungeon is incredibly fun, so long as you’re doing well.

I’ve had a whole lot of fun with Enter the Gungeon. It was exhilarating every time I hit a milestone, like first unlocking the elevator. Clearing several rooms with a crossbow, taking no damage, and connecting every shot with flawless precision will make you feel like a you could shoot a god. You’ll very likely get a lot of hours of entertainment out of it before you’ve had enough, but aside from those with skill, luck, or both, the fun will probably end before the game does.

Bottom Line: Enter the Gungeon is an exhilarating experience, but the difficulty often comes from the game refusing to provide you the necessary tools, which offers its own unique challenges.

Recommendation: Fans of the genre should definitely check it out, but folks considering branching out may want to look for something more likely to end with smug satisfaction than a broken controller.

After Two Years on Early Access, Starbound is Launching Soon