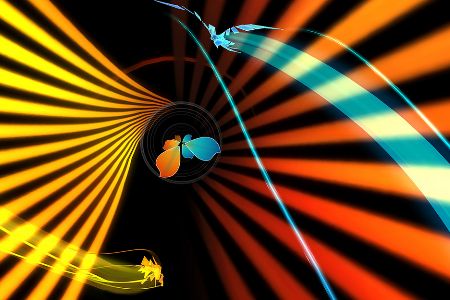 Releasing itself during Sony’s E3 press conference, Entwined enjoyed a surprise launch, even if it occurred while most videogame reviews were safely ensconced in Los Angeles and unable to get their hands on the thing. The latest in the PlayStation brand’s “artsty fartsy” line of games, joining such critical darlings as Flower, Journey, and The Unfinished Swan, Pixelopus’ Entwined is high on the audiovisual quality, but not exactly bursting with much else of note.

Styling itself as an abstract love story between a fish and a bird, Entwined supposedly tells the tale of two entities who are always together, yet forever apart. In gameplay terms, this amounts to something similar to the bonus stages in Sonic the Hedgehog 2, only more shallow. A shallowness that attempts to disguise itself through pretty graphics and an a sweeping soundtrack.

Players take control of the fish with the left stick and the bird with the right, swiveling said sticks around in order to move the two entities in semicircles as they fly/float along a fixed linear path. As the creatures make their way through dazzling environments, they must pick up correspondingly colored orbs (orange for the fish, blue for the bird) in order to bring their two icons closer together. Along the way, they’ll encounter similarly colored checkpoints that they must pass through without error, less they lose orbs and be required to collect even more.

Basically, it’s like Rez without shooting, or Flower with the pretense of failure.

Naturally, the simple premise grows slightly more complicated as the game progresses, with the checkpoints requiring one’s thumbs to move in opposing directions, or require different timing in an attempt to confuse the coordination in one’s hands. The head-on perspective and the translucence of the checkpoints can sometimes confuse and addle, contriving situations that are more difficult than they perhaps ought to be. Even so, the only punishment for failure is a temporary loss of progress, with each level beatable through sheer attrition if nothing else.

Once the bird and the fish each have enough orbs and bring their icons together, they merge to form a dragon, because why not? As a dragon, the player floats around a free roaming but small environment, collecting even more orbs until they fill a meter. When the meter is filled, the dragon can then paint a trail in the sky because of some reasons, and the level may be fully cleared. The dragon isn’t particularly enjoyable to steer around, especially since the camera can sometimes flip out, and frankly I don’t see the point of the entire section.

If there is a point to anything in this game, it is for deeper men than I to pontificate on. It’s not the worst time I’ve ever had, but the hour or so spent with it could have been spent doing dozens of more entertaining things. The visuals are pleasant and the music is pretty, but beyond the aesthetic there isn’t much else worth praising. It’s just an on-rails … thing … with only vague and vapid allusions to something deeper – relying on the Supergiant method of using surface-level beauty to hint at complexity rather than demonstrate actual subtsance.

Nevertheless, it was very nice of Sony to give Pixelopus a go, and these are the kind of experiences you just don’t get on other consoles, so that’s nice. It’s not nice enough to be worth a ten dollar asking price, but if this thing ever goes on sale for a few bucks, or free via PlayStation Plus, it’ll be worth giving a spin for five minutes or so.

Not awful. Not great. It’s one of those games that are just kind of … there.

Bottom Line: While its skin-deep qualities suggest something artistic and maybe a little philosophical, this middling arcade game packs not enough wallop to be worth more than a bit of a shrug. While not awful, it’s certainly not intriguing enough to maintain interest even in spite of a brief running time.

Recommendation: Wait until it’s $1.99, or at least free on PS Plus.