Like a night-capping fireworks display over Sleeping Beauty’s Castle, Disney Epic Mickey arrived with a bang. One of the year’s most anticipated titles, the Wii exclusive also marks the iconic mouse’s long-awaited return to the medium. Mickey’s latest adventure puts him in Wasteland, a wildly imaginative world made up of familiar, yet slightly askew sights and sounds that anyone who’s toured a Disney park will recognize. You see, Wasteland was created by Oswald the Lucky Rabbit – Walt’s first, but ultimately abandoned, cartoon star – as a safe haven for other forgotten toons like himself. Envious of his rodent half-brother’s fame, Oswald models his world after Mickey’s, complete with rides, attractions, and themed lands. His bizarre version, however, isn’t quite the Happiest Place on Earth. 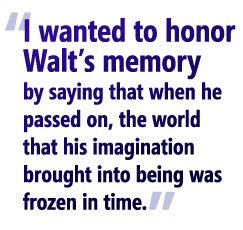 For gamers, this means trekking through twisted takes on the Haunted Mansion, Sleeping Beauty’s Castle, Pirates of the Caribbean, and many other beloved Disney destinations. Wielding a magic paintbrush – borrowed from Mickey’s old sorcerer buddy Yen Sid – players can alter these surroundings with paint and thinner that create and destroy, respectively. While puzzling, platforming, and getting behind the brush in Epic Mickey is certainly appealing, the game’s real draw, so to speak, is its lovingly crafted environments. Whether battling a boss atop Wasteland’s Space Voyage (a nod to Space Mountain) or solving a puzzle in a decidedly darker version of “It’s a Small World,” where the water’s been replaced by a river of Mickey-melting thinner, fans will continually discover reasons to flip their Mouse ears.

The creation of this detail-drenched, Disney-with-a-twist world is due in no small part to legendary designer Warren Spector’s passion for the mouse-driven source material. Quite literally a Disney fan since birth – he still owns the Pluto plush toy his dad bought him the day he was born – the Mickey Mouse watch-wearing Spector recently conducted a tour of Disneyland, appropriately enough, to discuss the inspiration behind his latest project. Showing a masterful command of the park’s layout (he must be an annual pass holder), Spector pointed out some of his favorite rides and explained what players can expect from their corrupted counterparts in Wasteland.

Beginning with classic dark-ride Pirates of the Caribbean, Spector explained its inclusion as well as its significant role in shaping Epic Mickey‘s entire world. “I set a cut-off date for things in Wasteland of 1967 because it was a big year. Pirates was the last ride Walt himself had anything to do with creating. Additionally, 1967’s Jungle Book was the last feature film he had anything to do with, so I thought that would be an appropriate cut-off date; so nothing in Wasteland – at least not that we know of – comes from after that. I wanted to honor Walt’s memory by saying that when he passed on, the world that his imagination brought into being was frozen in time. In addition to that, this is clearly one of the most iconic rides in the park. We had to include Pirates in the game.”

In addition to hearing lots of “yo-ho-hos” in Epic Mickey, players ears’ will be bathed in plenty of “boos” when they enter Lonesome Manor, the title’s take on the Haunted Mansion. The popular attraction is the only one that’s different in all four versions of Disney theme parks around the world, a defining feature Spector wanted represented in the game. “This one has some of the most iconic elements … the graveyard, doom buggies, the stretching room, Madame Leota, the paintings that change, the ballroom with ghosts dancing to the pipe organ … all that stuff is so familiar to us, we had to include it in the game. The cool thing about this attraction is that it’s different at every park … the mansions are different. So rather than doing a rejected Haunted Mansion in the game, we took elements from all the different mansions and mashed them all together. So when you play the game, it’ll be up to you to figure out which parts of our Lonesome Manor came from which parks.”

Epic Mickey is brimming with Easter eggs, call-outs and, of course, hidden Mickeys, so multiple play-throughs are encouraged for completion-addicted players wanting to see everything. Its Tomorrow City (based on Tomorrowland), for example, is packed with tiny details and fan-pleasing bonuses buried within its unique architecture. As Spector explained, the sci-fi land also plays an important narrative role in the game. “Tomorrowland has always been a symbol of hope and of mankind’s aspirations for the future, and it kind of plays the same role in the game; it’s a Wastelander’s hope for the future, that there is a future for all of them. Also, specific icons that inspired me … well, Space Mountain is clearly one, and one of our boss battles takes place on top of it. Also, the architecture here is crazy inspirational, and the environmental artists really captured it in the game … when you play the game you’ll find a lot of familiar things from here.”

“It’s a Small World”, the often ridiculed, but unquestionably classic attraction, also appears in Mickey’s paint-fueled quest. In fact, its inclusion perfectly reflects Spector’s vision for respecting the source material, while also putting a fresh spin on it. “In making a game that appealed to everyone, I thought we had to set a tone of respect and love, but also irreverence. And what better way to do that than let people get inside “it’s a small world” and start erasing stuff. And that music that gets stuck in your head … you might be able to do something about that too. But also, after meeting with Disney and riding the ride again, I came out, saw its clock tower and said ‘That is the first boss monster in Disney Epic Mickey.’ So yeah, you might get to shut him down or help him solve his problem and make him a friend.”

No Disneyland-inspired game would be complete without a visit to a towering fairytale castle. Thankfully, Spector ensures fans of Cinderella’s and Sleeping Beauty’s not-so-humble homes won’t be disappointed. “We actually modeled our castle more on the Disneyland Paris version rather than the one here or in Orlando. We did this partly because the one in Paris is way bigger and partly because it’s a little bit more colorful, but also because I thought it would be more unfamiliar to people. You’ll have to spiral your way up it – it’s not easy, trust me – and when you get to the top, well, let’s just say, fireworks play a role. It’s Disneyland, it’s nighttime, fireworks have to play a role.”

Spector’s dedication to authenticity and desire to deliver a pixie dust-sprinkled product seems to be the result of genuine affection for the House of Mouse – a love that hopefully translates into an equally engaging experience for the Mickey-loving masses and gamers who’ve never donned a pair of mouse ears.

Matt Cabral is a full-time freelance writer covering videogames, film and television for a variety of mainstream and enthusiast outlets. He also spends way too much time thwarting virtual alien, zombie and Nazi threats. Find him on Facebook or follow him on Twitter @gamegoat.