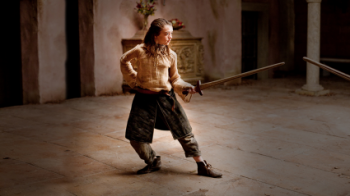 This week an astute viewer might catch a little gem before the intro finished. Episode eight, “The Pointy End”, was penned by none other than the writer of the novels from which the show is adapted. Who better than the original creator, George R.R. Martin, to breath even fuller life into the story? Fans of the novels might want also want to check out Greg’s commentary on this episode, otherwise I’ll be taking over for Susan this week as she’s out at E3.

In the last episode, it ended with LITTLEFINGER and the CITY WATCH betraying NED STARK and company. This episode continues there, opening on SYRIO and ARYA. The two are practicing their “dancing lessons”, currently unaware of the Lannisters attacking the Stark household and retainers elsewhere in the Red Keep. The SEPTA however guesses as to what’s happening, and quickly orders SANSA to go to her room and stay there. Our last image of this catty old woman is staring down bloody Lannister swordsmen.

Syrio proves to be much more a match for Lannister swords than some stern looks, deftly disabling four men with little more than a wooden stick. This allows Arya to flee, but only to discover the carnage of the slaughter near the stables. She recovers NEEDLE from her trunk and escapes the castle, though not before clumsily and accidentally stabbing a stable boy who was trying to hand her over to the queen. Later, CERSEI, Littlefinger, GRAND MAESTER PYCELLE and VARYS are all grilling Sansa to urge her brother and mother to keep the peace. Sadly, her feelings and infatuations with JOFFREY and her family are easily manipulated into writing the letters.

In the dungeon, Ned has a surprise visit from Varys, who has snuck in wearing the guise of a guard. Ned questions why the spymaster did not do the honorable thing. It seems like that one would answer itself, but he responds that he is no hero and that ultimately someone must serve the realm while everyone is serving only themselves. Which does make a strange bit of sense, even Ned was ultimately serving his honor rather than doing what was really best for the country.

There still are some who are willing to set aside for the rest of the realm. At Castle Black, SAM makes the observation that dead rangers they’ve found should smell worse for men dead several days. Do frozen bodies really rot though? The commander orders them examined by the maester. Afterwards, MORMONT breaks the news to JON about what’s happening in the South with his family, urging him above all to not do anything stupid. Now that he’s taking his vow, if Jon left Castle Black he would be killed on site as a deserter, much as the watchmen in the opening episode. Jon somewhat promptly does something stupid; he attacks ALLISER THORNE with the kitchen knife after he provokes Jon. The Lord Commander confines him to quarters.

ROBB STARK is even faster to action than his bastard brother. Learning that his father has been taken prisoner, he “calls the banners”. MAESTER LUWIN sends out a torrent of ravens to carry the letters to all the lords pledged to house Stark. The young Stark unproven in battle has little to stand upon when commanding these men, but dire wolves however prove to be excellent negotiators when GREY WIND bites a few fingers from an unruly JON “GREATJON” UMBER, who is remarkably much more agreeable after losing a pair of digits. The Vale and LYSA ARRYN are much less willing to fight. Lysa is not willing to risk her creepy son’s safety, much to CATELYN STARK’S dismay. Also in the Vale, we see BRONN and TYRION cheerfully quipping. Well, maybe Bronn a little less so, but Tyrion promises the sellsword a few things: gold, women, even golden women, that he could always need someone with a facility for murder and most importantly no matter what price is offered to Bronn, he’d always beat it. Tyrion further uses his wit, humor and promises to secure the aid of the mountain tribes that befall them. 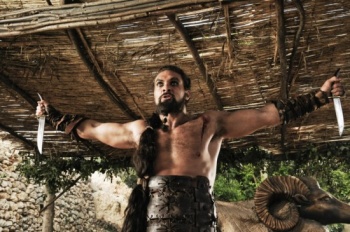 Things are going less well back on the THE WALL. While confined to his quarters, Jon breaks his punishment when GHOST begins behaving strangely and aggressively. The freed dire wolf is hot on the trail and leads Jon straight to Mormont’s chambers. One of the dead rangers, doing his best zombie impression, attacks both Jon and the commander, and even after having a hand hacked off and a sword through the gullet he continues to move. Only when Jon tosses a burning lantern to set him ablaze does it finally stop. They barbeque the corpses to make extra sure, and Sam shares that his readings suggest they ought to pray the Wall is high enough should this really be the WHITEWALKERS waking up. This is accompanied by our first long pan up of the Wall, it’s really big.

The Dothraki and DAENERYS are a story of unintended ramifications. After her insistence in the last episode for DROGO to take the horde to WESTEROS (plus the attempt on her life), he raids a town for the resources and slaves they will need to barter passage on the “wooden horses”. Daenerys claims many of the female slaves for her own, so that the men cannot rape them, and this angers one of them enough to challenge Drogo. Though this serves to be the challenger’s demise, who only scratches the mighty Khal before Drogo cuts open his throat and rips out his tongue.

Back across the ocean, everyone else is preparing for their own battles. Catelyn arrives at ROB’S somewhat more meager camp of 18,000 men. We know from earlier that TYWIN gave JAIME half of the Lannister 60,000 and we are told that Jaime is already laying siege to RIVERRUN, Catelyn’s home. Rob is outnumbered facing either force, and to make matters worse, they hold his father, sisters and would likely put them all to the sword for treason. He can’t afford to lose.

Later during their planning, a scout is caught and brought before Rob and bannermen. Rob takes the opportunity to turn the man loose, having him deliver a taunt to Tywin Lannister. “Winter is coming for him. Twenty thousand Northerns marching South to find out if he really does shit gold.” Rob is faced with a dilemma of marching down the Neck or trying to gain passage from the only bridge to meet up with the RIVERLORDS. The bridge is held at THE TWINS, a castle and lord not known for being quick to display honor. On the Lannister side, Tyrion arrives at his father’s camp, to a degree of surprise from the elder Lannister. Tywin promises to keep Tyrion’s offers to the mountain tribes, though they insist on taking the Imp into battle until they have been fully reimbursed.

Finally, we end on meeting of the court before the Iron Throne. JANOS SLYNT, commander of the City Watch, is being elevated to the title of lord, likely his price for betraying Ned Stark. Tywin Lannister is named the new Hand of the King, and a surprising order of dismissing SER BARRISTAN from the Kingsguard. Jaime is to be the new lord commander. Given Barristan’s honorable reluctance in the previous episode, it’s no wonder that Cersei doesn’t feel comfortable with him around the King, her son. Then again, he has had two kings die under his charge recently, not exactly a great track record. This is a bold move though; the Kingsguard is an oath of service until death and Barristan storms out of the room after stating that he could still cut through the five remaining Kingsguard with the ease of cutting a cake. A call is made for any further business and Sansa steps forward to beg for mercy. Joffery, with that sly Lannister smile, says he is moved by her words, but in order to show mercy her father must admit to his crimes.