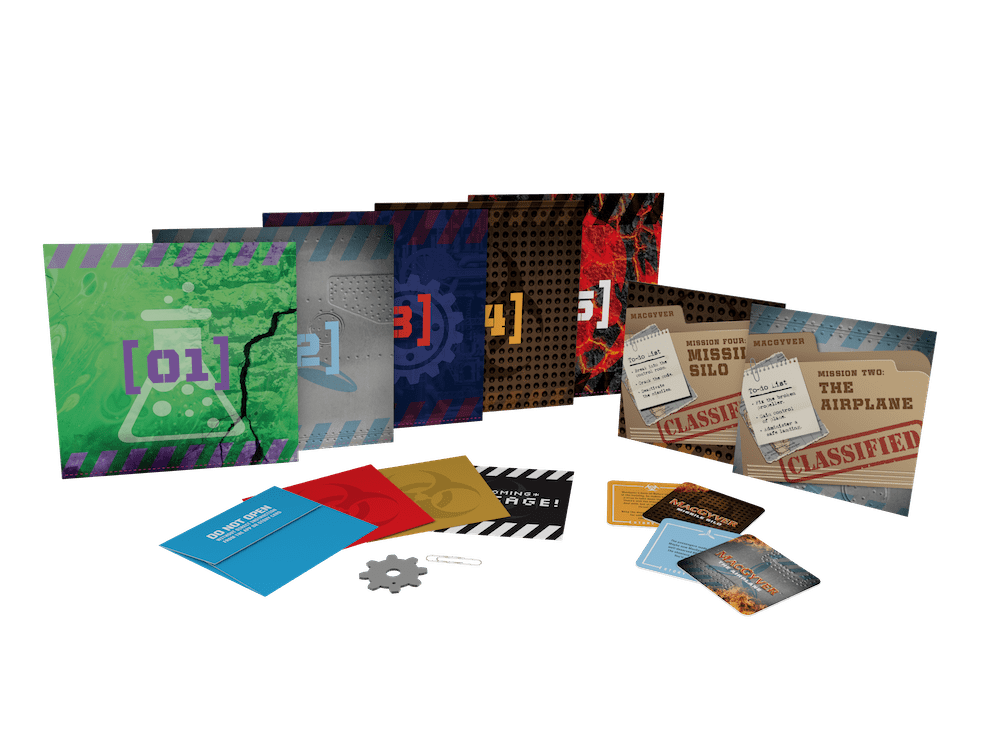 In the past decade, escape rooms have evolved from a niche activity for people convinced they could get out of Jigsaw’s traps in the Saw films to a booming industry with thousands of locations across the U.S. The chance to work together solving puzzles in order to escape a murderer, prevent the apocalypse, or find buried treasure has attracted couples, parties, and corporations using the challenge for team-building or even job interviews. That popularity has led some board game makers to try to distill the experience into something that can be played at home with mixed results. Like the physical escape rooms, the production value and balance between fun and frustration can vary dramatically.

Escape room games often force players to search for random objects and solve riddles or perform tasks that seemingly have little to do with the overall challenge. That’s that makes Pressman Toys’ MacGyver the Escape Room Game such a perfect fit for the genre. The game comes with five missions where you take on the role of the titular ‘80s TV star using his wits and whatever happens to be lying around to save the day.

One of the great pleasures of visiting an escape room is taking in the scenery. A well designed room comes with props, only some of which are useful, to make you feel like you’re really occupying the space you’re supposedly trapped in. That’s a lot harder to do when you’re sitting around a game table at home, but MacGyver offers some of that kinetic pleasure by having players rip open envelopes and sealed pages in a puzzle booklet as they progress. When you think you have the solution, you enter it into a companion web page which also acts as your mission timer. Difficulty ranges from easy (not timed), medium (75 minutes), and hard (45 minutes), with wrong answers taking time off the clock and correct ones moving you forward in the mission by providing instructions on what to do next. If you ever get stuck, there’s a button you can click for progressively more informative hints up until the game flat out provides the solution. It’s a nice feature, though not one we ever needed to use.

The missions are just as silly as the show that inspired them. In the first one, MacGyver must stop an acid leak in an underground lab which involves finding a hidden password to disable the security systems, arranging pieces of furniture for a classic game of “the floor is lava” (or in this case acid), and rewiring the air filtration system so he can breathe easily. All of these involve small cardboard puzzles of varying quality. For instance, one task involves a mirror, but the reflective piece the game comes with barely provides a sheen, making it hard to use. Other times half the challenge was just holding all the cardboard pieces in place long enough for us to assess what we needed to do. Sometimes you have to solve straight up logic puzzles, like a challenge where MacGyver must figure out how to get the most bang for his buck when he stops at the lab’s snack machine for a chocolate break.

The game plays one to four people, and occasionally even three felt like too much since it was hard for everyone to simultaneously examine the clues. (It would probably be fun solo, but two players might be the ideal number). But when we were all working together, it was great fun figuring out what puzzles required and actually going through the physical motions. There’s only ever one correct solution to the puzzles, but they all seemed fair, logical and achievable. While we opted for untimed for the first go around, we clocked our progress outside the app and managed right around 70 minutes. The preliminary missions reward you with items like the aforementioned crappy mirror, which MacGyver stashes in his utility bag for use in the grand finale. That feeling of group achievement and progress has me excited to continue. I just wish the game was slightly higher quality. Pressman doesn’t seem to have gotten their money’s worth from the MacGyver license with the images in the game looking like low quality screenshots. Having the MacGyver theme or other sounds from the show playing on the website would have also been a nice touch.

Kosmos’ Exit the Game is also meant to be played with one to four players so I tried it solo. There are 10 versions of the series, each designed to be completed in about one or two hours. A companion app provides a timer and a loop of themed background noise, which was mostly the sound of crashing waves in the case of “The Forgotten Island” scenario. This game had an even more impressively absurd concept than MacGyver: you’ve been shipwrecked and woke up on an island where everything is poisonous. If you want to escape before you die of thirst, you need to unlock a boat by solving a series of riddles that open combination locks on a treasure chest, bottle, parrot cage, and numerous other pirate-y items scattered around the space.

You start with a booklet that contains some clues, including a guide to when to flip over cards from a riddle deck. Some of these are solvable riddles, like letter substitutions or a puzzle where you have to spot the different items that appear on two images of the same beach. Once you figure them out, you use a decoder ring to find the number of a corresponding answer card that will lead you to the next step if you’re actually correct. Other riddle cards are just scraps of information useful for later puzzles, though it’s not especially clear which ones.

That’s a big problem. Multiple times I reached for a riddle’s corresponding clue card convinced I was stumped only to discover I needed some heretofore unseen secondary card to solve the puzzle. Having multiple things to examine at any given time would solve the problem I had with MacGyver of too many people trying to focus on one piece of the puzzle at once, but it’s too easy to waste time or feel stuck only to learn you never had a chance to begin with. The clue book is ripped up over the course of the adventure, which could be satisfying but turns out to be a mess to keep track of. Some pieces need to be folded up to complete one section and then used intact later. Also every time I was asked to fold something I did it wrong and could barely manage to get it right even once I’d gotten to the bottom of the three-clue pile and saw how it was supposed to look.

What took me out of the game most was the concept of decks. Escape rooms are supposed to feel immersive and even if I was willing to accept the conceit of combination lock-loving pirates, having to keep track of which cards were in play made the game feel more like a conventional board game. There’s no hard time limit on the Exit games, with your score being determined by how many clues you used and how long you took. Each box only contains one scenario so presumably your group can try to beat their score by facing a different challenge like escaping from an Egyptian tomb or secret lab. But since each use the same off-putting basic mechanics I’m in no rush to try them. There are some more complicated escape room board games designed for bigger groups and I’ll be tackling those for a later column.