Escort quests have long been the popular whipping boy of game mechanics, and yet, they never seem to quite go away. I think that’s because they’re not an inherently bad idea. There comes a time in a lot of games when very few things are going to present a realistic threat to a hero with a different gun’s trigger taped to every muscle he can flex and seven or eight inches of kevlar between them and the world, but give him a three-legged puppy that ate the ultra important secret microfilm to look after and suddenly the whole gameplay dynamic changes. Suddenly you can’t just stand half-in and half-out of the shelter of the nearest pillar and tape down the fire button.

I will say that it is a mechanic that is probably the most frequently mishandled. Amy is a pretty good crash course on how not to do it. I will say that it was at least slightly better than the little girl you were expected to escort in Siren Blood Curse, the one who game-overed you into a skip if she so much as glimpsed a monster, shattering her innocent and unsullied worldview. Sadly Amy can’t bring you much satisfaction if you get bored and leave the flaky moo to get torn apart by the undead, because while the zombies are happy to sock you in the jaw while you mash the dodge button, they don’t actually physically hit Amy. They do this retarded little Force Choke sort of thing and ‘drain her energy’. Presumably because the developers didn’t want to have to run child abuse past the censor. I imagine this would annoy Skyrim modders.

So that’s a bad way to do escort quests. At this point I was trying to think of some hypothetical ideal escort based game, but on reflection, I think Resident Evil 4 sums it up pretty well. Alright, so you have to spend the vast majority of play time dragging the squealy teenage chimp with terrible dress sense around everywhere you go. Alright, whenever she was separated from you she’d stand with her knees knocking together shrilly yelling your name like a clingy jealous girlfriend watching you talk to your ex-wife from across a night club dance floor. But against all those odds, Ashley (for ’twas her name) had a reasonable head on her shoulders, and was never troublesome to escort. She stayed next to you, and when instructed to, stayed exactly where she was (optionally in the nice safe dumpster where she belonged) until you returned. She’d zip behind you the instant you pulled your gun out, and if that wasn’t immediately possible, she’d hit the fucking deck. And the baddies were trying to capture her, not kill her, so even if they grabbed her you’d have a little while to save her from an unwanted fireman’s lift before anything gamed you over.

The point I made in the video is that an escort becomes less appealing the more they try to help. You’ll note that very few people complain about the Companion Cube escort quest in Portal, and Resident Evil 4‘s Ashley was basically a crate that walked by itself. How swiftly technology advances. I guess her overall big strength was that she understood her limitations.

Amy gives the hint in some loading screens that if you don’t constantly hold her hand she’ll wander around the nearby environment and perhaps find you secrets and hints for how to proceed. That sounds great and all, but I’d rather know for 100% certainty where the stupid little shit is at every given moment. And not because I’m fussy or OCD. Because we’re in a hostile environment where the slightest unchecked movement could be spotted by weirdly reliable zombie patrols. Also, if she gets too far away from me I start to fucking die. This is not a situation in which I am in the mood to tolerate you trying to help out with your carefully honed easter egg hunting skills, little lady. 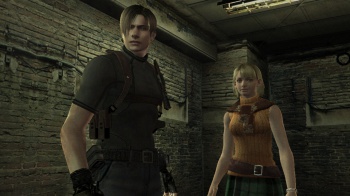 Getting back to Resident Evil 4, I find it useful to compare Ashley to the sidekick of Resident Evil 5. The former a whining, inept, unskilled ball and chain that clings to your back like the monkey she resembles, the latter a smart, sassy professional agent with multiple guns and a kick like a bear trap. But Resident Evil 4 is the better game. Because as much as Ashley didn’t pull her weight, at least she didn’t use up all my fucking ammo and health items shooting at the indestructible carapace of a giant murderous crab.

But that wasn’t technically an escort, that was NPC support. The difference being that an escort is designed as an additional challenge for the player, while NPC support is supposed to aid the player with the challenges. In theory. They do exist on the same plane, because NPC support that has their own health and ammo can swiftly turn into an escort quest. If you can imagine a horizontal line, with efficient, helpful, and unintrusive NPC support on one end and something like the Companion Cube escort level on the other, then the kind of escort mission that gets annoying is directly in the middle of that line.

My first theory for the formula of a successful escort quest is one you don’t really have to pay attention to most of the time, like the ones in Dead Rising 2, but on second thought I realized that in a lot of cases there wouldn’t be a game at all, not when escorts are supposed to be one of the central challenges. I never found the prolonged escort sessions of Ico too hideous, despite having to constantly run after Yorda when shadow monsters were dragging her into the basement. I wanted to look after her because she was a helpless, fragile thing against the big black rowdy bastards.

So my final, updated theory goes that an escort subject remains tolerable as long as you are not expected to rescue them at any point from trouble they put themselves into, despite allegedly possessing the same level of self preservation as every other life form. So basically, don’t have them attack enemies. At all. Like those motherfuckers in Dead Island wading angrily into throngs of beefy zoms with only a sharp stick. Or the lady from Silent Hill 4 whacking slime monsters conjured from the depths of fevered madness with an honest to fucking goodness handbag. Or if you’re leaning more towards NPC support, have them attack, but just don’t let them die. Or at least don’t game over us if they die. No one appreciates being punished for something that totally wasn’t their fault.

Besides, I think a lot of the resentment players have for aggressive escortees and support characters is that having them offer combat assistance gives the unspoken implication that the player needs it. The decrepit old scientist charging at the gathered enemy soldiers swinging a retort stand around his head is saying “Hey, Mr. Heavily Armed Soldier Player Character Man, let me show you how it’s done! We are equally qualified for this job! Wheee! I’ve poured so much fucking coloured liquid from one glass flask into another, now it’s time to put those skills to use!”