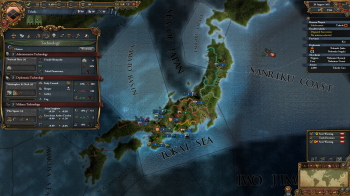 Fans of Paradox Interactive’s flagship franchise will be pleased with Europa Universalis IV, and the few improvements to the nation simulator set in the colonial era are welcome. If you’ve never played EU before, though, it is easy to get discouraged when you start ruling your nation in 1444 A.D. The user interface is full of useful features, but there are hundreds of rules and bits of information to digest and you’ll be hard-pressed to know if the decisions you make will have a positive impact or not. It won’t be long before you lose a war, or suffer some other major setback.

That’s ok, calm down, don’t panic – the joy of EU4 is in the journey. Watching and shaping the alternate history of your nation is exactly the experience the designers want you to have, and EU4 delivers it better than any other game in the series.

EU4 is a real time strategy game in which you control a country from the Middle Ages up until the end of the Napoleonic Wars. You can choose from hundreds of nations to play as – from European powers like England and France to tiny one-province baronies like Orleans. Most of the larger nations have unique properties which aid in replay value. For a great challenge, nothing beats taking a small kingdom like Naples or Scotland and turning it into a superpower, but that will take some serious skill. The AI in singleplayer games is formidable, requiring you to react and grow to keep pace with the larger, stronger nations. There are a few fun choices outside Europe – most notably feudal Japan – but the game is certainly skewed as Euro-centric as the era was. You take over the military, trade and diplomacy of your nation, sending merchants to divert gold to your capitol or annexing territory from your rivals through a royal marriage or conquest. Unlike 4X games such as Civilization or Master of Orion, there are no win conditions in Europa Universalis IV. Sometimes the game gives you missions to raise an army, unite Spain, or kick England off the continent, and these provide fun short term goals, but there’s no way the game ever says you’ve beaten it.

The quantity of different game systems is daunting and discovering how they interact is not always intuitive. A brief tutorial is available, and there’s a hint mode that will give short explanations of basic game terms and concepts when you click on the UI, but you’ll often find yourself running to forums or wikis to fill in the blanks. For example, the 3 monarch point currencies of administrative, diplomatic and military power are extremely valuable. You earn them each month based on the ruling monarch’s stats, modified by many factors such the skills of your hired advisers. While playing I noticed my diplomatic power had a red number, meaning it was negatively modified by something. The tooltip displayed the demarcation “6/4 Diplomatic Relations” but I didn’t know what that meant at first. I later learned through the hint system that nations can only enter into a diplomatic relationship with a finite number of other nations – going over that limit restricts the amount of diplomatic power you earn. Europa Universalis IV is full of game rules which are not immediately obvious.

Even fans of the series will debate whether the way trade is modeled in EU4 works well or not. The map is dotted with trade nodes both in ports and inland hubs, and wealth flows through them simulating trade routes. By assigning merchants to the node, you can either influence trade to flow towards your nation, or collect gold from the power you already exert on the node. The trade system is elegant to behold, and it’s somehow beautiful to witness the snaking lines of money moving across the map. It’s just not very fun. You send your merchants or order your ships to protect trade interests, and that’s it. You just let it run. 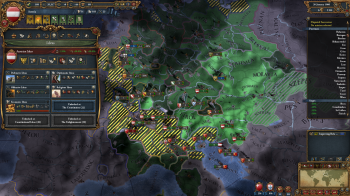 The reliance on random chance to be successful in EU4 can be frustrating. As I said earlier, the quality of your nation’s ruler is a big factor in how many monarch points you earn, and it’s entirely possible to have a king with 0 stats, effectively shutting down the growth of your nation for a generation. Monarch points are used for everything from improving your provinces with buildings to purchasing technologies and powerful national ideas so having a shortage really sucks. You can try to put your weak ruler on the front lines by turning him into a general, hoping he dies gloriously to make way for his more talented heir, but it’s just as likely he’ll survive till he’s 60. Similarly, gaining the advantage in war in EU4 is difficult unless you have a significant numerical superiority. There are just too many factors that could go against your armies, even if you think you are doing everything just right. Is EU4 realistic? Yes. Does the simulation adequately model what it’s like to rule a country and wage war in the era? Probably. Is it fun? Not always.

It helps to think about Europa Universalis IV as playing a story, discovering the alternate history of your nation one year at a time. Successfully bridging RTS and turn-based games, you can choose to fast-forward the simulation to zoom past a peaceful period or slow down and even pause the game in order to consider your next move. Random events occur all the time, often giving a helpful boost or forcing you to choose the lesser of two evils. It’s tempting to “save scum” playing EU4 – that is, reloading an old save when things go south – but it’s ultimately more fun to deal with misfortune as it comes. When rebels rise up just after you declared war on Castille, it’s the test of a good ruler to survive bad luck. And if you can maneuver your forces so the invading Castillians attack the rebel army for you, well, then you get a feather in your cap, your highness.

Playing Europa Universalis IV with friends is surprisingly fun for such a complex strategy game. Paradox made a large number of networking code tweaks so joining a game isn’t too hard. What makes the multiplayer so enjoyable is that many of the game’s frustrating moments are transformed into entertaining stories to tell your comrades and rivals. A buddy backstabbing you by allying with England in declaring war instead of helping you defend your colonies is easier to laugh and scream about than if an AI player did the exact same thing. The only feature missing from EU4 multiplayer is a better chat client and integrated voice support for impromptu war councils.

The last Europa Universalis came out in 2007, so playing the latest title with the updated engine used in cult favorite Crusader Kings 2 is refreshing for those tired of the old graphics. EU4 still feels very similar to its predecessor’s despite the changes to trade and the introduction of monarch points abstracting almost all development and governance. The updates to the user interface were well-needed – having a tab dedicated to reducing revolts is a godsend – and steps have been made to attempt to introduce new players to difficult concepts but the truth is EU4 will still only appeal to a specific type of gamer. It’s up to you to decide if you’re up to the challenge.

If you are, you’ll certainly be rewarded with a satisfying campaign through history, and many, many sleepless nights.

Bottom Line: Europa Universalis IV is a well-constructed simulation of what it’s like to bring through the colonial era. For history buffs and strategy grognards, EU4 delivers an excellent update to a storied franchise, but it may be hard for new players to penetrate its esoteric systems.

Recommendation: If you loved EU3 or Crusader Kings 2, you’ll likely enjoy EU4 even if you argue on forums about rules changes. If you are a strategy newbie or used to winning all the time, I’d recommend a more straightforward game.