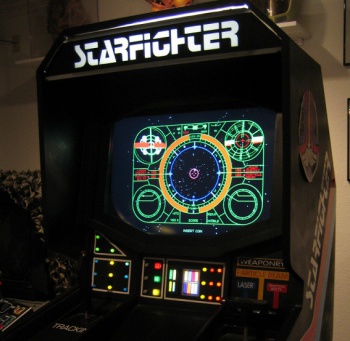 Part of the CCP corporate structure is the freedom to devote a percentage of time to work on side projects, and for a few dedicated developers the dream was to bring EVE to the Oculus Rift. For those unfamiliar, the Oculus Rift is a low cost VR helmet funded by Kickstarter.

Now before you start salivating over seeing a to-scale Titan in 3D or zooming around in your favorite EVE ships, it’s not quite that. It’s a pretty spartan set-up, with players dogfighting in fighters launched from super-carriers, but what it might lack in scope this little demo more than made up in heart.

EVR, the name of the demo, was just a joy to play and absolutely dripped of nostalgia for the yesteryear of games like X-Wing vs Tie Fighter and Wing Commander. I even got a heavy vibe of The Last Starfighter, for those of you old enough to remember that film.

At a press preview, we got the chance to demo the game before it was revealed to the rest of the FanFest conference. In EVR you’re inhabiting the pilot in the first-person, but your head is being independently tracked instead of fixed forward. You can look around your cockpit, see your legs and flight panels, but more importantly is you can look out the canopy of the fighter to see your surroundings. Quite simply, you can be flying in one direction and looking in another just by twisting your head.

An enemy fighter might scream past you, and you can naturally follow it with your eyes, while aligning your fighter for the kill. Each fighter had two weapons, fixed forward lasers and homing missiles. The lasers did a lot of damage, but required the most precision to line-up. The missiles however were just more fun, as they also followed the head tracking. Pulling the missile trigger and then holding your view on an enemy fighter would lock-on to them regardless of their orientation to you, and then you could let them fly to track the target on their own.

Spiraling around in space, flying off at angle to a target that you’re firing missiles at and also while desperately trying to boost and out maneuver enemy missiles was just an unbelievably fun and natural experience.

Currently, EVR is just a proof of concept. There are no plans for it, so far.