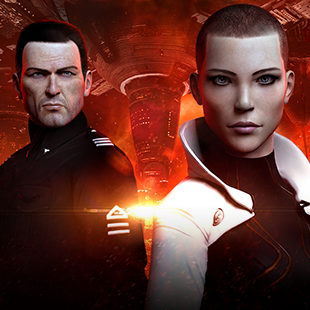 A couple of days back I got the chance to sit down with a few of the fine folks at CCP Games, over the magic of the internet, to get the rundown on EVE: Online‘s latest free and 20th expansion – Rubicon. The expansion is named for an otherwise fairly innocuous river in Italy, most famous for coining the phrase “crossing the Rubicon.” If you’re curious, the origin comes from Julius Caesar’s military crossing the river and is synonymous with going past a point of no return. Likewise, the focus of Rubicon in EVE: Online is about the capsuleers, players, taking even more control of the EVE universe, and in-turn weakening the existing empires. Like other EVE expansions, they all roll out at a steady march to further goals, with the features of Rubicon being the first steps towards a bigger and better EVE sandbox.

At Fanfest this year, Senior Producer Andie Nordgren laid out the future and path for the next several expansions, with the long term goal being players capable of controlling more and making greater decisions in the sandbox, up to eventually expanding out of the known EVE universe with player-created gates. Rubicon will be what starts to set this in motion. Rubicon is to be representative of some of the first moments of when the scales of power tip towards the players.

The first of the newly expanded features are the new Ghosts Sites, which was shown off heavily in the Rubicon trailer. These Ghost Sites play off much of the ground work that was put down in some of the last, more exploration-based expansions. Ghosts Sites are secret research sites that players can find in the universe. While heavily defended, and willing to even self-destruct rather than give up their secrets, these sites will offer a valuable selection of new blueprints, including items not previously available for crafting. The whole set of blueprints will also be spread out across the universe, ensuring that players will need to trade between the various sectors and types of space in EVE, high-security, wormhole, etc. This cleverly forces players to trade between themselves or travel to new areas.

Players will also for the first time, be able to take control of custom’s offices in high security space, previously only capable in lower security zones. Custom’s Office’s control the flow of resources to and from a planet, and most importantly represent a flow of income from the taxes and tariffs to said goods. Players can now destroy the existing custom offices and install a structure of their own. Not only does this allow players another source of income, it also represents increased opportunity for trade competition and conflict. If a rival corporation is constantly undercutting you, making their planets more desirable to set-up industry on, maybe it’s time to declare war, blow up their custom offices and set up your own.

In addition to highsec Custom’s Offices, players will also be able to create a number of new mobile structures designed around allowing players to obtain a greater degree of autonomy. Mobile Depots function as pseudo-base camps even out in deep space by allowing you to store items and refit your ship. Tractor Units will automatically snag your wrecks and loot, while Mobile Cynosural Inhibitors and Mobile Siphon Units are a bit more PVP focused. The Mobile Cynosural Inhibitors stop cynos transiting in the area, so no one can drop ships on you, and Mobile Siphon Units can be set up to leech resources from other player-owned structures. These are designed to be just a taste of bigger things to come.

And it certainly wouldn’t be an expansion without some new ships and balance changes to keep things fresh. The Sisters of EVE faction now offers a pair of new ships for players to command, the Astero frigate and Stratios cruiser. The ships are designed with solo or small group exploration in mind, able to fit covert ops cloaks and featuring bonuses to scanning, hacking and drones. They are potentially useful in a wide variety of roles, though not particularly excelling at any one. The two new vessels have a sleek new design, and I look forward to seeing more Sisters of EVE ships.

Along with new ships comes tuning to the roles and some sweeping changes to warp. Marauder class vessels now have a new Bastion Mode to play around with, turning them into fixed emplacements with bonuses to tanking and damage. There have also been some improvements to the interdictors, electronic attack ships and interceptors. The interceptors and interdictors also greatly benefit from the new warp changes, which now take acceleration into account for moving at warp. Faster ships or ones with specialized roles will reach their warp speed quicker, allowing them to more effectively scout, run from trouble or get the drop on the opposition. I think it’s time for me to go dust off my Ares and zip around for a bit.

This is in addition to a bunch of other changes all over the board. From an overhaul of the certificate system, making it easier for new players to identify what skills they need to fulfill the roles of a certain ship to a new character login screen. It’s no surprise that EVE continues to be one of the only MMOs to be steadily climbing in subscribers. These might not seems like big sweeping changes to the outside observer, but they continue to march EVE to its goal of being a richer sandbox filled with player agency and exploding internet spaceships.