Every time that Chris Nordgren hears a song from the Final Fantasy series, he wants to create a JRPG-style game. He and Jordi Roca are the development duo over at Foreign Gnomes, the creator of Everhood. Nordgren saw Roca post a GIF of a mobile puzzle game he was working on at the time and told Roca that he’d like to redraw the art himself.

Roca thought, “Why the hell does this guy want to redraw my art?”

Nordgren wanted to add more contrast to the art in order to make it more reactive to player input and perhaps also reach a broader audience. Ultimately, Roca told Nordgren that he didn’t like his approach when it came to providing feedback on his original art. Nordgren recalled, “I’m glad he looked past that and got in touch later to create the (J)RPG project that eventually became Everhood!”

After that interaction, Nordgren and Roca parted ways. Several months later, while listening to Final Fantasy’s soundtrack, Nordgren felt the urge once again to create a game. His intention at first was just to create some cool art, but Roca also mentioned that he was interested in helping. Roca started making prototypes, mostly focused on mobile games because that was his background at LittleStone games. However, the mobile platform didn’t fit what Nordgren was trying to do.

“The mobile market is interesting, but it felt like an area that required a specific set of skills and I didn’t feel like mobile platforms aligned with the original ‘let’s create a Final Fantasy game’ idea,” he said. Thus, the road to developing Everhood began.

Nordgren currently works as a full-time artist at Mojang on the Minecraft Dungeons team, and so his time was limited. Roca also needed to work as a freelance contractor to earn money. They both agreed that if they were to create a game on their own, then it would have to be something that didn’t directly compete with the games they worked on during their day jobs.

While Roca made impressive prototypes that spanned many different genres, the final product had to be something that hasn’t been made before, something new. During development Nordgren made a video mockup of what he thought combat would look like, a battle system that was intertwined with the game’s music like a playable music video. They both thought it was unique and something that they hadn’t seen anyone else do.

They both knew that creating Everhood would take up a substantial amount of time, so they decided early on to start small and try to assess if what they had created was actually a good game. They released a demo in 2018 that had the look and feel of a finished product and then released it for free to see if players enjoyed it. “The Everhood Vertical Slice Demo got a lot of attention,” said Nordgren. “It wasn’t massive, but it was enough to show Jordi and I that this could be a successful product.”

The feedback from the demo was positive, with most of the comments just pleading for the developers to make more of it. Building on the foundation and adding interesting story moments, they re-released the demo about a year and half later with some new mechanics. One noteworthy mechanic was what they called “Roll Jump Stun,” which gave players three evasive moves.

First, there is sideways movement, the safest and easiest option. Second, jumping gives the player a brief invulnerability against certain attacks. And third, roll jumping is both easy and safe, while also granting invulnerability. However, roll jumping comes with a stun effect that lasts between 0.05 and 0.1 seconds, leaving main character Red vulnerable.

Nordgren explained, “If it wasn’t for the Roll Jump Stun, players would have just roll jumped through the entire game. I know because that’s exactly what I did for an entire year of development! It’s not bad – it was just too easy.”

Unfortunately, Nordgren was diagnosed with type 1 diabetes in May 2019 during production. Although the disease wasn’t the main problem, he had been undiagnosed for more than a year and kept experiencing awful pain that was affecting his ability to do basic tasks and focus on his full-time job. Production halted for a few months. At that point, Everhood hadn’t been tested and Roca thought the game was about 60-80% complete.

Roca took over overall development while Nordgren was trying to figure out how to deal with the pain. Around this time, Everhood’s second act, which starts when players finally recover Red’s missing arm, was proposed, primarily because he was sick and unable to work properly. The second act allowed them to repurpose many of the existing assets and content they had already created. “Ironically, this was the hardest challenge for us,” said Nordgren. “Implementing and pulling off the second act took so much discussion and playtesting to get it right.”

He began to recover after 10 months or so, and he started becoming more ambitious and adding more polished details to the game. While getting Everhood ready for release, their marketing partner, Stride PR, advised them that they shouldn’t launch around the December and Christmas time frame. It was considered the worst possible time, as they would have to compete with other big titles. They took the advice and used the extra time to polish up the Nintendo Switch version of the game.

“Every week that passed made the game become so much better,“ Nordgren recalled. Originally, Everhood only had one ending. It has more than five endings now, all of which they wrote, designed, and implemented after choosing to delay the initial Q4 2020 release window.

“Every indie game project is a whirlwind roller coaster of emotions,” said Nordgren. “The highs are so high and the lows are so low. But there was no way we were abandoning Everhood.” 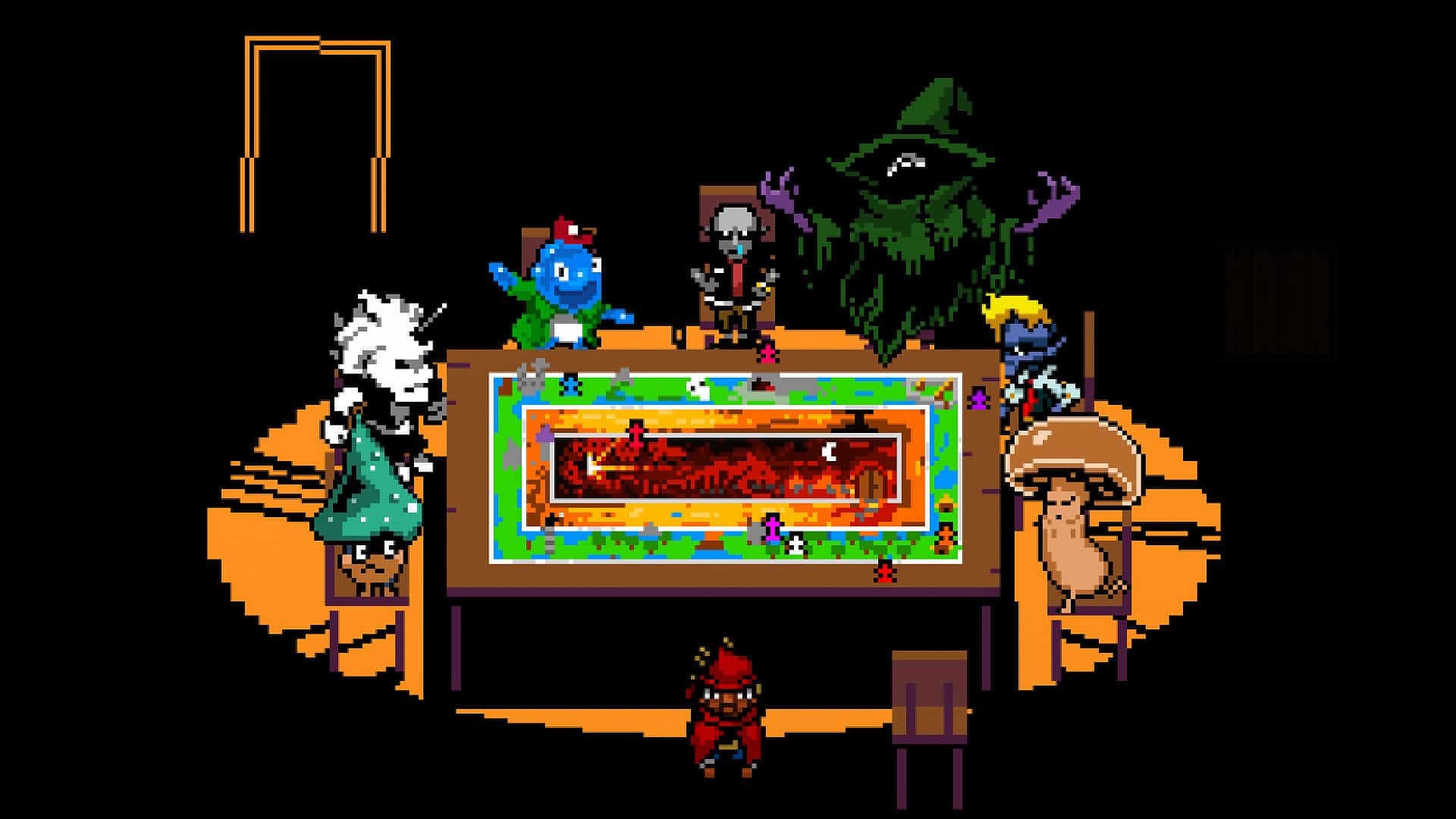 Their approach to the game’s art style was to maximize the overall appeal with the least amount of effort so that they could focus on the aspects of the game that required the most development attention. In their case, it was testing the game that ate up the most time, making sure that every situation or problem players encountered was intriguing and entertaining without becoming obvious.

“I think it all just boils down to interesting encounters,” Nordgren said. “We just wanted to keep players guessing throughout the experience, but at the same time, we wanted every character to be consistent within the world.”

Comparisons between Everhood and Toby Fox’s beloved Undertale are not unfounded. Nordgren recalled, “I remembered how much I hated Undertale. I’m kidding… but, at least as a visual artist, I viewed it as a giant middle finger to my expertise at one time.” However, while working on Everhood, he eventually realized how much depth Undertale had, and it had taught him a lot about video game production.

Fox’s influence even extends to the creative process behind Everhood’s music. Nordgren noted that when creating the game’s music, he followed Fox’s suggestion to listen to some songs he had listed in an interview he saw on the internet. Nordgren composed roughly half of the game’s music, but he argues that the most notable songs are the ones that were created by guest artists like KM_EXP, Lewmoth, Lolita as Roxy, Jayman, ROZKOL, and Cazok.

“We reached out to artists mainly when we had a certain battle in mind,” he said. “Some of the compositions were already done, while some artists created their songs or modified them for Everhood!”

While he couldn’t speak for the guest artists’ influences, Nordgren said that English psychedelic electronic music trio Shpongle was the main influence for certain tracks and the overall tone of Everhood’s story.

During the last weeks before launch, they found an opportunity to add custom battles to Everhood to the PC version of the game. They intend to support the feature for a long time as there’s so much to discover within the gameplay mechanics. They had worked overtime in order to implement it.

Roca’s workload was split evenly between his efforts on LittleStone Games’ mobile titles and Everhood. Whenever a major milestone was hit in Everhood, he’d put in extra effort. “Jumping from one project to another was like breathing fresh air – both are completely different markets,” said Roca. “Sometimes I’d get frustrated with one project and jump directly to the next.”

He added, “The problem with Everhood is that I never got frustrated. It was too much fun to let it go.”

Everhood launched earlier this month on March 4, and right now the duo’s priorities are focused on the custom battle editor and adding more languages to the game. They are open to physical copies for the game if there’s a demand for it as well. Although creating DLC or new content doesn’t make sense to them, it’s not something they’re completely ruling out.

“There are still aspects of Everhood that are appealing and plenty of stories to be explored if we gave ourselves some time to work on them,” Nordgren explained. “I don’t know if adding an additional price tag for extra story content is the right decision, though.”

He concluded, “But what I can say is that I am eager to start on the next project from Foreign Gnomes!”