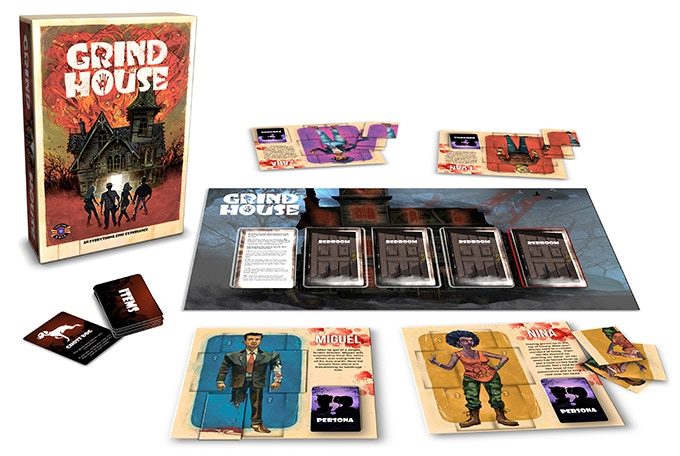 In honor of Halloween, I’m dedicating all of this month’s Table Talk stories to horror games. The genre is just as popular in tabletop as it is in video games or film, and I had huge number of board games filled with monsters, murder, and madness to choose from so expect to see more horror game coverage even after October.

Everything Epic’s Grind House is a tribute to splatter films set on Halloween, with each player taking on the role of a desperate sucker willing to accept an invitation to a haunted house party held at an old mansion that was the scene of a grisly murder. The mysterious host is offering $10 million to anyone who will stay at the house for 12 hours, and each character has their own reason for really needing the money. These range from the mundane, like gambling debts the mob is going to collect on, to the bizarre, like wanting to buy back your soul from a cell phone provider.

The characters find themselves locked in the house and forced to proceed through a series of four randomly chosen rooms and a particularly terrible final room. Each room is represented by a card and the active player reads the description, often requiring all the players to make some sort of choice about how to proceed without having all the information. Our first room was the Dining Room, where each player had to choose where to sit at a table by choosing evens or odds. After everyone made their choice, the active player rolled a die and got an odd result. Everyone who chose odd had to sever one of their characters’ limbs and feed it to a character who chose even.

There are multiple versions of each room, so even knowing you’re about to go into the Dining Room can’t actually prepare you for what’s in store. In another version, players had to decide whether or not to drink some punch and then a die roll determined whether the punch was innocuous, poisoned, or actually an antidote to poison they’d previously been injected with.

Every character card shows an intact person, but the game comes with a stack of pieces that are layered on top to indicate either wounded or severed body parts. If a character loses all their limbs, they have to start taking damage to their head or torso. If they take two wounds to either, they die. The second head wound is represented by a blood spurting neck which makes it disappointing that the second torso one is just a skull over their wounded abdomen. While most characters will die through progressive amputation, some cards can just be immediately lethal. It might have seemed like I got the better end of the Dining Room, but I took one torso damage for each limb I ate and died instantly. Apparently I just wasn’t cut out for cannibalism.

Aside from their motivations, the six characters are statistically identical. Players do have a choice between two Persona cards to give them a competitive edge. I picked the Related persona, which meant the player to my right was my cousin and if we both lived through the game, we would get bonus points. It wasn’t particularly fair to our third player, though it’s hard to sympathize with him when it turned out he’d taken the persona Host’s Assistant meaning he was actually a survivor of a previous version of this macabre game and would win if he was ever the only person left alive. Normally the sole survivor still needs to continue through the game’s gauntlet of horrors and try to make it out.

This is a haunted house, and dead characters come back as ghosts with their own victory conditions. I got to roll at the end of every room to try to heal my cousin or hurt his opponent and if he survived, I’d still be considered a winner. If the Host’s Assistant is killed, they’ll deal extra injuries to two survivors at the end of each room and still be considered victorious if everyone dies. Otherwise everyone loses as soon as the Host’s killed everyone. If multiple people survive, they add up points based on their intact limbs and secret Persona objectives.

Players also get to choose between two items at the start of the game meant to help them, though some of these are too niche to be useful and others are always bad. I had a holy cross capable of keeping ghosts from affecting me but considering I was the first to die it never came up. If you draw the voodoo doll during item selection you have to keep it, taking a wound at the end of each room and then passing it to another character like the world’s nastiest hot potato. Others are just great like the antidote, which can be used at any time to heal an injury.

The game is almost entirely luck based, but the flavor is great, powered by absurd concepts like a lethal game of “The Hokey Pokey.” Grind House also doesn’t overstay its welcome, taking about 30 minutes to learn and play. We only played with three people but I think it would be better the closer you could come to its six-player max since that would provide more ways for people to mess with each other while alive and as ghosts.

Everything Epic raised funds for several expansions on Kickstarter that take the game out of its base Saw-like setting and pit the characters against Lovecraftian horror or an evil carnival. There’s also a Krampus scenario so you can bring some horror to your holiday party. Grind House isn’t going to satisfy gamers looking for a serious or strategy game, but like the movies it’s based on, it’s sure to provide some laughter and shocks.