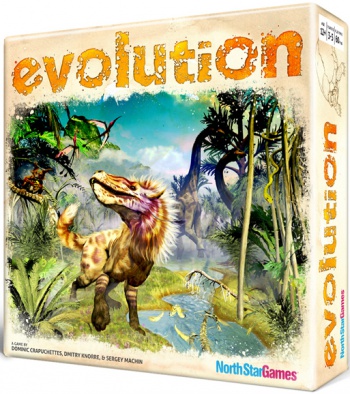 First published by Rightgames in 2010, Evolution is a strategy card game of evolving species in which players compete to keep their portfolio of species alive and well the longest. Now, American publisher North Star Games is Kickstarting a new and revised edition. We spent some time with a prototype copy of the new game using final rules, and were quite happy to report that it’s not only a lot of fun, but surprisingly deep and full of interesting choices. Fans of strategy and resource management games will find a lot to love here. Beyond that, it’s a very approachable game – I think you could set it alongside a game like Settlers of Catan as an introduction to gaming for non-gamers. Set that alongside its suite of pretty art and imaginary animals, and Evolution deserves a look.

In Evolution, players manage their suite of active species, trying to keep each fed and adapted to the current ecosystem. Each turn, players draw a number of cards dependent on how many species they have on the field. Those cards represent a trait, but also have a value that adds food to the available ecosystem. After playing cards face down to add food to the available pool, the real fun begins. Players then take turns using the cards in their hands as both currency and upgrades: Discarding them to make your existing species bigger or more populous, or to bring new species into play. Alternately, you can use the printed trait on the card to upgrade your various species. Those traits are things like a shell that makes them harder for carnivores to kill, cooperative behavior that gives food to your other species, or rolls of body fat to store food. In preview play, we immediately discarded the turn-based card playing rules in favor of all playing our cards simultaneously – a “Fast Play” variant found in the rules – and not only was the game faster, it wasn’t too different. That’s nice, since not all players are going to be interested in the deep strategy of the game – though with your most competitive friends it would be worth it to take turns. 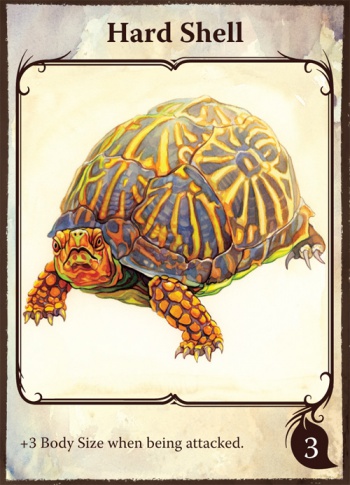 Once everyone has played cards, you reveal those secret cards you played for their food value – remember those? They dictate how many plant food cubes go in the middle. Now you know how much food is available, and you go around the table “feeding” a single species you control. Alternately, if you’ve got a carnivorous species you make it prey on an opponent’s smaller species to decrease their population and feed your species cubes of meat. At the end of feeding – when there’s nothing left – the species that didn’t eat enough to maintain their populations either die off if they didn’t eat at all, or die back to the level that the ecosystem sustained them. Then, the cubes of food your species ate go into your secret scoring bag – the number of food cubes in each bag at the end of the game determines who won.

The choices you make every turn are distinctly satisfying. What will each card you spend be spent on? Which kinds of traits will you exploit before destroying, and which will you keep in the long term? Will you gamble on a few carnivores, or try to defend your herbivores from predators? Most of the choices are straightforward, but the random card draws keep the game varied while not being punishingly uncontrollable. Of the games we played, I can say that the mechanical base of Evolution is solid. It’s fun over several plays, and caters well to a variety of players. If the idea intrigues you and you’re on the fence, I can say that the gameplay is solid enough to warrant your participation in on the Kickstarter. This is North Star Games’ first Kickstarter, but it’s worth noting that they’re an established publisher with a history of delivering games. I expect to add Evolution to my permanent collection when I get my hands on a copy. Its funding campaign ends Monday, June 16th.