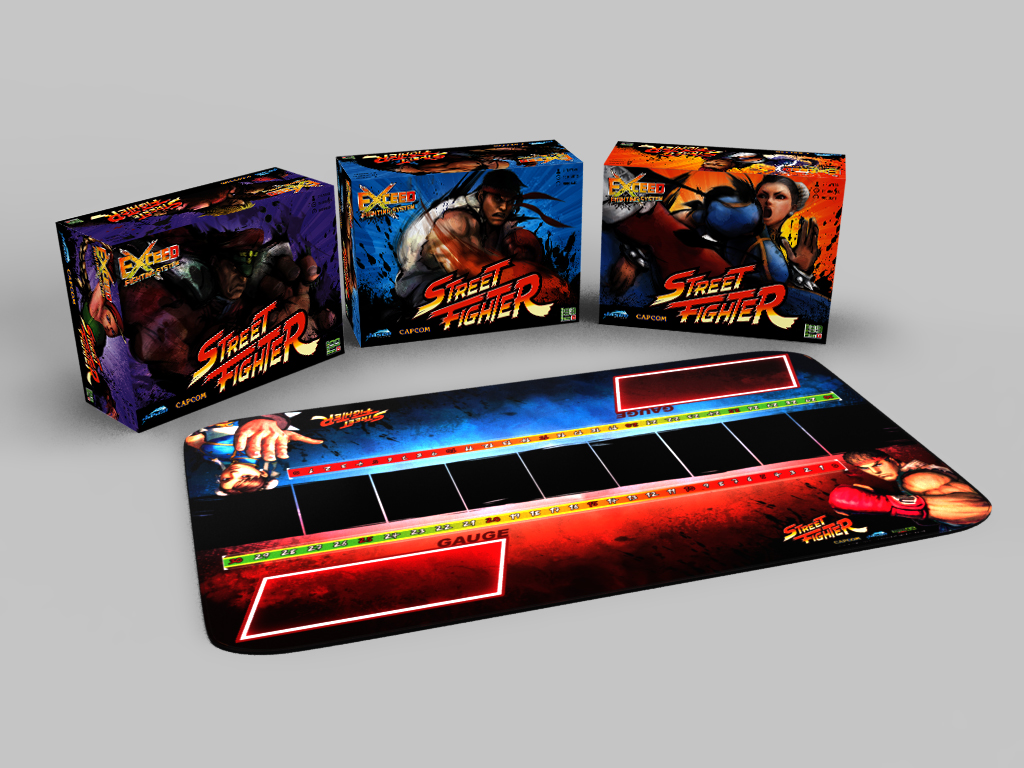 Sagat was in bad shape. Ryu had just hit him squarely with a Hadoken and was ready to do it again. The Muay Thai expert tried to regain momentum with one of his own signature ranged attacks, Low Tiger Shot.

“Well it’s slower,” I pointed out.

He sighed, looking at his hand. “I’m going to need a different strategy.”

Our duel between two of Street Fighter’s most iconic characters wasn’t playing out on our TV but at our dining room table thanks to Level 99’s Exceed Street Fighter. The two-player card game simulates the feel of a one-on-one fighting game without requiring any of the fast reflexes or manual dexterity needed to execute the right move at the right time. Instead, victory is based on knowing what your fighter and your opponent are capable of, anticipating their actions, and understanding when to gather strength and when to go on the offensive.

There have been two previous Exceed games simulating fights between characters in much more minor properties: Red Horizon and Seventh Cross. While the basic mechanics that hold across the whole line weren’t designed for Street Fighter, they fit the game perfectly. Players move their characters across a small battlefield, closing in for short strikes, jumping over their opponents, retreating to make ranged attacks, and sometimes even pushing or pulling their opponent into the position they want. Each fighter is represented by a deck of 30 cards about evenly divided into basic moves everyone can do like Block or Dive and special moves unique to a given fighter like Sagat’s Tiger Uppercut or Chun-Li’s Lightning Legs. The goal is to hit with enough attacks to take your opponent’s life total from 30 to 0.

Each card can be played as either a Strike or a Boost, which is meant to keep players from getting unlucky by having the wrong mix. Level 99 also used that design strategy to great effect in Pixel Tactics, which emulates old school turn-based strategy games. Exceed Street Fighter’s Boosts can provide an immediate effect like letting you move away from your opponent or draw extra cards, give a static bonus to your stats that sticks around until the next strike is played, or offer some added bonus the next time you hit. Some let you attack your opponent in different ways by forcing them to discard cards or boosts. Since you also lose if you run out your deck twice — not unlike when time runs out in an actual Street Fighter match — you want to play your boosts conservatively to make sure you get value from them rather than riding too much on the next fight, when you might get unlucky or outplayed. The best Boosts are also often the same cards as the best Strikes, forcing players to regularly make tough decisions about how best to use them. I tended to lay down defensive boosts as soon as I drew them to protect myself, saving offensive ones for clutch situations or the turn before I made an attack I felt confident about so as not to telegraph my plans too clearly or waste too many resources.

When one player declares a Strike, both players put a card face down representing which move they’re going to use. Then they reveal what they’ve chosen at the same time and resolve the result. Speed is often the most important stat as it determines who goes first. If the other player takes more damage than they have guard points, they’re stunned and don’t get to attack. The second player also might lose their action if an effect moves them or their opponent out of range of whatever attack was played. Many times I found myself regretting taking the Strike action when I walked into a counter that was faster than my attack and finding myself stunned. Some characters like Ryu have a deck full of cards that are more powerful if they’re on the defense. But if you play it right, an attack can damage your opponent and give you Advantage, meaning you get to play an extra turn.

A successful strike also adds a card to your Gauge section, which is used to power some of your biggest attacks and boosts and flip your fighter into its Exceed mode, which powers up it’s basic ability. For instance Sagat at base can telegraph his movements, playing his Strike cards face up for +1 Speed. Flipped onto his Exceed side, he also gains +1 Power whenever he makes it clear exactly what he’s about to do.

Some characters are better at filling their gauge than others and tend to feel much more powerful as a result. The highly aggressive villain M. Bison can discard cards from his hand straight to the Gauge section. The first time I fought him, my husband used this ability to unleash a series of brutal attacks while I never once managed to pull off Ken’s Shinryuken. Shouting the names of these moves isn’t required by the game, but we definitely had a lot of fun doing it. I’ve never been particularly good at fighting games, my passable button-mashing skills failing when matched with a hard AI or a more experienced human opponent. The complex sequences of button pressing required to intentionally execute powerful moves have typically been as foreign to me as playing piano. It’s a skill I respect and could potentially gain through time and practice, but it’s never been a priority. Making the process solely intellectual certainly takes the immediate thrill out of a bout but Street Fighter Exceed made me feel like I knew the Street Fighter characters better than I ever had when clumsily trying to play them on a screen. And it gave me the same competitive thrill where I could enjoy executing a powerful attack, coming up with the perfect counter, and the tension of a close match where the next blow could decide everything.

Exceed Street Fighter also has a tag team mode where players each pick two fighters and shuffle their decks together. General cards can be played by either character, but special ones can only be played if the corresponding fighter is active, which requires taking an action to tag them in. Each fighter only has 20 life and the player loses if either of them gets knocked out. It can add more chaos and strategy to the game as players have to decide which fighter is the best to use for their current situation and anticipate the effects their actions will have in a game that could change very quickly. Some heroes that are weak fighting solo seem to work particularly well in this mode. Chun-Li’s power to move back one space every time I played a boost isn’t impressive on its own, but it worked well when I combined her with Vega who wants to be pressed against the border of the arena so he can charge his opponent with a devastating attack. While the game is best balanced for solo play, I enjoy tag team because it lets you get to know multiple characters and makes it even more difficult to try to card count and figure out what your opponent still has access to.

There are three different versions of Exceed Street Fighter, each containing four fighter decks. While you can play with just one box, you’ll need multiple to get all the fan favorite characters. I also anticipate players having a lot of debates about what decks are fair to play against each other. While they each have different tactics that could be mastered and worked around, it’s hard to make up for the fact that some characters have significantly stronger abilities. But debating about who’s overpowered and who’s just played better means Exceed Street Fighter has nailed another one of the quintessential fighting game experiences.

Street Fighter has been struggling as a video game franchise, working to reach players outside its hardcore base by loaning a host of characters to Super Smash Bros. Ultimate. Giving Level 99 the license to make a card game based on the characters is another clever move by Capcom. Fond memories might get tabletop-focused gamers to try Exceed Street Fighter, but it’s charm goes beyond nostalgia. It stands up on as its own with high replayability thanks to the wide variety of combinations that can be created with different fighters and the challenge created by mastering the strategies needed to fight with and against each character. The basic rules are easy to teach to someone new and while there’s sure to be some experience gap it’s unlikely to be nearly as wide as the gulf that can exist in an actual fighting game. That feeling of fairness might be the game’s greatest strength. It’s a lot harder to love something if your only memory of it is losing.

The Dumbest Thing In Star Wars?

The Myth of the Grim and Gritty Batman