So the portrayal of women in games has become a hot topic again, partly because of the Tomb Raidermolestation charges and that incredibly shameful Kickstarter incident. And this is a good thing, because even if the forum arguments endlessly circle the same drain as always, as long as the topic at least remains at the forefront of our conscious minds it becomes more likely that the problem will be addressed.

I actually kind of regretted bringing it up in my Zero Punctuation review of Lollipop Chainsaw, because I don’t think any of the characters in that game can be taken seriously enough for the gender politics to be an issue. Yes, Juliet Starling is incredibly sexualized in appearance, but she can’t be considered either desirable to men or emulatable by women because she’s fucking nuts and demonstrates her affection for boys by carrying their disembodied heads around.

But anyway, inequality is a capital-letters Bad Thing. Well, “bad” might not be the right word. “Irrational” is better. And videogames can’t take the whole blame for it, what with the volcanic quantities of movies that fail the Bechdel test and basically the entirety of human culture as a whole. But let’s face it, videogames is possibly the medium in which it gets the most out of hand. Except maybe comic books. Our industry of choice might not have invented the string bikini, but we are the ones who persistently pretend that it’s appropriate battle dress as we position the camera directly behind the heroine’s wiggling bum.

Never attribute to malice what can easily be attributed to stupidity, and don’t attribute Ivy from Soul Calibur‘s probably very armored underpants to some innate misogyny or conscious belief that every feminine thing in the universe exists to be jerked off to. The audience gets what it deserves, after all; tits only persist because more people have been proven to buy them, and big companies can be trusted only to emotionlessly take the path of least financial resistance. But the ridiculous underdressing of videogame females is just a symptom of the mainstream industry’s big underlying problem. The root of almost every issue I have with triple-A release standards. The shadowy figure lurking behind Ivy’s tits, War from Darksiders‘ stupid fucking armor, and the persistent nuking of major European cities in realistic war games. It’s excess. That’s the big problem. Excess, and the mindless pursuit of it.

And this issue goes deep, into the very grain of videogames. The pursuit of excess has been with videogaming throughout its entire evolution, and it’s always difficult to rid ourselves of such basic, instinctual things, in the same way human beings will probably never shake off instinctual racism or the tendency to eat one’s own snot. The pursuit of excess is an inevitable result of videogames being so closely tied to the cutting edge of technological development. 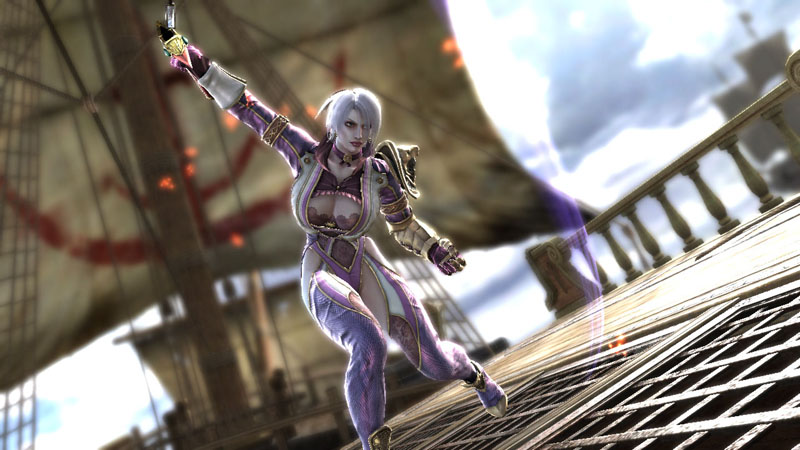 The first home consoles rendered graphics that can be fairly faithfully reproduced by arranging Weetabixes on a dining table. When your user base can count the pixels on the screen from fifty paces then the obvious step when marketing a rival product is that it can render more Weetabixes than its dowdy old predecessor. And the only way you’re going to bring that across is to have games that push the new Weetabix capacity to its limits. Last generation we could only show one pixel firework exploding at a time, but with the added new Shredded Wheat processor, now we can have TWO. Perhaps even THREE. In a hypothetical future generation we picture limitless fireworks flying out of the player character’s bum on command. Buy it, you rabble.

The equivalent of this would be if the film industry had existed as it does now right from the moment some enterprising photographer first stitched together several snapshots he’d taken of a horse in full gallop. And if some competitor had developed a horse animation entirely separately that could only work with their own, in-house developed zoetrope. And if most of the audience was only prepared to buy one kind of zoetrope, creating a sense of idiotic rivalry between the buyers of one kind of zoetrope and the buyers of the other, which would only fan the flames further as users demanded that their zoetrope have more frames and more sparkly bits and ribbons than that other sod’s zoetrope, regardless of the actual quality of the animation or handsomeness of the horse.

What this has left us with, a handful of decades down the line, is an industry built entirely around the sparkly zoetrope ribbons, and where everything must be more excessive than whatever came before it. If the first game was a Mario World or an Arkham Asylum then the next one has to be Mario GALAXY and Arkham MULTIVERSE. If Kratos murders the fuck out of a hydra at the start of God of War 1 then by God of War 3 he has to murder the DOUBLE FUCK out of a dude the size of a soberly-proportioned gas giant. Everything has to be big and bombastic and preferably exploding to show off all the untold billions of Weetabixes we can support nowadays.

But what has this got to do with ladies’ butts and nuking Paris, Croshaw? Well, gaming technology’s rise has somewhat levelled out as far as rendering capability is concerned, and we’ve reached the point that planets exploding into a trillion individually-rendered particles doesn’t provoke oohs and ahs the way it used to. Ten Weetabixes is markedly and obviously different to one Weetabix, but a hundred million Weetabixes and a thousand million Weetabixes are pretty much the same at first glance, and adding more Weetabixes won’t improve matters. The load has, as they say, been blown. But the pursuit of excess is still the industry’s first instinct, and since explosions alone can’t cut it anymore, every other aspect of videogames moves to fill the gap.

So now it affects character design, too. If a lady character was showing slightly excessive amounts of skin in Soul Calibur N then she’ll be wearing about enough material to make a coat for her Yorkshire terrier in Soul Calibur N+1. And what about plot? You start with Russian mercenaries committing atrocities and that turns into ALL THE RUSSIANS invading EVERYWHERE AT ONCE a few games down the line. Things that might start in a small way, but if they gain enough attention, they explode the first chance they get. Because it’s the baby who knows he’s getting attention who throws the most mashed apple around, and attention is all that seems to matter.

Well, that’s my theory of the week, anyway. And if it’s true, then hopefully the pursuit of excess is a temporary thing. All it takes is for the indie circles to keep putting out hits like Amnesia or Minecraft that manage to get the attention everyone seems to want while still retaining subtlety and simplicity, and – perhaps most importantly – that don’t cost millions to develop. Eventually publishers have got to understand that the only excess that’s guaranteed to work is being excessively good.