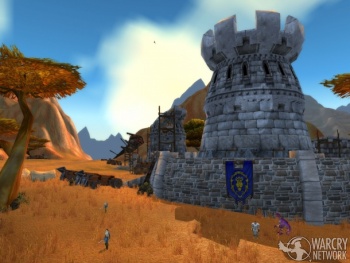 For our ongoing coverage of World of Warcraft: Cataclysm, we recently sat down with game designers Dave Kosak and Roman Marotte to ask them about the work they’ve done on the Southern Barrens, a once-familiar place drastically altered by Deathwing’s return and the continuing struggle between the Horde and the Alliance.

Q. What was the original concept for the zone?

A. The Barrens is one of the areas of Kalimdor hardest-hit by the Cataclysm. It has literally been ripped in two! The Northern Barrens retains much of the feel of the original zone and fulfills a similar gameplay purpose: it’s primarily a training ground for low-level Horde characters. That gave us enormous freedom to create a whole new gameplay experience for the Southern Barrens. In the wake of the Cataclysm, the Alliance has been aggressively expanding into the heart of the continent from the east coast. As players enter the zone, they’ll find that the Horde is really up against the ropes. The escalating conflict between the two rival factions is front and center here, providing a backdrop for much of the area’s quests.
Q. Who will be using this zone (what levels/factions)?

A. The Southern Barrens is geared toward Alliance and Horde characters from levels 30-35.

Q. Without giving up any spoilers, what’s the general storyline for this zone? How has it changed from the original design?

A. “An eye for an eye” is the theme, with each side taking and losing ground, descending deeper and deeper into violent conflict. From the Horde perspective, players will learn the grim fate of Camp Taurajo and Honor’s Stand. It’s then up to the players to rally their faction’s disorganized forces, initiate a change in local leadership, and avenge the sacking of Taurajo. The Alliance, meanwhile, struggles to hold on to recent gains, fending off attacks from all fronts. Players will also fight to save Northwatch Hold from the brink of capture and keep the roadways from Theramore open. Additionally, both factions have to deal with the explosive growth of a strange new jungle spreading across the Barrens. This is all entirely new content for the expansion.

Q. What do you think is the most exciting new addition to or feature of the zone?

A. Definitely the Alliance/Horde conflict, which really comes alive in the Southern Barrens. We tried to give players the feeling of participating in large PvP-style conflicts, even if they’re playing solo. Alliance and Horde members will struggle to capture and defend key points of the battlefield against waves of enemy troops. New technology will allow players to experience the story in ways they never could have prior to Cataclysm. For example, the Horde assault on the fortress at Bael Modan, and its aftermath, should really pull players into the action by showing dramatic changes in the world.

Q. What goes into redesigning a zone like this?

A. The Southern Barrens was a complete rework, so we really started from scratch, identifying the key areas of contention and then building a short storyline around each one. To accentuate the conflict, battles continually rage in hot spots around the zone. Finally, we put together a quest structure that throws players into the thick of those engagements. We invested a lot of effort into infusing the right emotions into the zone. If you’re a Horde player, for instance, we want you to be completely outraged by what happened at Taurajo!

Q. So what has happened at Camp Taurajo? It appears to be in ruins.

A. That depends on whom you ask! Alliance players can speak to General Hawthorne at Forward Command and discover his reasoning for removing Taurajo from the Horde arsenal. On the other hand, if you speak to the various Horde leaders at Hunter’s Hill, Camp Una’fe, or Vendetta Point, you’ll hear a very different version of events. We suspect that debate over the ethics of this one will rage for some time.

Q. What was the most challenging aspect about implementing so many changes to an existing zone?

A. It was a real challenge getting the story to flow organically from the start of the zone to the climax. Key NPCs move around and are killed during the fighting; that’s always tricky to pull off.

Q. What should players do or go see first?

A. Alliance players will definitely want to get to Northwatch Hold as soon as possible: it’s about to fall to the Horde! Likewise, Horde players should check out the utter devastation at Taurajo. Someone … has got … to pay.

Q. Why is the Great Gate barring entry to and from the Barrens and Mulgore?
A. The Horde built the Great Gate in reaction to Alliance aggression from Dustwallow Marsh, including the construction of a highway running from Theramore straight to the Barrens. The gate was finished just in time: Alliance forces had penetrated all the way to the entrance of Mulgore, and the gate slowed them down long enough for the Horde to rally and launch a counterattack (with the player’s help, of course!).

Q. Will you explain a bit about the emergence of the Overgrowth and the new Horde Camp Una’fe?

A. Players may be familiar with the story of Naralex, the ambitious druid who tried to reinvigorate the springs of the Wailing Caverns to return the Barrens to the lush expanse that it once was. His story continues in the Southern Barrens as he tries to contain and cope with the unintended consequences of his near-fatal exposure to the Emerald Nightmare. The uncontrolled growth in this part of the Barrens threatens the Alliance and the Horde alike. Teegan’s Expedition in the east is stymied in its attempts to get Alliance supplies to the front, while at Camp Una’fe to the west, Taurajo’s survivors find themselves overwhelmed as well.

Q. What are the Alliance forces at Forward Command and Fort Triumph and the Horde forces at Desolation Hold hoping to accomplish in the Southern Barrens by vying for control of the Battlescar?

A. Geography defines the conflict here. The Battlescar sits in the middle of a narrow pass, a natural bottleneck. The Alliance needs to blast its way through here in order to maintain an overland link between Theramore and Northwatch Hold, not to mention a route into the Stonetalon Mountains, where the Alliance can lend aid to its allies. If the Horde can seal off this pass, then Theramore will essentially be isolated. The conflict comes to a head in the Battlescar… and the future of Kalimdor may hinge on the outcome.

Thank you, gentlemen, for taking the time to discuss the work you’ve done to breathe new life and adventure into the Southern Barrens for World of Warcraft: Cataclysm!