I admit I went into watching the pilot episode of Extant (CBS, Wednesdays @ 9pm) with very low expectations. Between Halle Berry, Steven Spielberg and CBS, this 13-episode summer series had bland written all over it. And the trailers I saw in the advance didn’t do anything to help that perception. But damn if this first hour didn’t suck me in from the get go and leave me wanting more with its subtle writing, convincing performances and film-quality effects.

Set in the near future of self-driving cars and clear glass computer tablets, Halle Berry plays Molly Woods, an astronaut who has just returned from 13 months of solo scientific study on the privately-owned space station Seraphim. She’s having trouble readjusting to her Earth-bound life. Not only is she feeling physically ill, but she can’t seem to reconnect with her son or her husband. And in case that’s not enough, there’s someone stalking her outside her house.

A routine medical check up reveals that she’s pregnant and by the timing of it, it had to happen on the spacecraft. This is impossible since A) she’s infertile and B) she was up there by herself. We learn through flashbacks that during a solar flare that reduced the space station to emergency power, she saw her dead ex-husband on the craft and he seduced her. When she reviewed the camera footage she saw that he was never on the ship, just her reacting to thin air, so she deleted the cam footage. She lies and says she simply spent the time working to get the systems back online and took a nap, but her boss is suspicious of her explanation.

Her boss then meets with a Japanese mogul who just got out of some kind of stasis chamber. It’s intimated that what happened to her on the space station was an experiment and they want to know what happened during those 13 hours of missing time. Also: this the second experiment, as the first ended with an astronaut who took his life after he returned to Earth. Oops.

Back at home, Molly isn’t having a great time with her son who is an android programmed to approximate human emotion and to learn based on experience. Which translates into being a bratty kid who throws a fit when his ice cream falls on the floor and runs away in a huff. When Molly finds him in the bushes next to a dead bird, he says he didn’t do it. He also tells her she has pretty hair which is a really creepy way of trying to kiss up to an adult when in trouble. I’d call that standard kid behavior as well, but in the show, we don’t know the truth of his actions.

At the end of the episode, Molly is still hiding her pregnancy from her husband and boss while trying to decide what to do next. She is also struggling to make sense of what really happened to her on the space station. Out of the shadows, the stalker on her street is back and he steps into the light this time. It’s the astronaut who supposedly killed himself after experiencing something similar, but he is alive, knows what she’s is going through and tells her to trust no one before disappearing again. 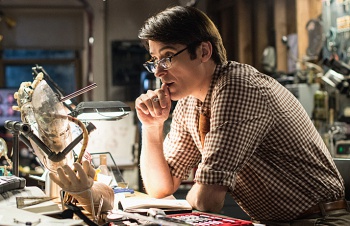 In a side story, Molly’s husband John, played by ER’s Goran Visnjic, is an inventor on a quest to program machines with a need for connection with humans. He theorizes this is the best way for a computer to understand how to interact with people. So he built an android and put it in his own home, raising it with Molly as their own child since they can’t have their own. The fact that the son is a machine isn’t revealed until about 15 minutes into the show and even then it is done in a quiet and matter-of-fact way instead of an overdramatic scene which I give the show’s writers a lot of credit for.

John is facing an uphill battle to get others to accept his son. He achieves certain victories — like getting him into school — but also some major setbacks — like potential investors questioning if he has a kill switch in place to stop the machines from taking over humanity. Showing that he is emotionally invested perhaps a little too deeply in his project, he responds to one of the corporate suits with: “Do you have a daughter? Do you have a plan to kill her if she doesn’t turn out they way you want?”

By the end of the episode, he gets the funding he needs, but doesn’t know that the money is coming from the Japanese mogul that is trying to keep an eye on his wife and the effects of her extraterrestrial encounter.

This side story also sets up what is likely the major theme of the series: the need for connection. Molly feels disconnected upon her return to Earth; her husband is connected too deeply with his creation; and there was some kind of connection between Molly and…something (aliens?) on the space station that has resulted in her impossible pregnancy. There was also a great scene between Molly and John arguing about their son where Molly questions if the boy really loves them or is just cleverly programmed to say and do the things that we associate with love. It’s these kind of questions that great scifi entertainment is based on. Not space ships and aliens and robots, but the questions these stories raise about ourselves as human — Extant is doing a beautiful, subtle, mesmerizing job of bringing these questions to the fore.

The other pleasant surprise is the production quality put into the show. The special effects are as good as any film. Too often a TV show’s smaller budgets and tighter schedule doesn’t allow for special effects to look as good as they do in summer blockbuster movies, but the producers here clearly took the time to do it right. The technological advances on display in the daily life of this family look real and normal for the near future. And they aren’t the focus like they are in other shows that rely flashy effects to gloss over poor writing and gaping plot holes.

I went in with low expectations and came out with plans to watch the rest of the series this summer — and I recommend anyone who likes their entertainment smart as well as compelling do the same. If you missed the premiere episode, you can catch it for a limited time on CBS.com or on Amazon all summer if you are a Prime Member.