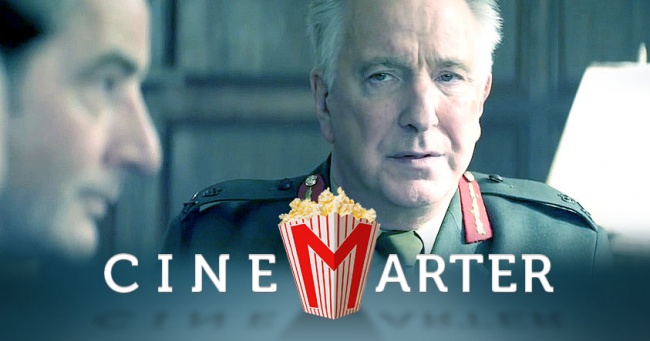 While we’ve seen a lot of movies about modern warfare, only a few have really delved into drone strikes. I would put money on the number of theatrical films dealing with this issue being less than five. And that’s a little odd considering how many drone strikes take place every year, and how complicated an issue it is to talk about. But, then, maybe movies aren’t the place to have that discussion. Eye in the Sky is a film that attempts – and in large degrees succeeds – in bringing various viewpoints into the conversation about drone strikes.

The story follows a bunch of people in rooms around the world who have to decide whether or not to execute a drone strike. The biggest proponent is Colonel Katherine Powell (Helen Mirren), who has spent six years tracking a terrorist, and now has several in one location – as well suicide bombing jackets, which are going to be equipped and detonated in a very short amount of time. On her side is Lieutenant General Frank Benson (Alan Rickman), who is the liaison between her and several political figures. The drone pilots are 2nd Lieutenant Steve Watts (Aaron Paul) and Carrie Gerson (Phoebe Fox). There are also lawyers, and a man on the ground (Barkhad Abdi), involved in this process. 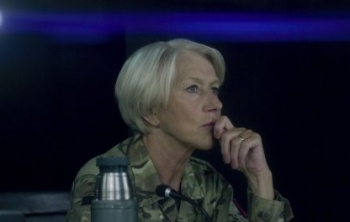 So, why is there a debate at all? Well, beyond the obvious “should drones be used at all” question, within the projected collateral damage zone is a child. So, the question becomes: Is putting an innocent child at risk of death worth shooting off the drone strike? We hear from all sides: political, moral, and legal. Meanwhile, suicide vests get strapped to terrorists. It’s a very time-sensitive issue, and Eye in the Sky contains more than a couple of thrilling moments because of this.

Beyond its ethical and moral questions, Eye in the Sky also brings in criticism of the bureaucratic, up-the-ladder, approach to decision-making. More than once, people in power pass the baton to those higher up on the chain of command – not because they don’t have the authority, but because they don’t want to face any potential repercussions of a decision. Not only is this portrayed as ludicrous, it’s also potentially deadly; due to the time-sensitive nature of the issue, not making a decision could result in dozens of lost lives.

Eye in the Sky is a very narrow movie, focusing on the moral, political, and legal consequences of drone strikes. It manages to do so in an efficient, thrilling, and genuinely thought-provoking manner.

Eye in the Sky also, more or less, delivers an unflinching look at its subject matter, even going places at times that I honestly didn’t expect, if only because it’s a theatrically released movie with name stars in it. These things often take a more sanitized approach, and while I’m sure it could be darker and more thorough, it does a pretty good job in that area. Its last few scenes, in particular, are haunting – in large part because of the direction it takes.

Now, don’t go in expecting a strong character study. Almost everyone here is a conduit through which Eye in the Sky can argue its points. They have personalities, but they’re serving larger purposes. We don’t need to know much about them beyond their beliefs about the issue at hand. Anything else would be bloat and, honestly, irrelevant. This is a movie with a very specific focus, and it accomplishes all of its aims with great efficiency. It’s never dull, it’s got a lot of competing viewpoints, and it does it all in just over 100 minutes.

In order to lend credibility to each presented perspective, the people behind Eye in the Sky have cast good actors. Helen Mirren is someone who just exudes confidence and intelligence. Alan Rickman spends most of his last live-action role rolling his eyes at bureaucracy, but then delivers what’s probably the film’s best line near the end. Aaron Paul and Phoebe Fox bring emotion into the mix as the drone pilots. They have to command the screen often without directly interacting with each other, and primarily through dialogue, and they all pull it off effortlessly.

Eye in the Sky is a very narrow movie, focusing on the moral, political, and legal consequences of drone strikes. It manages to do so in an efficient, thrilling, and genuinely thought-provoking manner. Thanks to a strong cast, great direction from Gavin Hood, a solid screenplay, and a fantastic scenario, it manages to bring many varying viewpoints together in a way that’s not preachy, but in a way that’ll make you think. It “goes there,” so to speak, and is a movie that’s hard to stop thinking about. Eye in the Sky is a rare film about drone strikes, and one of the first that’s absolutely worth seeing.

Bottom Line: Topical, powerful, and presents several points of view, Eye in the Sky is probably the best movie about drone strikes yet.

Recommendation: If you have any interest in the subject matter, you should definitely see Eye in the Sky.